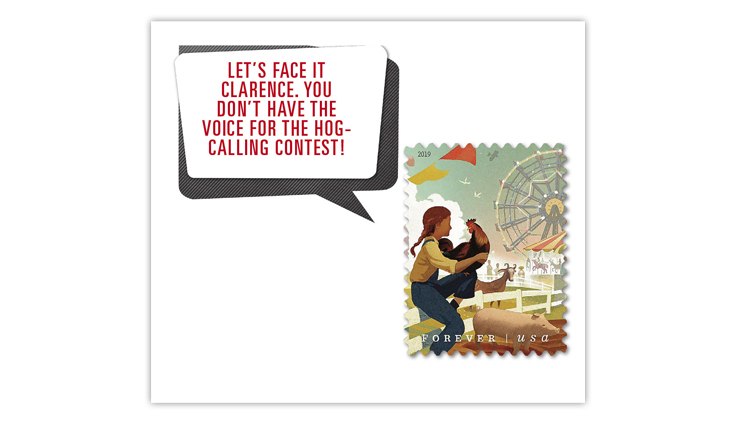 The cartoon caption contest for July featured one of the stamps from the State and County Fairs strip of four forever stamps issued July 25. The stamp shows a girl sitting on a fence, holding her prize hen.

The most popular concept among the entries was nicely captured by Bob Englander of Valencia, Calif.: “What do you mean you’re afraid to go on the rides? Are you ch___?  Oh, yea, I guess you are.”

Another popular theme was the mortality that comes with being a hen. For example, David Goldsmith of Salem, S.C., had the girl saying, “Let’s steer clear of the fried chicken stand.”

Several entries used plays on words, as in this gem from Steve Kotler of San Francisco, Calif., “I’d enter you in the egg laying contest, but first prize is just a poultry sum.”

The winner for the philatelic side of the contest comes from Charles Wales of Ashburn, Va.: “You can crow about winning, but if you ever peck at my stamps again, your doom is certain!”

On the nonphilatelic side, the winning entry was from John Hamilton of Lawrenceville, Ill.

“You’ll have to get up at the crack of sunset now!” by John Barrera of Concord, N.C.

“Fair or fowl, I can always count on stamp collecting,”  sent by Bob Klass and Katy Globus of Sacramento, Calif.

“Why did the chicken cross this stamp? To be included in the design,” by Carolyn Marks of St. Paul, Minn.

“I won at the ring toss game, and won this rooster — now what?” from Jack Leonard of Hatboro, Pa.

“Wait a minute, I thought I ordered a parakeet!” from John Hugney of Auburn, Wash.

“A sky that color can only mean a tornado’s coming!” by David Schwartz of Commack, N.Y.

“I don’t want a ride, it looks too much like a rotisserie!” from the Rev. David Mulligan of Marshfield, Vt.

Thanks and a tip of the hat to all who entered. The next contest will be announced in the Sept. 9 issue of Linn’s.