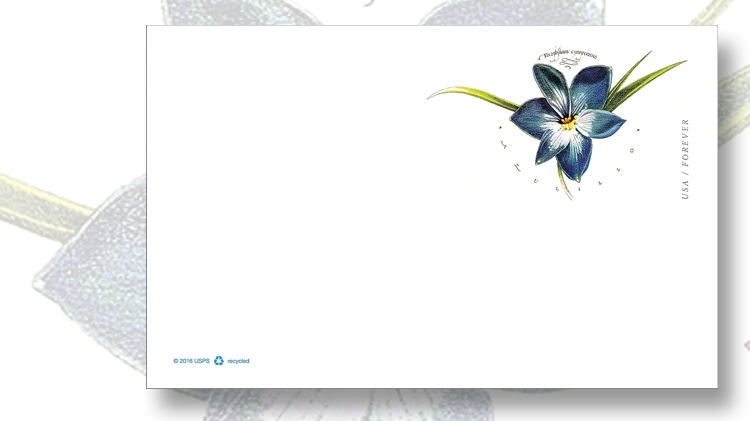 The United States Azulillo Chilean Blue Crocus forever postal card will have a locally hosted first-day ceremony Aug. 11 at Americover 2017 in Independence, Ohio. Lloyd de Vries discusses the card and the show in his First-Day Covers column in the July 24

It’s been rather warm of late in Sidney, Ohio, where the Linn’s editors ply their trade to bring you the absolute best in philatelic reporting and feature writing. Speaking of which, the presses are spooling up to print the July 24 issue of Linn’s Stamp News that goes in the mail Monday, July 10 to subscribers. Here we unveil a few teasers of exclusive content to pique your philatelic curiosity.

Why is a U.S. postal card picturing a Chilean blue crocus being issued in Ohio?

Lloyd de Vries, in First-Day Covers, provides the answer. He also notes that the 10 Disney Villains stamps issued July 15 “will be a challenge for most cachetmakers” because of the rigid copyright protections Disney attaches to the use of its characters’ images, to include payment of substantial fees.

The stamps, issued Sept. 8, 1895, pay tribute to Nicolas de Pierola, on the occasion of his second election as the president of Peru. These and other stamps of Peru “are great fun to collect, with many unexpected challenges,” writes Thomas P. Myers in this month’s Stamps of Latin America.

O’Donnell, Texas, pays tribute to a star of the popular television Western ‘Bonanza’

Dan Blocker, who portrayed Eric “Hoss” Cartwright on the long-running show, is memorialized on a July 6 special postmark from the Texas town where he lived as a child. Linn’s associate editor Michael Baadke features the postmark and provides a succinct biography of Blocker in Postmark Pursuit.