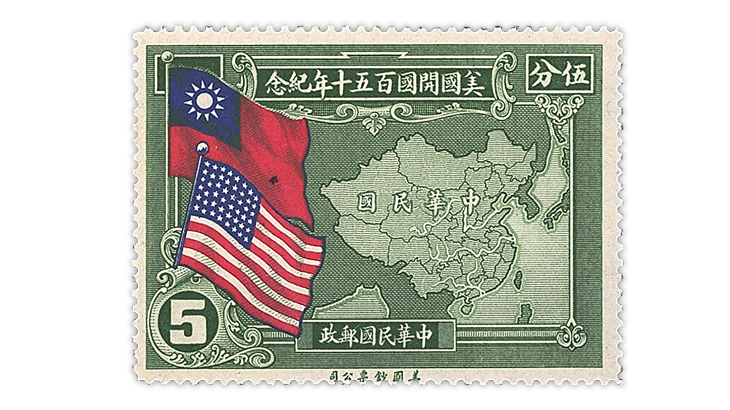 China’s set of four Chinese and American Flags and Map of China stamps (Scott 364-367) issued July 4, 1939, to commemorate the 150th anniversary of the United States Constitution is in demand and selling for more than Scott Standard Postage Stamp Catalogu

On July 7, 1937, in what many historians consider the opening shots of World War II, Japan launched a full-scale invasion of China. The capital, Beijing, fell quickly to the invading Japanese, but the Chinese held on and continued to fight the invaders from unoccupied parts of the country.

Chinese resistance was led by the Kuomintang (Nationalist) government and the Chinese Communist Party. Although formally presenting a united front, the Nationalists and Communists rarely cooperated and fought independently of each other.

European countries largely turned a blind eye to the conflict. The Soviet Union provided some aid to their Communist comrades, while the United States offered limited assistance to the Chinese government.

Grateful for whatever support they could get from the United States, on July 4, 1939, the beleaguered Chinese issued a set of four beautifully engraved multicolor stamps (Scott 364-367) celebrating the 150th anniversary of the U.S. Constitution.

The stamp design used for all four stamps features the Chinese and American flags and a map of China. We previously tipped this set in the Stamp Market Tips column in the Nov. 25, 2013, issue of Linn’s.

This is not a scarce stamp set, as it was widely sold by approval services in the United States and is often found in old worldwide stamp collections. However, it is a very popular set both here and in China. Flags are one of the most popular topical subjects with Chinese collectors, which helps explain the set’s popularity.

We believe that this set is undervalued in the Scott Standard Postage Stamp Catalogue, which values it at $14 in unused, hinged condition and $4.75 in used condition. Unused, lightly hinged sets are selling for around $20, while used sets regularly sell for $8 or more. Sets in very fine grade and mint, never-hinged condition bring $25 or more.

Where to start a collection of U.S. Official stamps