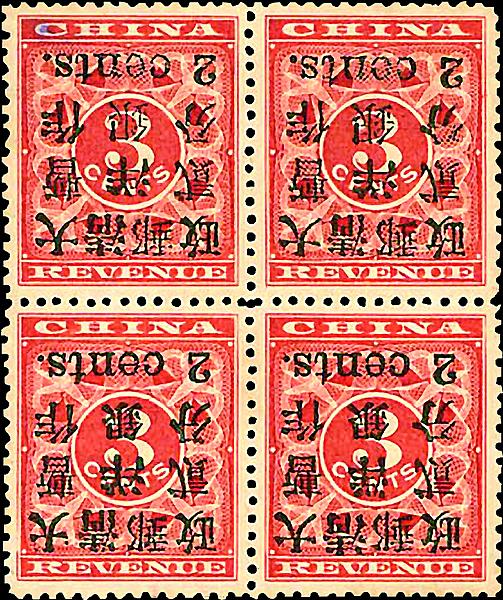 Interasia Auctions will offer this unused block of four of China’s 1897 2¢-on-3¢ red revenue stamp with the surcharge inverted in its Nov. 1-4 public auction.

Interasia Auctions will conduct its next public auction Nov. 1-4 at the Excelsior Hotel in Hong Kong’s Causeway Bay.

The 4,500 lots in this four-day sale are described in five auction catalogs encompassing Asian stamps and postal history, the People’s Republic of China and liberated areas, Northeastern provinces of China cancellations and Hung Hsien Empire, part two of the Elling O. Eide collection of local posts of China, and Hong Kong and treaty ports.

The material is presented with value estimates in Hong Kong dollars, roughly equivalent to 12.9¢ in U.S. dollars as of mid-October.

The Asian stamps and postal history sale includes more than 120 lots of China’s red revenues, stamps intended for revenue use that were overprinted with a black surcharge for postage and issued in 1897 as the Chinese government post undertook responsibility for the mail.

With the urgent need for these provisional stamps, overprint varieties occurred, including inverted surcharges on two stamps.

The invert on the 2¢-on-3¢ surcharged red revenue (Scott 79a) is one of several varieties known for this issue. Multiples are particularly scarce.

Interasia has on offer a block of four of the 2¢-on-3¢ with inverted surcharge, one of just nine blocks of four known, according to the catalog description.

The block is described as having deep bright color, near perfect centering, faint traces of foxing on a few perforations, and “practically full original gum.” It also has an F.Z. Chun guarantee handstamp on the reverse just showing through to front.

A 1931 rarity of the Chinese red posts is offered in the auction of People’s Republic of China and liberated areas.

An example of the 1¢ rose red stamp on newsprint, affixed to a small piece and tied by a red undated round handstamp, is described by Interasia as the rarest and most important stamp of the Chinese red posts, being the only recorded example issued by the Chinese Soviet Republic.

The Interasia Auctions catalogs are available online with illustrations and lot descriptions at www.interasia-auctions.com. Online bidding is available; the website offers details.