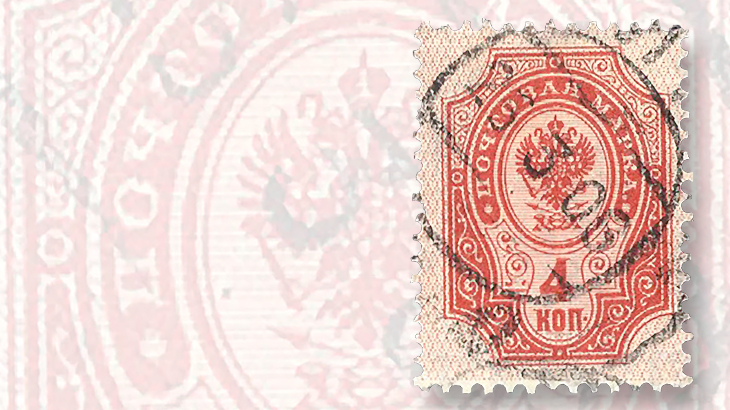 The value of this 4-kopeck denomination of the 1889-1905 definitive type of Russia lies in its type of laid paper and normal or inverted background, visible only with high magnification. Cherrystone sold this example on vertically laid paper in April for $16,100.

A set of five China stamps showing flying geese over a globe issued in 1950 with overprints in various colors sold for $10,925 at the April sale by Cherrystone Auction Galleries. The set is the first listed for Taiwan after the Communist takeover of mainland China. 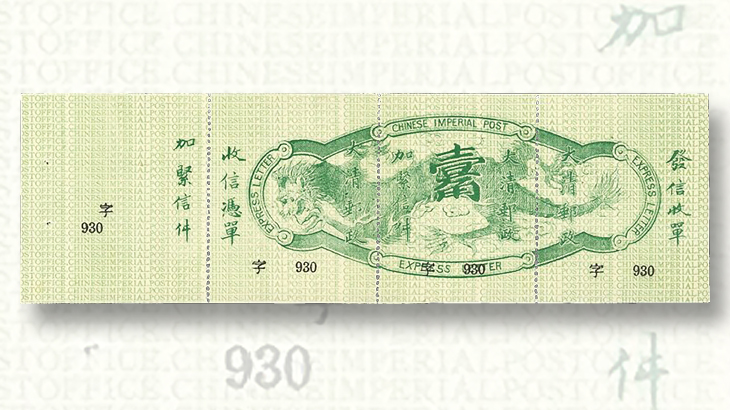 An intact 1905 special delivery stamp of China brought $9,200 at Cherrystone’s April auction. The four-part stamps with a dragon design would be separated in the course of delivery of the item. 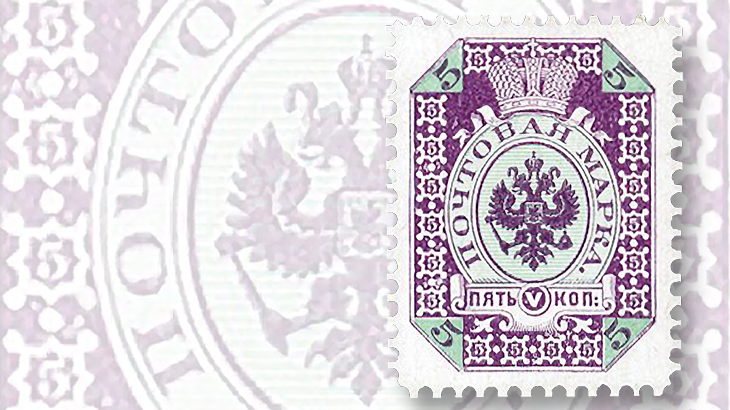 An essay of an octagonal design for a 5-kopeck Russia stamp in 1889 sold for $3,738 at Cherrystone’s April auction. 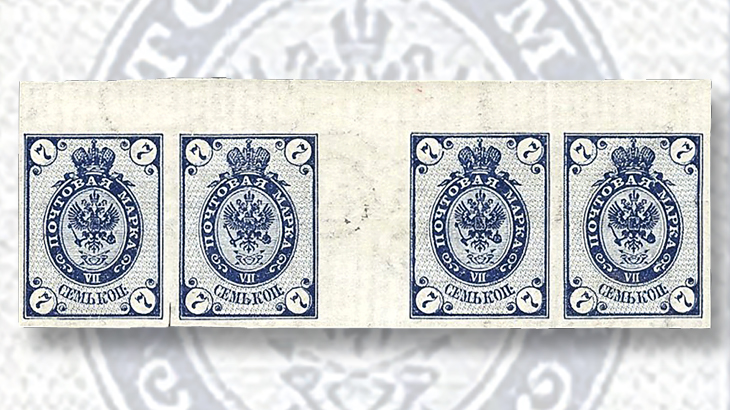 This 7-kopeck stamp from the 1889-1905 definitive type of Russia, in a cross-gutter strip of four from the top of the sheet, brought $12,075 at Cherrysytone’s sale in April. 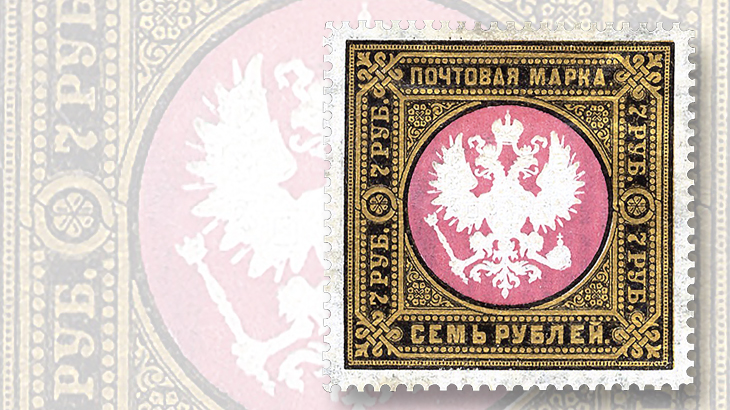 An essay in Cherrystone’s April sale, for an unadopted Russia 7-ruble design of 1884 in pink, black and gold, realized $10,925.
Previous
Next

There were interesting items from many countries, but as is often the case of late, some of the highest realizations went to stamps of China.

One such lot was a set of five stamps issued in 1950 consisting of a single, nondenominated, blue-green design showing flying geese over a globe, overprinted in different colors with denominations ranging from $1 to $20 (Republic of China Scott 1007-1011). The set is the first listed for Taiwan after the Communist takeover of mainland China.

The stamps were issued without gum, and the upper denominations are especially scarce in unused condition. The set in the Cherrystone sale went for $10,925, including Cherrystone’s 15 percent buyer’s commission that is added to all lots.

An unusual special delivery stamp of China, issued in 1905, also made an appearance in the sale.

The Imperial Chinese system for tracking letters sent by special delivery was somewhat cumbersome, involving a four-part postage stamp that was gradually separated over the course of its journey. The sender, the originating post office, the receiving post office and the recipient would each wind up with a piece of the stamp, frequently the worse for wear. Intact foursomes usually can be obtained only unused.

The design of the light green stamp, which measures 8 inches by 2½ inches, features a dragon in an irregular oval stretching across the sections with a matching serial number in black on each quarter. The various types are listed in the Scott Classic Specialized Catalogue of Stamps and Covers 1840-1940 as China Scott E1 to E8.

The first variety shows the dragon facing down; a later type depicts a redrawn dragon facing forward. The example in the Cherrystone sale, with the former design and perforated gauge 11 (Scott E1), was intact, though folded between the middle two stamps. It sold for $9,200.

Among stamps of Russia, there is a scarce error that might be scarce simply because many collectors don’t bother looking for it.

The 4-kopeck denomination of the 1889-1905 definitive type, featuring an imperial eagle in an ornate frame, exists on both horizontally and vertically laid paper, as well as with its light filigree background inverted (Russia Scott 41a and 57Cg, respectively).

The distinction between the right-side-up and upside-down groundwork is pretty subtle, however, and anyone not searching for the error with high-power magnification could be forgiven for overlooking it.

It’s worth searching for, though: The price differential between the normal stamp and the inverted-groundwork variety is several hundred times in the case of the vertically-laid-paper stamp, and many thousands of times for the horizontally-laid.

An example in the Cherrystone sale, on vertically laid paper with neat, central 1906 postmark, was accompanied by a German certificate noting that only a few examples are known. It fetched $16,100.

The 7k from the same series, lacking perforations (Scott 59b) on a cross-gutter strip of four from the top of the sheet, sold for $12,075.

Also in Cherrystone’s Russia offerings, among several beautiful essays for unadopted designs was an ornate square design in pink, black and gold for a 7-ruble stamp, dating to 1884. Printed on gummed, vertically laid paper and perforated, the essay went for $10,925. An octagonal 5k design in purple and green, from 1889, brought $3,738.