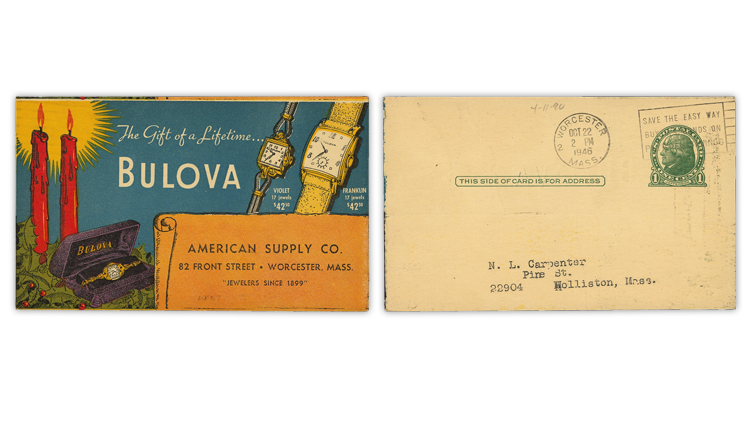 A Bulova watch advertisement is printed on the back of a standard 1¢ Thomas Jefferson postal card. Bulova used this advertising method from at least 1946 to 1955. This card is a new discovery, the sixth Bulova ad design found.

Over several years, I have featured in this column Bulova Watch Co. advertisements on the back of 1¢ postal cards. The ads promoted Bulova watches as Christmas gifts.

We of a certain age will remember Bulova as a dominant force in the watch business before inexpensive mass-produced watches began to flood the United States market.

The six different card designs I have accumulated are known canceled from the mid-1940s to the mid-1950s.

The two watches pictured on the advertisement from the American Supply Co. of Worcester are priced at $42.50 each, a veritable prince’s ransom in 1946.

This was a golden age for advertising by postal card as the 1¢ domestic rate was valid from 1873 to 1952, except for a couple of years when the rate went to 2¢ to help finance U.S. participation in World War I.

The six Bulova cards I have were prepared for use by six different jewelers in six states: Massachusetts, New Hampshire, New Jersey, New York, North Carolina and Pennsylvania.

It would appear that the Bulova headquarters made these advertising designs available to retailers for local printing or provided the cards already printed for retailers to add their addresses.

I am sure there are a great many more of these Bulova ad postal cards out there to be found.