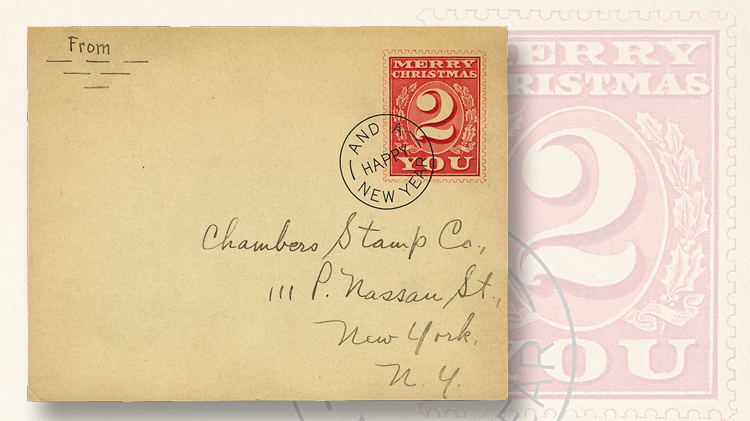 This slightly different version of the card is missing the text greeting and has a return address block. The dealer who created these Christmas greetings was in business until the 1950s, so this may be a second printing. 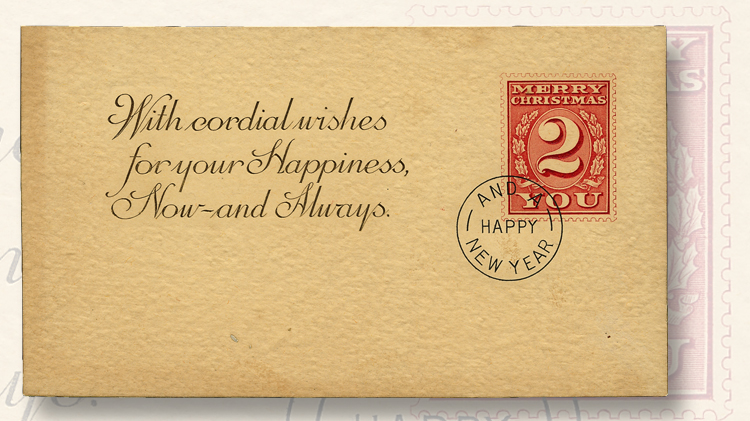 Created as a Christmas greeting card by a Newfoundland stamp collector and dealer, this 1920s-era card is occasionally seen in United States dealer stocks.
Previous
Next

Thanks to Linn’s reader Joe Ward, we now know the origin of the Christmas greeting card illustrated above. He found a listing for it in Ron Lafreniere’s Field Guide to the Cinderella Stamps of Canada, second edition (2015).

The card, of which there are two known formats, was the work of the Rev. Eleaser A. Butler, a stamp collector and a dealer.

According to Lafreniere’s catalog, Butler moved to Sandy Point, Newfoundland, in 1911 with his wife and four children.

Around 1920, he began supplying Newfoundland stamps to collectors around the world; his business continued for about 30 years.

His Christmas card featuring a stamp look-alike was created in 1921 for use as a greeting to his customers.

Apparently some of these cards were saved, because I see them in dealer stocks — not often, but I’ve found four in the last eight years.

According to the Lafreniere catalog, this card is “rarely seen.” I guess that one every two years would fit that description.

The catalog notes that the stamplike image on the cards measures 27 millimeters by 34mm, but does not show the cards in full.

As I’ve already noted, I have two formats of this Christmas greeting.

One is postcard-size and is inscribed, “With cordial wishes for your Happiness, Now – and Always.” This item appears to be intended as an envelope insert.

A thinner, but taller version of the card may have been intended to be used as a postcard, because it has a “From” area in the return-address corner.

The example shown nearby is addressed, but shows no evidence that it went through the mail. Given that I have three of the postcard size and only one of the “From” cards, I would guess that it is the scarcer of the two.

If you have an example of either size that was sent through the mail, I would appreciate your sharing it. Please send it, or a scan of it, to me at either the aforementioned mailing or email addresses.

A Christmas package label that raises a few questions