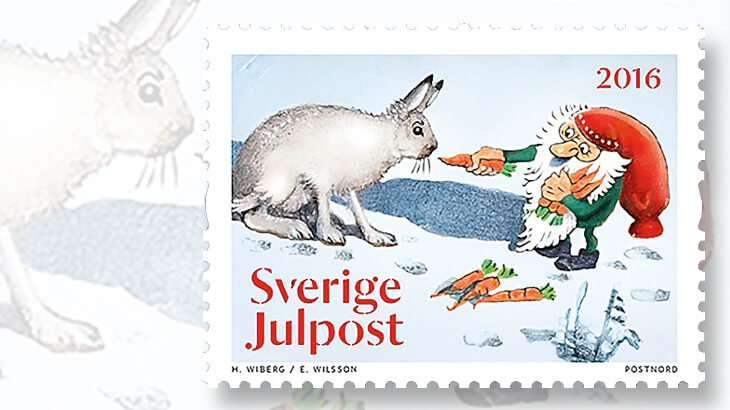 An elf is offering carrots to a rabbit in the illustration by Harald Wiberg shown on one of the five stamps in Sweden’s Christmas booklet. 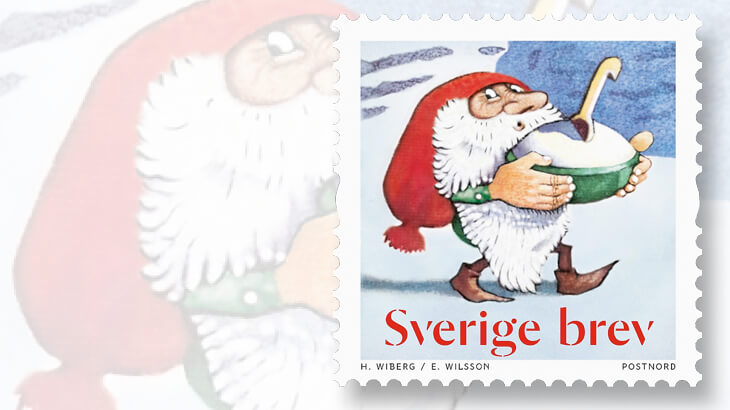 The coil stamp in Sweden’s Nov. 10 Christmas issue pictures an elf with a bowl of porridge. 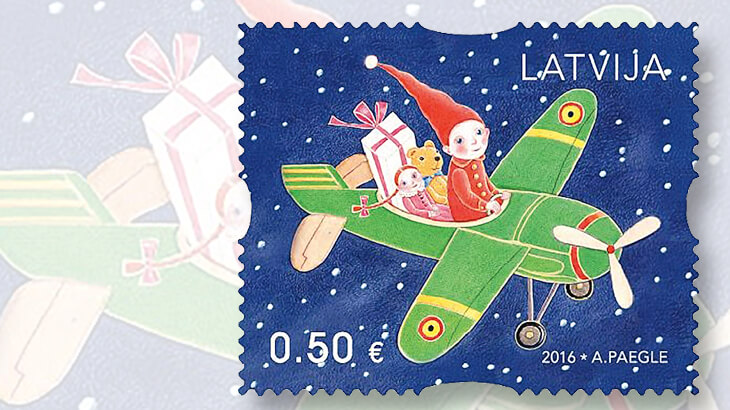 An elf flies a plane through snowy skies on this Christmas stamp from Latvia. 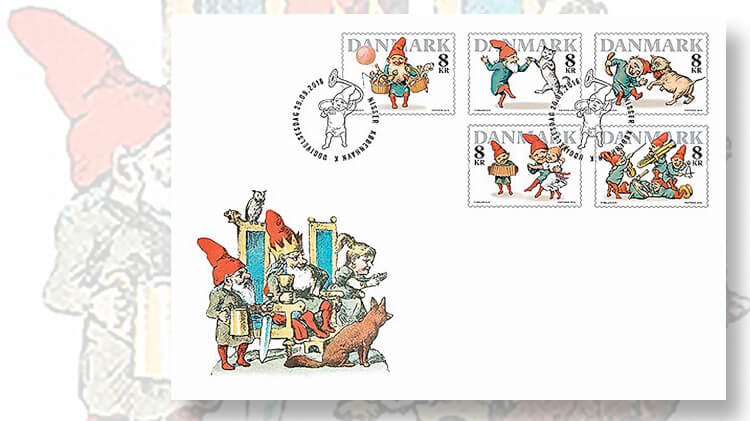 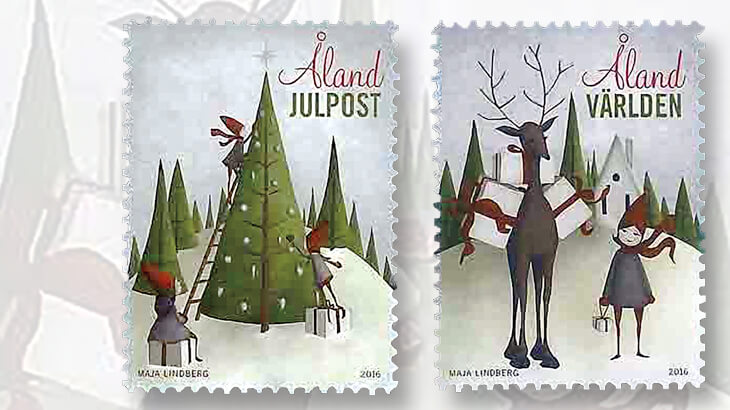 Elves and pixies make an appearance on new Christmas stamps from Sweden, Aland, Denmark, and Latvia.

Part of Scandinavian folklore, barn elves are described as “solitary, mischievous domestic sprites responsible for the protection and welfare of the farmstead and its buildings” on the website of Ingebretsen’s, a Minneapolis retail business dedicated to Scandinavian foods and products.

Known as nisser and tomten, these elves don’t ask for much from humans, according to the website. “They demand only the respect and trust of the farmer and a bowl of julegrot (Christmas porridge) with butter on Christmas Eve. These spirits will not remain in a home where respect is lacking and thus the farm will not thrive and the farmer will be reduced to poverty.”

Five booklet stamps that are similarly inscribed depict the barn elves with animals: a cat, rabbit, dog, moose, and fox. The stamps are se-tenant in booklets of 10.

Views of a minimalist Christmas: keeping the stamp designs simple: For this year’s Christmas stamps, several world postal administrations appear to have taken a minimalist approach in design.

The designs by Eva Wilsson are based on illustrations by Swedish artist Harald Wiberg (1908-1986). Among the children’s books he illustrated are The Tomten and The Tomten and the Fox by Astrid Lindgren.

Aland shows a more modern interpretation of elves on its two Christmas stamps issued Oct. 10. These designs are by another Swedish illustrator, Maja Lindberg.

“I wanted to create a sense of Christmas in my illustrations. A wintry scenery under a starry bright sky and tiny Christmas elves preparing for Christmas,” Lindberg said in Frimarken, Aland Post’s bulletin for collectors.

The international-rate stamp, inscribed “varlden” (world), shows an elf and a reindeer carrying wrapped presents. A church is pictured in the background of the snow-covered landscape.

Cartor Security Printers printed Aland’s Christmas stamps by offset in sheets of 40 (two panes of 20). An illustration of elves pulling a tree on a sled is included in the selvage between the panes.

One of Latvia’s two Christmas stamps issued Nov. 25 shows an elf flying a propeller plane on a snowy night with a doll and teddy bear seated behind him.

Children’s book illustrator Anita Paegle designed this €0.50 stamp, and Latvia’s €0.78 Christmas stamp depicting a man and rooster. The former stamp is for domestic mail, and the latter for mail to other European countries.

Although they appear similar to elves, like their bowls of porridge, and take care of houses and farms, the folklore characters shown on Denmark’s Christmas stamps issued Sept. 29 are called pixies. The designs are based on 19th-century illustrations by Peter Moller.

An article by Jesper Tveden in the December issue of Journal, Postnord’s publication about new Danish stamps, said that Moller “was one of the biggest suppliers of pixie motifs, not just for magazines and for paper cut-outs, but also for some of the earliest Danish Christmas cards. While Christmas cards were having their big breakthrough in the 1880s, Peter Moller was playing a key role as an illustrator, and his happy, non-stop singing and dancing pixies are still just as inspiring.”

Two of the designs feature dancing pixies. On one stamp, a pixie is dancing with a cat, and on another, two pixies dance together while a third plays an accordion.

The other stamp designs feature a pixie musical quintet, a pixie with two baskets full of gifts, and a pixie and a dog.

Each stamp bears a denomination of 8 kroner. Gustav Martensson designed the stamps. They were printed by offset.