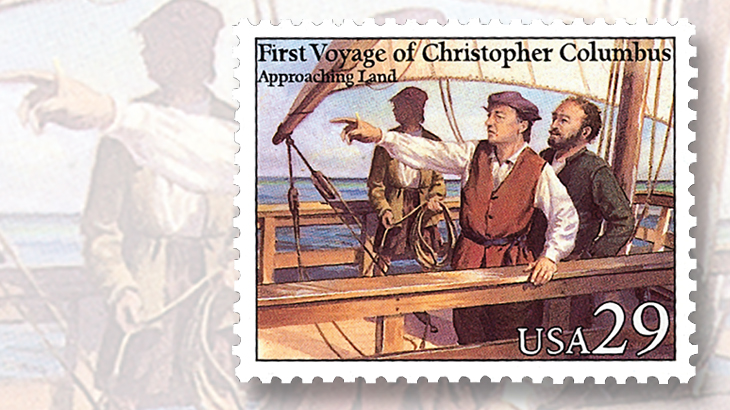 The U.S. Stamp Notes cartoon caption contest for October is the 29¢ Approaching Land stamp from the 1992 Voyages of Columbus block of four. Put yourself behind the pointing finger, and tell me what you think Columbus might be saying. There will be a prize

The discovery of America by Christopher Columbus has been portrayed on many United States stamps. Few have the clarity of the block of four 29¢ stamps issued in 1992 for the 500th anniversary of his voyages (Scott 2620-2623).

I have selected the Approaching Land stamp from the block (Scott 2622) as the cartoon caption contest stamp for October.

The stamp shows Columbus pointing at something; possibly the expected landing place.

Given the current cultural free-for-all in which Columbus is being raked over the coals for his treatment of the native Americans in the Caribbean, there is plenty of material to work with as you consider what Columbus might be saying or thinking.

Will we ever see a Columbus stamp again? How far must the U.S. Postal Service go to eliminate the possibility of offending interest groups who choose to evaluate historical figures by today’s standards rather than in the context of their times?

These are not just academic questions. And Columbus may have an opinion. So, put yourself behind the pointing finger and tell me what you might be thinking or saying about his voyages westward from Europe, his failure to find India, what he found when he arrived, or whatever else floats your boat. Your theme can be political, postal, or historical.

To be considered for the prizes, entries must reach me no later than Oct. 27.