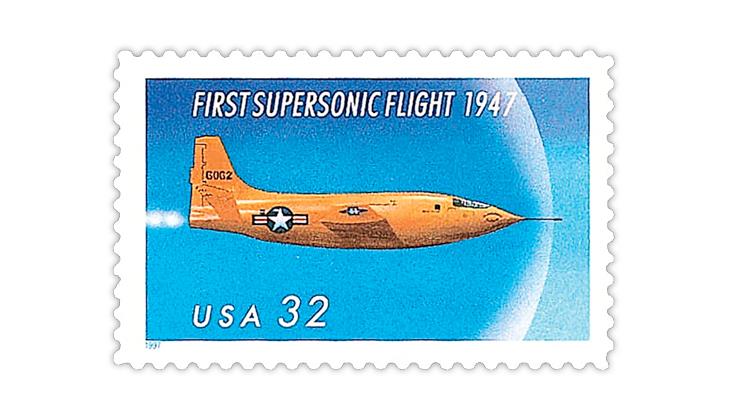 The 50th anniversary of the first supersonic flight was commemorated on a 32¢ stamp issued Oct. 14, 1997. Test pilot Chuck Yeager, who died Dec. 7 at age 97, piloted the X-1 aircraft and lived to see the stamp tribute issued. 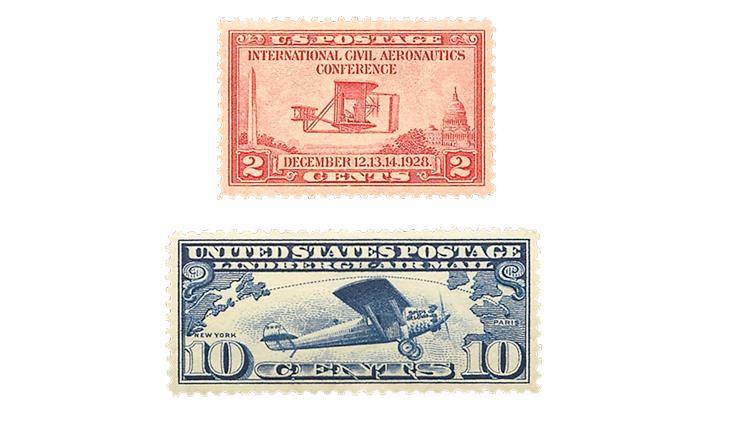 Other aviation pioneers who lived to see their efforts honored on stamps include Orville Wright, who was honored at the 1928 conference where the 2¢ carmine rose stamp was issued, and Charles Lindbergh, whose flight across the Atlantic Ocean was celebrate
Previous
Next

Gen. Charles Elwood “Chuck” Yeager, the United States Air Force officer and test pilot who died Dec. 7 at age 97, is one of just a handful of Americans whose history-making achievements in aviation were commemorated on a U.S. stamp during their lifetimes.

For Yeager, the first man to successfully pilot an aircraft faster than the speed of sound, that honor came Oct. 14, 1997, exactly 50 years to the day after his pioneering supersonic flight.

The 32¢ commemorative (Scott 3173) symbolically shows Yeager’s orange Bell X-1 mid-wing rocket plane nosing through the barrier at a speed of 700 mph and an altitude of 43,000 feet.

The aircraft is now housed at the Smithsonian National Air and Space Museum in Washington, D.C.

Yeager’s breathtaking feat brought America one step closer to spaceflight, but another much earlier breakthrough in an aircraft was similarly honored.

The conference was held in large part to celebrate the 25th anniversary of the Wright Brothers’ pioneer flight, the first successful flight by a man in a powered aircraft.

Among those participating at the gathering was Orville Wright, who piloted the Wright Flyer 120 feet over the course of 12 seconds during the first flight on Dec. 17, 1903.

His brother Wilbur, with whom Orville had developed the successful airplane, had died of health issues at age 45 in 1912.

On the first day of the 1928 conference, the Post Office Department issued two stamps in celebration. The 2¢ carmine rose (Scott 649), is a horizontal commemorative showing the Wright Flyer in the air, with prominent Washington landmarks framing the vignette at left and right.

Charles Lindbergh’s greatest aviation feat was commemorated on a stamp only weeks after it happened, as the Post Office Department issued a 10¢ dark blue airmail stamp (Scott C10) on June 18, 1927.

Lindbergh made his solo nonstop flight from New York to Paris May 20-21, 1927, becoming the first person to do so.

The 10¢ stamp not only features his aircraft, the Spirit of St. Louis, but it also marks his flight route from North America to Europe and includes his last name in the inscription “Lindbergh Air Mail” above the vignette.

The tradition of honoring aviation feats on stamps has since extended into the realm of spaceflight, including a 4¢ stamp celebrating John Glenn’s Feb. 20, 1962, first orbital flight of Earth issued the day of the achievement (Scott 1193), and a 10¢ airmail stamp for the first man on the moon, issued Sept. 9, 1969, less than two months after Neil Armstrong, Buzz Aldrin and Michael Collins returned to Earth as international heroes.

It is an American tradition that stamps honoring individuals for their accomplishments are issued only after the person has died, but the stamps described here and others have duly recognized historic achievements that could not go without a postal tribute.

For Yeager, the Wright Brothers and all the others, the many honors bestowed upon them during their lifetimes were well deserved, including the stamps that pay tribute to what they achieved.