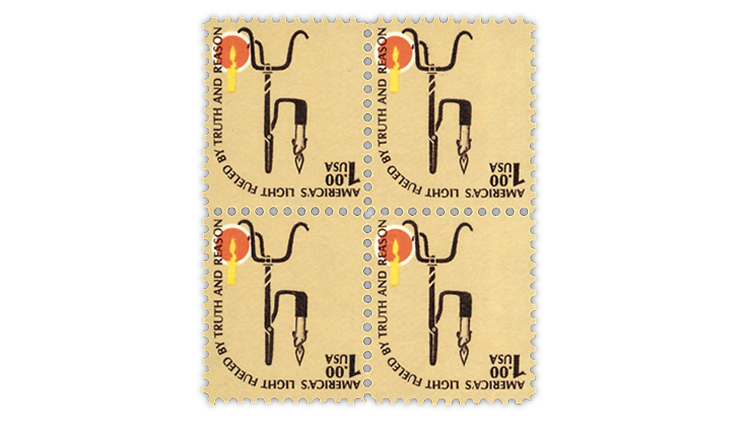 This error block of four 1979 $1 Rush Lamp and Candle Holder stamps is included in the June 2-3 public auction by Cherrystone in New York City. 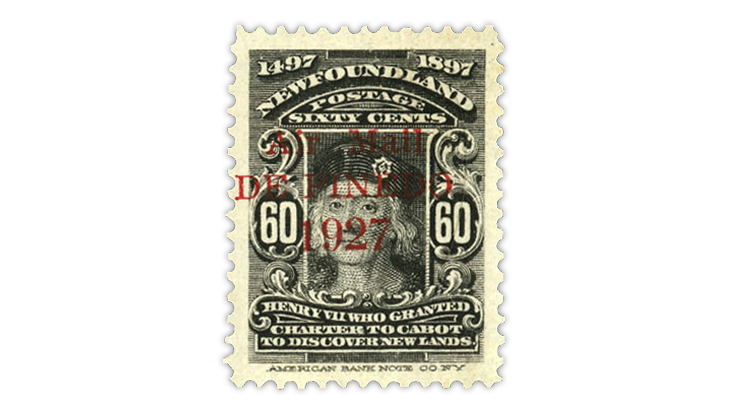 The June 2-3 Cherrystone public auction in New York City will include a rare block of four of the United States stamp error popularly known as the CIA Invert.

The 1979 $1 Rush Lamp and Candle Holder stamp with engraved brown ink inverted (Scott 1610c) earned its nickname when it became known that the error was discovered in a post office purchase by employees of the international spy agency.

The block is one of the 1,215 lots of U.S. and worldwide stamps, proofs, postal history, large lots, collections and additional material offered in the upcoming sale.

A partial pane of 95 invert errors came to light in 1986. Most of the stamps were individually separated from the pane, but there are three known blocks of four, according to Cherrystone.

The auction house describes the stamps in the block on offer as post office fresh and never-hinged.

An individual invert stamp from this issue is valued at $17,000 in the 2020 Scott Specialized Catalogue of United States Stamps and Covers. With an aggregate catalog value of $68,000, Cherrystone has listed the block of four with a starting bid of $55,000.

Offerings in this auction from the 1898 Trans-Mississippi issue include two full panes of 50: one each of the 1¢ dark yellow green Jacques Marquette on the Mississippi stamp (Scott 285) and the 2¢ copper red Farming in the West stamp (286). The stamps in both panes are described as never-hinged, and each pane is offered as an individual lot with an opening bid of $900.

The auction includes a large selection of material from Great Britain and the British Commonwealth.

A 1927 airmail stamp from Newfoundland in this group was created by overprinting examples of the 1897 60¢ black Henry VIII stamp in red (Scott C4).

As the Scott Classic Specialized Catalogue of Stamps and Covers 1840-1940 explains, the stamps were created when Italian pilot Francesco De Pinedo, returning from a long voyage through the Americas, landed in Trepassey Bay and accepted 4 pounds of mail to carry to Italy.

Of the 300 stamps overprinted, 230 were used on correspondence, 66 were presented to De Pinedo and various dignitaries, and four were damaged and destroyed, according to Cherrystone.

“It is estimated that only 33 unused examples have survived to the present day,” Cherrystone said.

In the 2020 Scott Classic Specialized catalog, the stamp in mint condition carries the value of $60,000. That figure appears in italics, indicating an item that can be difficult to value accurately.

The stamp offered in this auction is described by Cherrystone as never-hinged and post office fresh, perfectly centered with wide margins all around, and signed in pencil by experts including Bolaffi and Diena.

A 2020 Philatelic Foundation certificate further identifies the stamp as genuine and never-hinged.

Among the other areas strongly represented in this sale are Austria, Germany and German areas, Italy and Russia.

The catalog for the June 2-3 auction can be viewed on the Cherrystone website, with online bidding options available. Information also is available from Cherrystone Philatelic Auctioneers, 119 W. 57th St., Suite 316, New York, NY 10019.