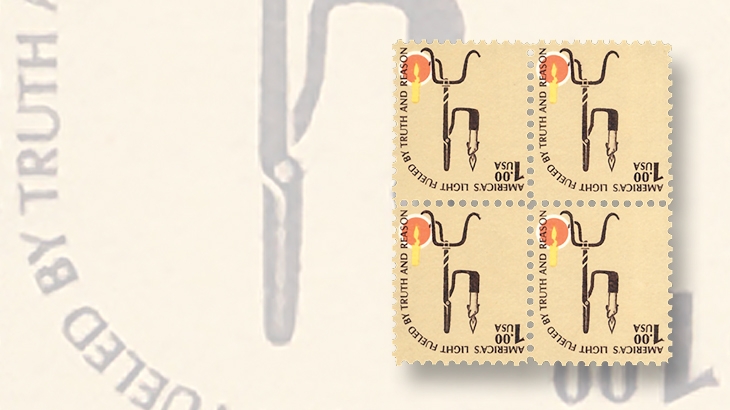 One of only three known blocks of the United States 1979 color invert error of the $1 Rush Lamp and Candle Holder stamp, known as the CIA Invert, brought $71,875 at Cherrystone’s December auction in New York.

The major attraction of the U.S. part of the rarities sale was a block of four of the 1979 color invert error of the $1 Rush Lamp and Candle Holder stamp from the Americana definitive series (Scott 1610c).

The stamp is known as the CIA Invert because the original, nearly complete pane of 95 was discovered in 1985 in office postage by a group of employees at the Central Intelligence Agency, who pooled their money and replaced the inverts with regular $1 stamps, keeping one error apiece and selling the rest to an auction firm.

When the discovery made headlines, the CIA launched an ethics investigation and demanded that the workers involved return the examples they had kept. Some did, and some resigned.

Eighty-five of the error stamps reached the collector market, of which only three blocks survive intact.

The well-centered, never-hinged block in the Cherrystone auction sold for $71,875.