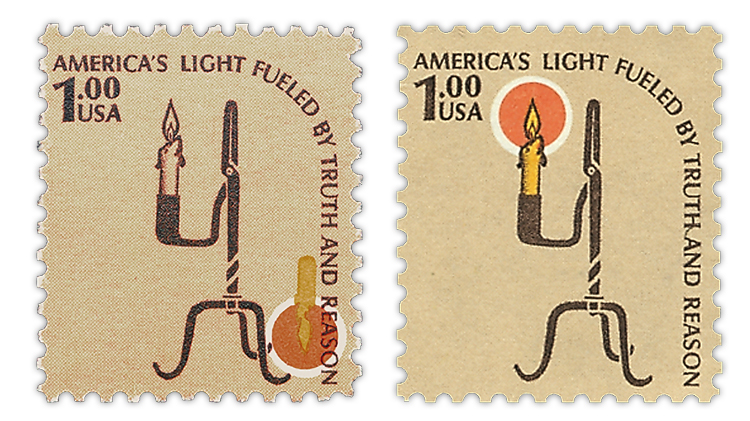 Figure 1. The 1979 $1 Rush Lamp and Candle Holder stamp with intaglio brown printing inverted (Scott 1610c), nicknamed the CIA Invert, is shown on the left, with a normal example of this $1 definitive on the right. 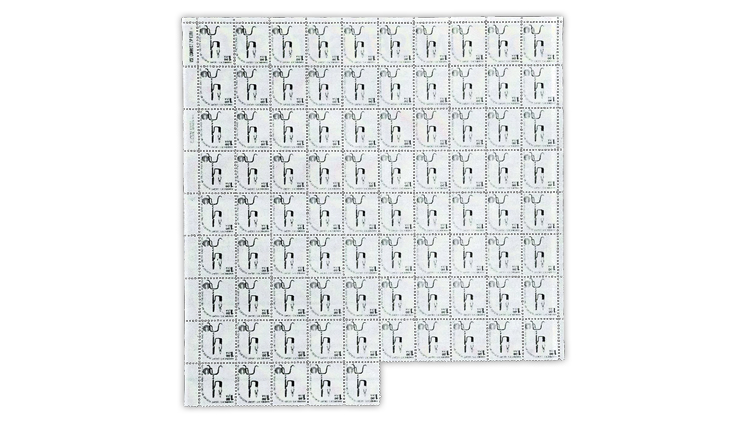 Figure 2. The 85 CIA Invert error stamps still in the form of a pane were sold to New Jersey stamp auctioneer Jacques C. Schiff Jr., who also bought the stamp that was damaged when it was removed from the pane. Nine CIA employees each kept one stamp from
Previous
Next

The U.S. Stamp Notes column headlined “Debunking a philatelic conspiracy theory about the CIA Invert” in the Jan. 20 issue of Linn’s has raised some more questions about this error stamp.

Figure 1 shows the United States 1979 $1 Rush Lamp and Candle Holder Americana definitive stamp with the intaglio brown color inverted (Scott 1610c) on the left and normal example of the stamp (1610) on the right.

After reading the Jan. 20 column about this invert, several Linn’s readers wrote in asking how this error could have happened when the Bureau of Engraving and Printing had been burned by such errors in the past and in theory had instituted procedures to prevent such inverts from happening again.

Another reader asked what happened to the plate block and why has he never seen a picture of it, let alone found any records of its sale?

The second question is easier to answer than the first. Only a partial pane of 95 stamps was purchased at a McLean, Va., sub-post office on March 27, 1986, by “an unnamed northern Virginia business firm” according to the first reports of the discovery. Five stamps from the pane of 100 had already been sold to customers. Unfortunately for philately, those five stamps were taken from the pane as singles from a horizontal strip of five, including the single stamp with the plate number.

Those five stamps have never been reported, either mint or used, and we must assume, as with most stamps, that they ended up lining a wastebasket.

The “business firm” turned out to be the Central Intelligence Agency, thus some call the error the CIA Invert, and the plate number was already gone when the partial pane of 95 stamps was bought (using U.S. government funds) for use on official mail.

After the error came to light, the BEP commissioned an investigation to determine how it occurred, and just as important, why the error was not discovered in-house to prevent it from reaching the public.

The findings were that the answer to the “how” also answered the “why.”

In the case of the $1 stamp, the tan background, yellow candle and flame and the red circular glow were applied first on a Miller offset press.

The next operation was to put the partially printed sheets through the Intaglio-8 (I-8) press to add the candleholder and the text.

Before that second step, pressmen picked up random sheets coming out of the first operation to examine the quality of the print. If the sheet was acceptable, the pressman returned it to the stack of good work. Somehow one sheet was turned 180 degrees when it was returned to the stack.

Here is where the process broke down.

First there was no visual clue for the I-8 press operator to identify an inverted sheet as sheets were fed into the I-8 press gum-side up.

Second the paper was not clipped as it was supposed to be. Because of prior problems with inverts, the BEP required that suppliers of paper in the form of sheets slice a 3/8-inch by 3/8-inch corner off stacks of sheets destined for the Bureau.

Had that been done with the sheets for the printing of the $1 Rush Lamp and Candle Holder stamp, the inverted sheet would have been obvious because a single corner would have protruded from the stack of clipped sheets when it was returned to the stack by the pressman.

But the clipping operation did not happen at the paper mill. The BEP’s report said that a Bureau manager, assuming authority he did not have, tried to save a little money by authorizing the paper supplier to eliminate the corner-cutting operation. The result was that there was no cue to indicate that what came out of the second operation would include a sheet with the brown intaglio ink inverted.

At first the BEP leadership was concerned that because the error had surfaced in the Washington, D.C., area, not far from its printing plant, that the invert had been purposely created and taken by an employee. The investigation disproved that theory because the buyer was identified and had paid face value for the stamps, over a post office counter. No one connected with the printing of the stamp profited by the discovery.

The BEP’s report established that its employees produced 70,390 sheets of 400 stamps (28,156,000 $1 stamps) in the 1985 printing that produced the inverts using sheets with uncut corners. The Bureau’s records showed that no inverted sheets were detected and diverted to destruction.

Ultimately, the sheets of 400, including the sheet of inverted stamps, were quartered into 100-stamp panes and distributed to post offices for sale.

The report concluded: “There was no information developed during this inquiry to indicate intentional wrongdoing on the part of any BEP employee or collusion between a Bureau employee and any person possessing the inverted stamp after release to the United States Postal Service.”

It might be assumed that the United States Postal Service sent notices to its post offices that received $1 stamps from this printing, asking that the stamps be inspected so as to locate the remaining three panes of 100. If that happened, no official result was released. In a timeline article about this inverted error (“Candleholder Invert Scorecard”) published in the April 1994 Scott Stamp Monthly, Wayne Youngblood said that he received an anonymous report that a full pane of inverts had been discovered in Las Vegas, Nevada, and was destroyed locally.

There is a little more to the story. Because the stamps were bought with government funds, they were the property of the CIA. When the nine CIA employees discovered the error, they replaced the inverts with normal $1 stamps. Each employee took an invert, and one stamp was damaged when being torn from the pane. The damaged stamp and the remaining 85 examples were sold to New Jersey stamp auctioneer Jacques C. Schiff Jr. The 85 stamps still in the form of a pane are shown in Figure 2. The image is from a later article about the invert published in the July 2006 Scott Stamp Monthly.

The CIA conducted its own investigation of how the nine employees diverted the government-owned inverts for personal gain. The CIA determined that the employees could be charged with theft or misappropriation of government supplies, and referred the case to the U.S. Department of Justice for possible action. Ultimately, the DOJ declined to prosecute.

But the CIA did discipline the employees. Four were fired for refusing to return the invert they took and lying to investigators. How the remaining employees were disciplined was not released.

There was much discussion in the philatelic press at the time over whether there was any basis for disciplinary action. Many writers contended that the agency was made whole when the employees replaced the errors with normal examples. Obviously the CIA did not agree.

Another contemporary debate centered on whether the government should go after all the examples of the invert that were being dispersed into the philatelic community. If that was considered by the authorities, the idea must have been rejected.

Bottom line: The CIA Invert and all that surrounded it has made for an unforgettable story and catapulted the stamp into legend status. Owning one (I don’t!) gives a collector bragging rights second only to owning a Jenny Invert (Scott C3a, the 1918 24¢ carmine rose and blue airmail error).

Debunking a philatelic conspiracy theory about the CIA Invert