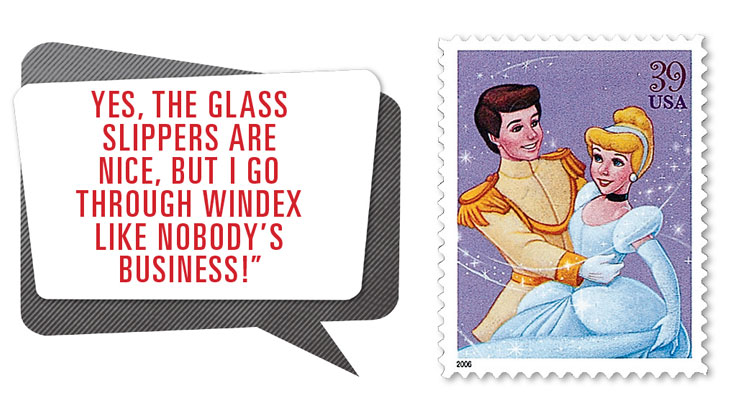 The winner of the nonphilatelic part of the September cartoon caption contest featuring the 2006 39¢ Cinderella and Prince Charming stamp is Jack Leonard of Hatboro, Pa., who focuses on a practical problem of wearing glass slippers. The next U.S. Stamp Notes cartoon caption contest will be announced in the Nov. 8 issue of Linn’s.

The 2006 39¢ The Art of Disney: Romance stamp (Scott 4026) featuring Cinderella and Prince Charming served as the cartoon caption contest stamp for September. You need only glance at the front page of your favorite daily paper to guess at the most popular entry theme.

It is represented here by an entry from Gilbert Schaye of New York, N.Y.: “But are you fully vaccinated?”

Another popular theme centered on dancing at the ball. Apparently the prince may be handsome and rich, but he also possesses two left feet according to several readers.

For example, “Enough of this stamping on each other’s feet. Let’s get down and do the Twist!” came from Reid Hinson of Kill Devil Hills, N.C.

Changing a couple of letters in “prince” enabled another group of readers to comment on postal delivery times. Steve Kotler from San Francisco, Calif., sent, “Tracking shows my package of photos is delayed, but the USPS assures me that someday my prints will come.”

The winner of the nonphilatelic line in the contest, Jack Leonard of Hatboro, Pa., went well beyond the obvious.

On the philatelic side, the prize was won by Marci Jarvis. Her entry sent by email clearly shows the prince has his priorities straight, “One more dance, Cindy, then I have some new stamps to put in my album.”

“Good thing I sent the invitations by messenger. Cinderella might not have made it if I’d sent hers by the post,” from Mary Lou Moseley of Owensboro, Ky.

“Hooray! We can get married. Your father gave me his stamp of approval,” sent by Donald Babcock of Chesapeake, Va.

“What with the pandemic, shouldn’t this be a masked ball?” from Mildred Barylski of Warrenton, Va.

“Someday my mail will come,” by Ken Gilbert of Columbus, Ohio.

October cartoon caption contest takes a ride in a 1953 Corvette