Cinderella stamps sometimes have stories behind them 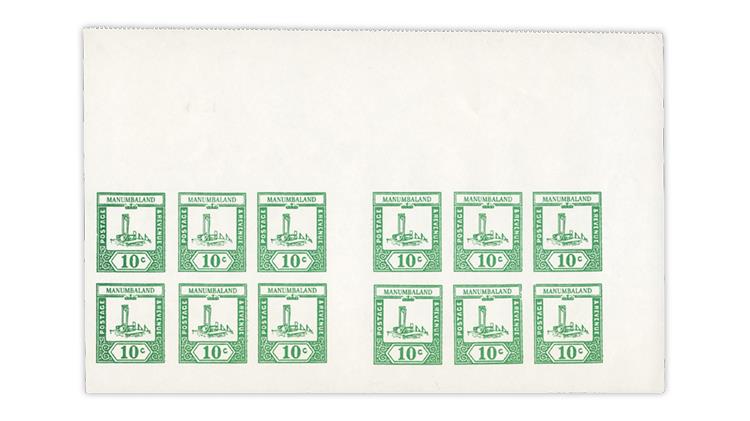 This pane of 12 imperf Manumbaland cinderellas was created by Chicago newspaper columnist Mike Royko to mark his resignation from the Chicago Sun-Times when it was purchased by Rupert Murdoch in 1984. 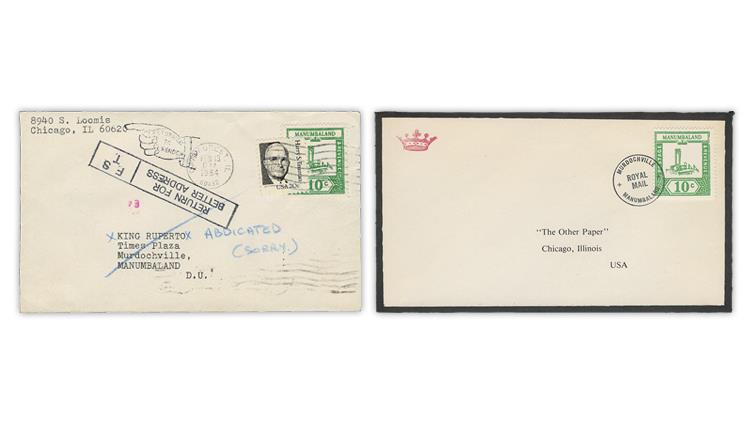 Figure 2. The top coverTK with a 10¢ Manumbaland cinderella and a 20¢ Harry Truman stamp went through the mail in 1984 and was returned for a better address. The cover below it TK is a total fabrication. Both contained the invitation shown in Figure 3.
Previous
Next

Collecting cinderellas is endlessly fascinating. These labels have the appearance of genuine postage stamps, but they are not. Like Cinderella at the palace dancing with the prince, they are pretenders.

Usually they are issued by an individual, or by an authority pretending to represent a legitimate government. The stories that go with them can equal almost anything found in legitimate philately.

This preamble brings us to the stamps and covers of Manumbaland, the creation of Chicago newspaper legend Mike Royko (1932-97).

Royko was a columnist for the afternoon newspaper Chicago Daily News and after it closed for the morning newspaper Chicago Sun-Times for 20 years, from 1964 to 1984. In 1984, the Sun-Times was purchased by Rupert Murdoch of Australia for whom Royko had no respect and called him “the Alien.”

Royko said, “No self-respecting fish would want to be wrapped in a Murdoch paper.”

And so he turned in his resignation and was promptly hired by the Chicago Tribune, where he worked until his death.

In leaving the Sun-Times, Royko didn’t go quietly — in part because the newspaper continued to reprint his old columns with a notice saying he was on vacation.

This situation was covered in a waspish gem of a column titled “In Alien’s tongue ‘I quit’ is ‘vacation.’ ” The end of that column contains the key to the cinderellas shown in Figure 1:

“I suppose this is the kind of confusing problem that we’re going to have to get used to in this modern world, with rich foreigners running in and out of each other’s countries to buy up each other’s businesses.

“And it could be worse. As an anthropologist friend said: ‘It’s a good thing for you the other paper wasn’t bought by somebody from the wealthy but distant and remote nation of Manumbaland.’

“ ‘It is the custom there that when somebody resigns from his job, he is beheaded.’

“I guess I was lucky. But there’s still time.”

At some point, Royko decided to mock the situation with green cinderella stamps featuring a guillotine. The cinderella is modeled on the British colonial key plate issue. Figure 1 shows an imperf pane of 12. Perforated versions are shown on the two covers in Figure 2.

One of these covers went through the United States mail with a 1984 20¢ Harry Truman Great Americans stamp (Scott 1862) paying the postage.

The cover was canceled Feb. 13, 1984, in Oak Forest, Ill. It is addressed to King Ruperto, Times Plaza, Murdochville, Manumbaland. Someone, perhaps Royko, marked out the address and printed “Abdicated (sorry)” after the envelope had been returned to him for a better address.

The other cover did not go through the mail. This black-bordered mourning cover is addressed to “The Other Paper, Chicago, Illinois” and has a simulated “Murdochville, Manumbaland” cancellation.

Inside both covers was an invitation card, as shown in Figure 3. The invitation was to “the Beheading of Mike Royko” at high noon on April 1, 1984.

There is undoubtedly more to this story and perhaps additional cinderella material.

As far as I am aware, Royko was not a stamp collector, so what led him to create these faux stamps and covers is not known. But there is little doubt that Royko enjoyed this means of unloading on “the Alien.”

Figure 1. This pane of 12 imperf Manumbaland cinderellas was created by Chicago newspaper columnist Mike Royko to mark his resignation from the Chicago Sun-Times when it was purchased by Rupert Murdoch in 1984.

Figure 3. Like the Manumbaland cinderellas, this fake invitation plays off words Mike Royko wrote in a newspaper column titled “In Alien’s tongue, ‘I quit’ is ‘vacation.’ ”

Cinderellas for a convict