Cinderellas for a convict 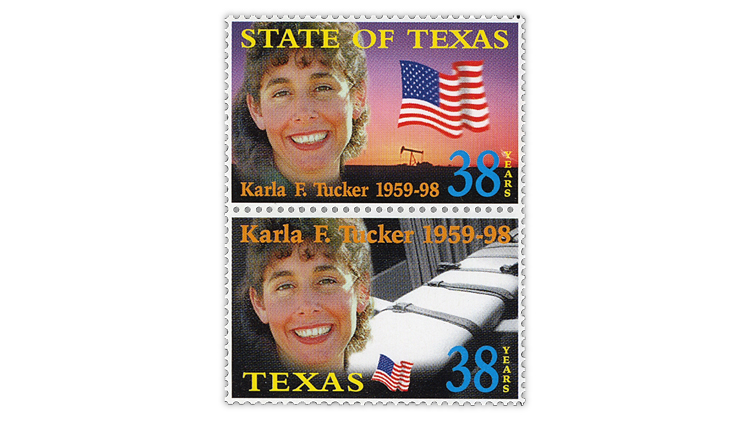 These cinderella stamps were likely created to evince sympathy for convicted murderer Karla Faye Tucker, while her legal team sought unsuccessfully to prevent the carrying out of her sentence of death by lethal injection.

A friend in Denmark, Arne Rasmussen, came up with the pair of cinderella stamps shown above.

These cinderellas are a ghoulish reminder of a grisly crime for which the woman pictured, Karla Faye Tucker, was convicted and sentenced to death by lethal injection in 1984.

Tucker took up residence on death row in a Texas prison. While in prison, she began reading the Bible and professed to becoming a Christian. She later married her prison minister.

Fourteen years of requests for retrial and pleas for commutation of her sentence came to an end in 1998, but not before her case and pleas became an international campaign.

The World Council of Churches, Pope John Paul II, and other U.S., United Nations and world officials took up her cause, but to no avail. She was put to death on Feb. 3, 1998, at age 38.

Nothing is known of the production or source of the cinderellas. But given the smiling visage of Tucker, it is a safe bet that they were produced by someone sympathetic to her cause.