Cities and towns competing for new residents and businesses 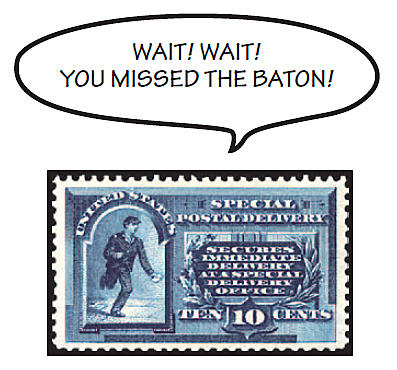 Don Adubato of Virginia wins one of two prizes in the August cartoon caption contest, with this line that puts the Special Delivery messenger on the 1885 Special Delivery stamp on a relay team. The next contest will be announced in Linn’s Oct. 13 issue. 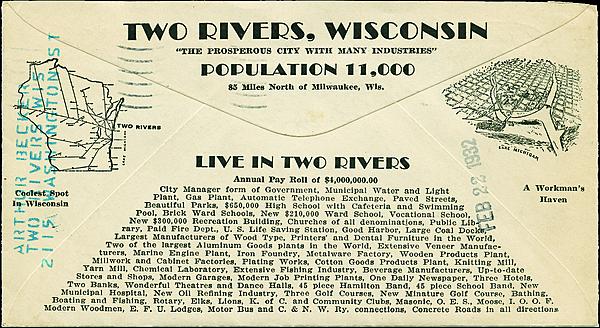 Two Rivers, Wis., promoted its attributes with this 1932 cover, which touted its many features, including a “good harbor.” 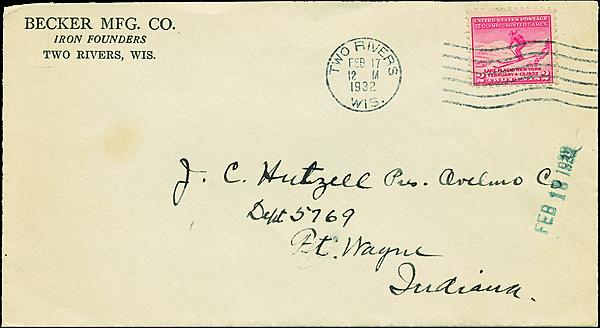 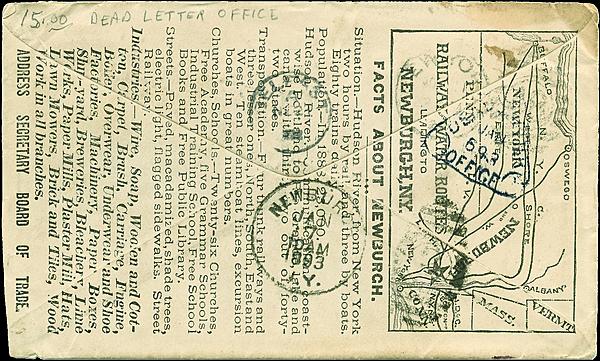 This cover sent in 1893 advertises the best qualities of the community of Newburgh, N.Y., including its schools and industries. 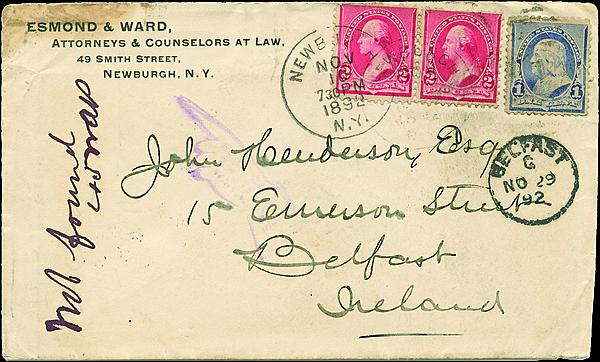 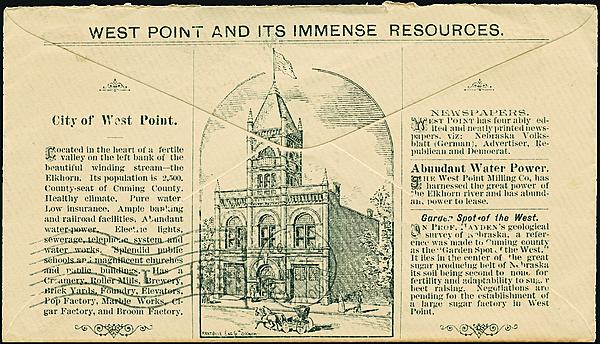 From the 1870s to the 1930s, the mails were used to promote cities and towns across the United States. This example from 1899 was for West Point, Neb., located on the Elkhorn River. 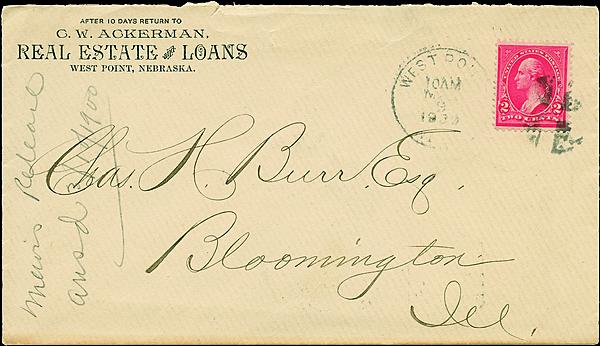 Towns using the mails to advertise for new residents or to lure businesses have been the subject of U.S. Stamp Notes columns of the past. Shown here are three more examples of covers that use the backs to promote towns.

I thought these covers were fairly scarce until I happened upon a dealer who had about 50 different examples, many in the same format. That leads me to believe that there was a company that produced such envelopes for a wide range of locations.

I would have liked to have bought them all, but the checkbook balance would not allow it, though the prices were reasonable.

One example was from the city of West Point, “located in the heart of a fertile valley on the left bank of the beautiful winding stream — the Elkhorn.”

Among its other attractions, according to the text on the cover, are abundant water power, four ably edited newspapers, the pending establishment of a sugar factory, electric lights, sewerage and splendid public schools.

The cancellation date is 1899, and the corner card is a real estate and loan business.

The state of New York is represented by an envelope with a vertical design on the cover back. It was sent from an attorney’s office in Newburgh, N.Y., “two hours by rail and three by boat” from New York City.

Newburgh’s population when this was printed in 1888 was 23,000, though the mailing date was 1893. Curiously enough, the addressee was a lawyer in Belfast, Ireland. Were they trying to recruit?

Newburgh is presented as a transportation center for rail and waterborne traffic. In addition, according to the printed envelope, it had 26 churches, an assortment of schools, and “Free School Books,” paved streets, shade trees, electric light and flagged sidewalks.

The transportation network pictured in the map on the cover supported a wide assortment of industries, including “Wire, Soap, Woolen and Cotton, Carpet, Brush, Carriage, Engine, Boiler, Overwear, Underwear and Shoe Factories.” And more, much more, including a lawn mower factory.

Since the Newburgh Board of Trade signed the back, it would seem they were looking for additional industries.

The third cover displayed here is the 1932 advertising cover for Two Rivers, Wis., billed as “The prosperous city with many industries, Population 11,000, 85 Miles North of Milwaukee, Wis.”

Apparently one would have to like cold weather to consider joining the community, as one of its attractions is listed as “Coolest Spot in Wisconsin” — and that is saying something. Perhaps this was an attempt at truth in advertising.

Other local attractions include an automatic telephone exchange, paid fire department, good harbor, and many industrial plants, featuring two of the largest aluminum goods plants in the world, a marine engine plant, and a 45-piece Hamilton band.

If those weren’t enough to pique your interest, Two Rivers also sported “Wonderful Theatres and Dance Halls, Three Golf Courses, and Concrete Roads in all directions.”

I must find again the dealer who stocked these covers, as they are charming reflections on the development of American society and the urban and rural landscape in the period from the 1870s — my first example — to the 1930s, when these covers apparently went out of style.

Yet the most popular theme for the contest was the messenger’s wish for more comfortable shoes than the severe-looking pair evident on the stamp. An example is this entry from Terry Jordan of Potomac Falls, Va., “The least they should do is furnish me a better pair of running shoes.”

Exercise in many forms was the second most used theme. Mentioned were marathons, track and field competition, health benefits of running, and several referrals to hopscotch. One of these, by Tom Shreve of Modesto, Calif., is, “A pre-work game of hopscotch always get me warmed up for my postal duties!”

Several entries posed the possibility that more than good service was motivating the messenger, an example being, “I can put up with snow, gloom, rain and heat — but those dogs will make me speed up my deliveries!” by Robert Shutterly of Cutler Bay, Fla.

On the philatelic side, Levin Messick of Yorba Linda, Calif., proposed: “Airmail? Never! Pigeons may be faster, but they aren’t as reliable!” I guess the messenger on the stamp did not have the gift of prophecy. It would be a few decades before powered flight was invented.

“No wonder I’m blue! I’ve been trying to deliver this since 1885!” from Bennett Bardfeld.

“For only a dime, I can really make time!” by Edgar Dunlap of Gainesville, Ga.

“Whoa, what do you mean he lives on the 25th floor?” sent by Bert McGann of Berwyn, Pa.

“This is a heck of a job for a former Heisman trophy winner,” from Thomas and Laura Tomaszek of Cedar Rapids, Iowa.

“First, they take my horse. Then they make me wear a uniform. What’s next — bicycles?” by Arthur Richardson of Swampscott, Mass.

“Will anyone believe the raindrops on this letter are merely postage dew?” sent by Steve Kotler of San Francisco, Calif.

“This isn’t what I thought they meant by ‘rate hike’!” by Gary Kufchak of Wadsworth, Ohio.

The next cartoon caption contest will be announced in the Oct. 13 Linn’s.