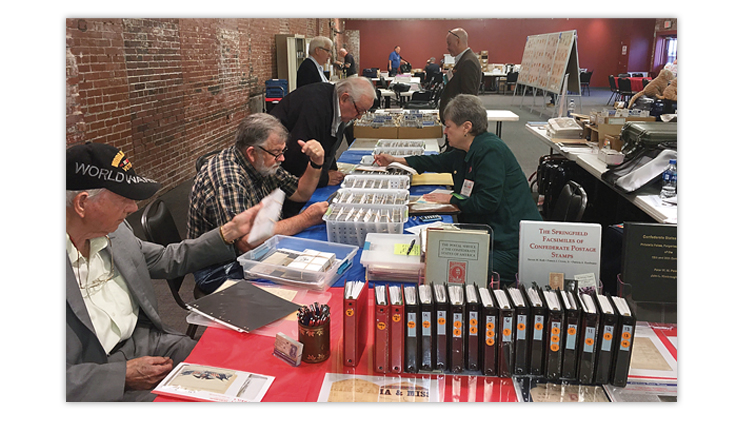 Kaufmann wrote, “More than one attendee mentioned to both trustees and event committee members that they hope this will become a regular event, perhaps held every few years at this same venue.”

Social media posts, photos and other recaps also attested to the event’s success.

The exhibition was part of the World Series of Philately, and Daniel J. Ryterband won the multiframe grand award with his exhibit “A Country Divided: Effects of the American Civil War on the Mails.” In addition to 125 competitive frames, the event included court of honor exhibits. There was also a bourse (sales area) with 10 dealers selling stamps and covers.

During the symposium part of the event, crowds listened to talks by postal historians about the 3¢ Nashville postmaster’s provisional, the evolution of the Confederate army field post service, Civil War postal history and more.

The Kaufmann Civil War Room at the American Philatelic Center was dedicated on the opening day. The room “houses literature, including a bound run of the 142 auction catalogs of John W. Kaufmann, Inc., as well as 11 Capital Mail Bid Sales,” according to the newsletter.

The 2020 annual meeting of the CSA will be held in conjunction with the Napex stamp show June 5-7 in McLean, Va. For more information about the Confederate Stamp Alliance, visit its website.