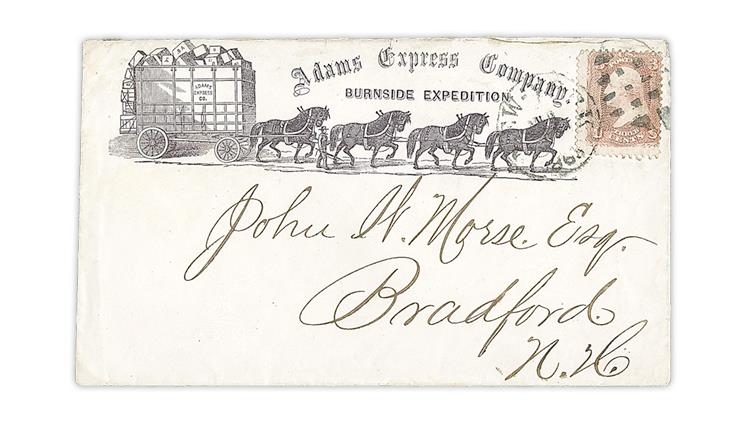 Robert A. Siegel Auction Galleries will offer this handsome illustrated 1863 Adams Express Co. cover for the Burnside Expedition in its Sept. 28-29 sale of United States and Civil War postal history. Siegel estimates the cover at $500 to $750. 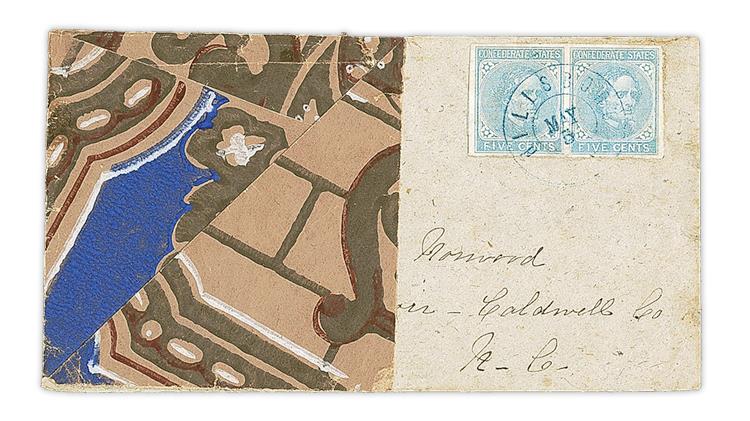 Siegel will auction the Ozarks collection of Civil War adversity covers on Sept. 29. One of the more visually stunning items is this wallpaper adversity cover mailed from Hillsboro, N.C., to Lenoir, N.C. The cover is shown folded open at left to reveal th
Previous
Next

Free franks and autographs, stampless and waterways covers, New York postmasters’ provisional covers and postal history of the 1847 issue through the 1893 Columbians are among the highlights that will cross the auction block Sept. 28.

Siegel provides a brief review of the origins of adversity covers in its catalog introduction to the Ozarks collection:

“In the 19th century, the postal service was the main way to conduct business and find out about events and the welfare of family members. When the Civil War began, the Southern states were blockaded from the Northern states and Europe. Shortages of basic commodities quickly occurred. Stationery and envelopes were in short supply and became more difficult to find as the war continued. This stationery shortage impeded Southerners’ ability to communicate through the postal system.

“Out of necessity, the Southern people became skilled at reusing existing envelopes and making envelopes from alternative sources of paper. These homemade creations are called adversity covers.”

Siegel points out that “adversity covers may be displayed with a flap or portion folded over to be able to see the inside, a perfectly acceptable condition standard. Adhesive stains and light soiling are also typical of Civil War adversity covers ...”

One of the Columbian items up for bids Sept. 28 is a November 1893 registered cover franked with a complete set of the stamps (Scott 230-245). The cover was sent from Westport, Conn., to New York City.

Siegel notes that it is one of only five covers recorded bearing a complete set of the nation’s first commemorative stamps.

“The investment of $16.34 [total face value] was a sizable sum,” according to Siegel.

This registered Columbian cover comes with a 1988 Philatelic Foundation certificate and is offered with an estimate of $7,500 to $10,000.

One of the more attractive express company covers in the Civil War special routes offerings is an 1863 Adams Express Co. cover featuring a large purple illustration of a four-horse caravan with the company’s name and “Burnside Expedition” printed above the horses.

A 3¢ rose George Washington (Scott 65) is tied to the cover by a segmented cork cancel and a “New-York 1863” circular datestamp. There is “minor slicing of edge at top where opened,” according to Siegel.

Siegel explains that “the Burnside Expedition was a series of engagements fought along the North Carolina coast between February and June 1862, the expedition was part of General Scott’s Anaconda Plan, aimed at closing blockade-running ports …”

Siegel is offering this eye-catching Adams Express Co. cover with an estimate of $500 to $700.

Among the more stunning adversity covers in the Ozarks collection are those made from multicolored wallpaper.

A standout in this group is a wallpaper cover mailed from Hillsboro, N.C., to Lenoir, N.C., and franked with a pair of the Confederate States 1862 5¢ blue Jefferson Davis stamp on De La Rue thin paper (Scott 7). Siegel draws attention to the pair’s large even margins and bright shade.

The left side of the cover has been folded open to reveal the colors of the wallpaper: cobalt, red, light brown, dark brown and white.

Siegel describes this cover as “one of the most spectacular wallpaper adversity covers we have ever encountered.” The cover is listed with an estimate of $3,000 to $4,000.

A Confederate States Scott 7 single on a wallpaper cover is valued at $1,200 in the Scott Specialized Catalogue of United States Stamps and Covers.

A single catalog has been prepared for the two-day U.S. and Civil War postal history sale. Full details of the auction, including a downloadable version of the catalog and online bidding options, are available on the Siegel website.