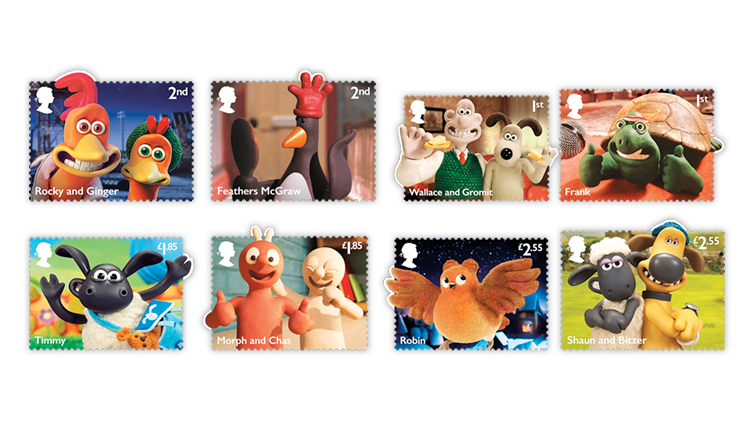 A set of stamps issued Oct. 19 by Great Britain’s Royal Mail shows some of the most popular animated characters who starred in films from Aardman Studios.

An Oct. 19 set of stamps from Great Britain’s Royal Mail celebrates popular characters who appear in films produced by Aardman Studios, an animation studio that creates films using a stop-motion animation technique that involves shaping three-dimensional figures out of clay.

“Dive into the Aardman archive to relive the hilarious exploits, heart-warming tales and ‘cracking’ moments that have made this award-winning British studio one of the world’s favourite stop-motion storytellers,” Royal Mail said.

The stamps feature some of Aardman Studios’ most popular characters, such as Wallace and Gromit, Shaun the Sheep and Chicken Run’s Rocky and Ginger.

Royal Mail offers the stamps as a set of eight, with four additional stamps provided in a souvenir sheet.

The second-class stamps show Rocky and Ginger from Chicken Run and Feathers McGraw from The Wrong Trousers.

One of the first-class stamps features Wallace and Gromit, and the other shows Frank from Creature Comforts.

Timmy from Shaun the Sheep and Timmy Time poses on one of the £1.85 stamps, as do Morph and Chas from The Amazing Adventures of Morph.

A £2.55 stamp depicts Robin from Robin, Robin, as well as Shaun and Blitzer, two more characters from Shaun the Sheep.

The souvenir sheet contains two first-class stamps and two £1.85 stamps; the images come from short films in the Wallace and Gromit franchise.

The two first-class stamps depict scenes from A Close Shave and A Matter of Loaf and Death, and the two £1.85 stamps show scenes from The Wrong Trousers and A Grand Day Out.

David Gold, the director of external affairs and policy at Royal Mail, remarked on the popularity of the characters featured on the stamps.

“This set of stamps will surely bring a smile to everyone’s face,” he said. “These instantly recognisable, iconic animated characters have found a place in our hearts. We are certain they will add a bit of joy to any envelope.”