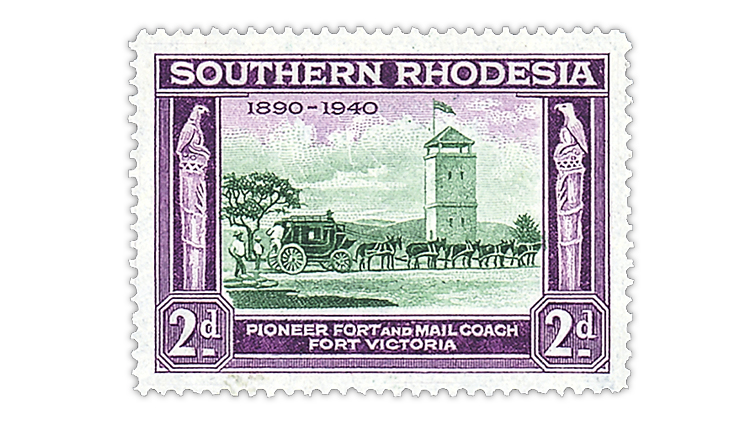 It never ceases to amaze how inexpensive some beautiful classic stamps can be. One such set of stamps was issued in 1940 by Southern Rhodesia.

Southern Rhodesia was established as a self-governing crown colony in 1923. In 1953 it was merged with Rhodesia and Nyasaland to become the Federation of Rhodesia and Nyasaland. Ten years later, in 1963, the federation was dissolved and in 1965 Southern Rhodesia issued a unilateral declaration of independence and became the unrecognized state of Rhodesia. In 1980 it became the Republic of Zimbabwe.

On June 3, 1940, Southern Rhodesia issued a set of eight pictorial stamps commemorating the 50th anniversary of the founding of the British South Africa Co. (Scott 56-63).

This set is of interest to British Empire collectors, worldwide classic collectors and topical collectors.

The Scott Classic Specialized Catalogue of Stamps and Covers 1840-1940 values the set in mint never-hinged condition at only $9.50. A set in used condition is valued at $11.85 with the value in italics. When stamps and sets are more valuable in used condition than in mint condition, questions about used examples arise regarding correct usage in period.

This 80-year-old set of beautifully engraved stamps is a good buy in mint never-hinged condition at $7.50 up to full catalog value depending on how perfectly centered the stamps are. Sets in unused hinged condition sell for $2.50 to $4.