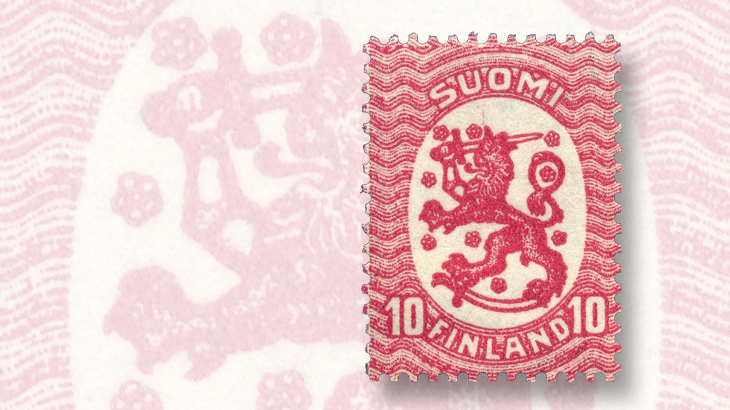 Following his success as the architect of the Helsinki train station, Eliel Saarinen was a stamp designer, using the lion from Finland’s traditional coat-of-arms for all the designs of the 1917 “Helsinki issues.”

One of the first actions of the embryonic Republic of Finland in 1917 was to arrange for postage stamps to confirm its new political identity at home and to the world.

The Scott Classic Specialized Catalogue of Stamps and Covers 1840-1940 refers to the common-design stamps, Scott 83-108 and 110, issued between 1917 and 1930 in a wide range of single colors and a few bicolors, as the Helsinki issue. Specialist collectors, however, refer to the group as the Saarinen issue, in honor of its designer.

Finland is on a peninsula bordered by the Gulf of Bothnia, the Gulf of Finland, Norway, Sweden and Russia. The latter two were historically difficult neighbors: Sweden occupied Finland beginning in the mid-12th century, ceding it to the Russian Empire after losing the Swedish-Russian War of 1808-09. The Swedish influence remains to this day, with both Swedish and Finnish as Finland’s official languages.

The February 1917 revolution in Russia and the abdication of the czar on March 15 left both Russia and Finland without a legal head of state. The temporary Russian government issued a manifesto in March that was viewed by the Finns as canceling the existing postal rules (dating to 1891 and 1900, and requiring the use of Russian stamps on foreign-bound mail).

The problem was that if Russian stamps were no longer to be used, there were no stocks of Finnish stamps to use instead. In April 1917, the Finnish senate began examining how to reintroduce Finnish postal issues.

A small committee was set up to prepare proposals for new stamps, and on June 21 the senate approved the idea of 10 stamps of various denominations, intended for use on all mail deliveries within Finland and abroad.

All of the new stamps were to have the same design: the Finnish heraldic lion, a national image dating to the late 16th century, with the country name both in Swedish (Finland) and in the Finnish language (Suomi).

At one point, it was decided to issue the new stamps on Jan. 1, 1918, but the senate meanwhile raised the postal rates beginning Oct. 1, 1917, and the aim changed to having at least some of the new issues ready then. As it happened, only one of the new stamps, the 5-penni, was ready on that date.

Design sketches for the new issues were drawn by two members of the senate’s committee, Harald Lindberg and Eliel Saarinen, and Saarinen’s basic design was eventually chosen. Some modifications to meet printing requirements were made to it later by Lilius and Hertzberg Co., of Helsinki, who prepared the plates for printing.

Eliel Saarinen (1873-1950) was at that time the foremost architect of his generation in Finland. His first major work was the Finnish Pavilion at the 1900 Exposition Universelle in Paris, displaying his style that came to be called “Finnish National Romanticism.” His Helsinki Central Railway Station (built 1910-14) still stands as a landmark building in the capital city.

Saarinen also became involved in city planning, and was working on a program for greater Helsinki when he was called to help with the new stamp designs. Saarinen’s design talents ranged from buildings and cities to tapestries, furniture, pottery, and painting, and he designed Finnish banknotes in 1909 and 1922.

For collectors interested in all aspects of the Saarinen issues, an exhaustive plate-by-plate study of them is detailed in the 204-page bilingual Handbook of Finnish Stamps, fifth volume, 1986, by the Philatelic Federation of Finland. According to the handbook, the first of the new issues, the green 5p, was printed using chemically etched plates on Sept. 12, 1917, on a two-color press acquired in 1895 from the German press manufacturer Koenig and Bauer.  The printing was done by the state stamp printing office (translated in the English portion of the Handbook of Finnish Stamps as the Charta Sigillata Office or Printing Works).

The Scott Classic Specialized catalog does not indicate watermarked paper for the Helsinki issue, but the Handbook of Finnish Stamps and some other specialist sources say that “edge watermark” paper was used, at least in the earliest issues, with a crown and the words “Suomen Leimakonittori” (Finnish Stamp Office) or “Finlands Stampelkontor.” The watermark on the paper originally was intended to match the denomination of the stamp printed on it — for example, a watermark “pennia 5 penni” — but the Handbook of Finnish Stamps says that mistakes were quickly made, and paper with the wrong watermark for the denomination of stamp often was used.

Inaccurate cutting of the paper also led to partial watermarks or missing ones. Later issues in the series (and new printings of earlier ones) were printed on paper watermarked with a posthorn or a swastika, so the whole matter of Saarinen issue watermarks is either a good collecting challenge or a nightmare.

According to the Handbook of Finnish Stamps, the early Saarinen issues were perforated on old electric-powered Fisher machines that were on hand in the state stamp printing office, with a perforation gauge of 14¼ by 14¾.

The Scott Classic Specialized catalog and other sources also list a perforation gauge of 14 on all four sides of some examples.

Supplies of the first stamp of the long series, the 5p green, Scott 83, were delivered to post offices on Sept. 28, 1917, and issued on Oct. 1. The rose 10p denomination (85) was issued next, on Oct. 15. A 2½p issue had been planned, and a proof of it was submitted to the Universal Postal Union, but the need for that denomination was erased by the postal rate change of Oct. 1, 1917.

A Finnish declaration of independence was proclaimed by the national parliament on Dec. 6, 1917, leading to civil war between resident conservative White Russians and pro-Bolshevik Finnish socialists. But the Saarinen stamps proclaiming Finnish postal independence were well underway, with some denominations reprinted over the years into late 1929.

Eliel Saarinen moved to the United States in 1923 and became a university professor and prolific architect, earning the American Institute of Architects gold medal in 1947. His son, Eero (1910-61), was one of the influential American architects of the 20th century, and three of his designs appear on United States stamps: Dulles International Airport on a 20¢ Architecture stamp in 1982 (Scott 2022); the TWA terminal at Kennedy Airport on a 2005 37¢ Modern American Architecture stamp (3910d); and the Gateway Arch in St. Louis on a 39¢ Wonders of America stamp in 2006 (4044).

Collecting a few examples of the long-running Saarinen issues in your choice of denomination and color will be very inexpensive (many of the stamps are valued in the Scott Classic Specialized catalog at the minimum 25¢).

If you want a perforation variety or scarce imperforate example, those will be selling for several hundred dollars. A full set of the 27 major varieties is valued in the 2016 Scott Classic Specialized catalog at $114.95 unused and $67.60 used.