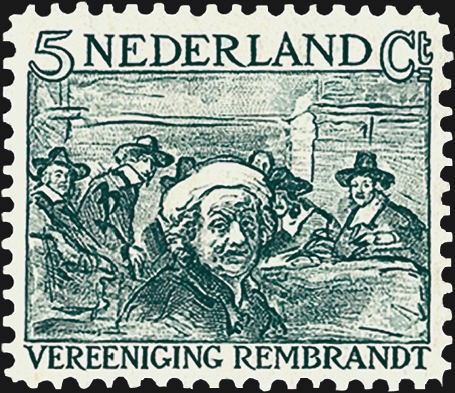 A set of three Netherlands semipostal stamps issued in 1930 show a portrait of Rembrandt and one of his famed works. The surtax benefited the efforts of the Rembrandt Society.

After much quarreling between the United States Postal Service and Congress, U.S. semipostal stamps (stamps sold at a price greater than the postal value, with the surtax used for a special purpose, usually charitable) emerged only relatively recently, in 1998, with a stamp supporting breast cancer research.

Since then, only three other U.S. semipostals have been issued. In contrast, the Netherlands began issuing semipostals in 1906, and has produced more than 700.

The differences between U.S. semipostals and those of the Netherlands are not only of quantity, but of subject matter and purpose.

In addition to aiding breast cancer research, U.S. semipostals have raised funds for families of the heroes of 2001, supported efforts against family violence, and helped to save vanishing species.

Supporting art for the public has not yet been on the USPS semipostal list, and it seems unlikely that it ever will be. But that was the purpose of a set of three semipostals of the Netherlands (Scott B41-B43) issued in 1930 for the benefit of the Rembrandt Association, “Vereeiniging Rembrandt” in Dutch.

Vereeiniging Rembrandt was founded in 1883, in a crisis. A quantity of Dutch drawings belonging to the late distinguished collector Jacob de Vos was being auctioned in Paris, and a group of Amsterdam art lovers felt it was important for the drawings to stay in their native country, and feared the drawings would go to buyers elsewhere.

Pooling their resources, they succeeded in buying hundreds of the drawings and turned them over to the national Rijksmuseum in Amsterdam, ensuring that they would remain in the Netherlands and that the public would have access to them.

The group of some 250 enthusiasts formalized itself as Vereeiniging Rembrandt, honoring Rembrandt Harmenszoon van Rijn (1606-69), arguably the greatest painter and printmaker in Dutch history.

The current members of the society donate the funds necessary for pursuing their goals, but in its early years the organization acquired and donated art objects through loans that were later reimbursed all or in part by the state or the museums receiving the art.

This financial involvement of the government would account for the use of an official government postage stamp to help supply funds for the project.

The semipostals were intended for release in 1929, the 260th anniversary year of Rembrandt’s death, but there seem to have been production problems, resulting in the delay of the stamps until 1930.

The Joh. (Johannes) Enschede printing company in Haarlem, founded in 1703, had been printing Dutch banknotes since 1814 and the country’s stamps since 1866, and employed many expert artists, typographers and engravers. To this day, Enschede prints banknotes for five countries and stamps for 60 nations.

Working for Enschede, Jan Sluijters (or Sluyters, 1881-1957), a celebrated Dutch artist and eventual designer of some 20 Netherlands stamps, produced a vignette with a portrait of Rembrandt in the foreground and, in the background, an interpretation of a 1662 oil-on-canvas painting by the master.

The painting, in the Rijks­museum, is officially titled The Wardens of the Amsterdam Drapers’ Guild, Known as “The Syndics.”
Syndics were inspectors or sampling officials for the quality of dyed cloth, and the painting is sometimes referred to as The Syndics of the Clothmakers Guild.

The stamp design includes the name of the group benefiting from the surtax across the bottom edge.
French painter and engraver Henri-Lucien Cheffer had designed several stamps produced by Enschede, and was asked to engrave a steel die using Sluijters’ design.

However, the result left postal authorities thinking that Cheffer had taken too many liberties with Sluijters’ work.

Cheffer offered to produce another die, but the job was handed over to another artist, Hendrik Seegers, who had worked for Enschede since 1892. Seegers’ take on Sluijters’ design was accepted, and three denominations of stamps were printed, all with the same design, on unwatermarked paper in sheets of 100, perforated gauge 11½.

The amount of the surtax does not appear as part of the stamp design, but is 5¢ for each semipostal.

According to the 1940 catalog Manual of the Stamps of the Netherlands by A. Arthur Schiller and Johannes de Kruyf, these semipostal stamps generated the present equivalent of about $389,717 for the benefit of the Rembrandt Association’s cultural good works.

Since 1930, Vereeiniging Rembrandt, now 11,000 members strong, has not been a named beneficiary of a Netherlands semipostal, but there have been many such issues designated for social and cultural projects.