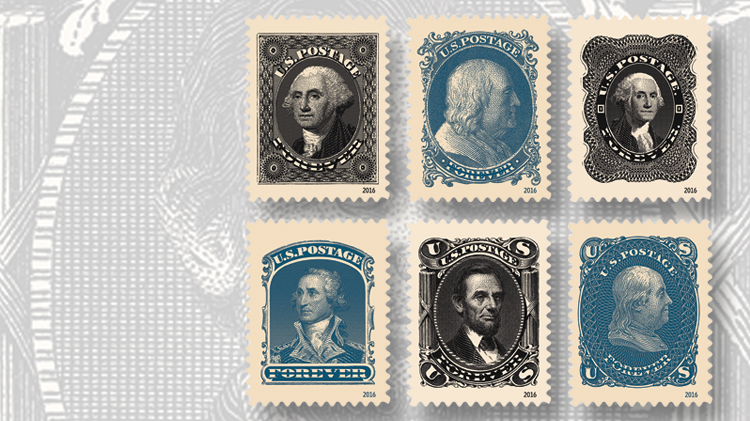 Each stamp in the Classics Forever set reproduces the design of a stamp issued during the classic era of U.S. stamps. The U.S. Postal Service announced May 26 that the self-stick Classics Forever souvenir sheet will have soakable adhesive.

The U.S. Postal Service announced May 26 that its planned souvenir sheet of six U.S. Classics Forever stamps will have pressure-sensitive adhesive that is “water soluble, enabling philatelists to remove these special stamps from envelopes … by soaking them in plain water.”

The Classics Forever stamps will be issued June 1 during World Stamp Show-NY 2016 in New York City.

Collectors have been pressing for a return of soakable stamps for years, but the Postal Service has resisted their calls.

The self-adhesive stamps that Postmaster General Marvin T. Runyon ordered sold in 1992 at the same price as lick-and-stick stamps have been a huge public success.

Mary-Anne Penner, executive director of Stamp Services, suggested in an interview last year that she was interested in producing some stamps that could be soaked.

Her response came as an answer to what she acknowledged were the demands of collectors.

The new Classics Forever sheet has six images of what the USPS calls some of the country’s earliest and “most alluring stamps.”

It marks the first time that a forever stamp will have been issued with soakable adhesive, according to USPS.

It could not be learned if other soakable stamps might be coming from the USPS, or if the adhesive they will carry will enable production of soakable stamps at prices comparable to that of nonsoakable self-adhesives.

Linn’s called that “a day that many stamp collectors have dreaded.”

Collectors like soaking stamps because it provides an inexpensive way for collectors to build their collections.

But the worldwide pressure for self-adhesive stamps has continued with widespread public acclaim.

But that stamp didn’t perform as officials had hoped. When soaked in water, the stamp would separate into layers.

For years, postal officials continued to tinker with the idea, trying 15 years later with a 25¢ Eagle and Shield stamp that sold at a premium.

That didn’t help sales, and Runyon didn’t like the idea of selling a stamp at more than its face value.

When he ordered self-adhesive stamps to be sold at face value, sales of the stamps took off.

In 2006, the USPS eliminated a requirement that stamps had to be soakable.

That doomed the time-honored practice of soaking stamps, long a part of stamp collecting.

The Classics Forever souvenir sheet features intaglio, or recessed, printing, the same process used when the six original stamps pictured on the sheet were first issued.

The stamp designs on the sheet are:

1851 12¢ George Washington, based on a Gilbert Stuart painting.

1851 1¢ Benjamin Franklin, based on a bust by Jean-Jacques Caffieri.

1860 24¢ George Washington, based on a Gilbert Stuart painting.

1866 15¢ Abraham Lincoln, based on photograph by Christopher Smith German.

1861 1¢ Benjamin Franklin, based on a bust by Jean Antoine Houdon.

A folio of 24 of the Classics Forever stamps will sell for $11.28, according to the Postal Service’s USA Philatelic catalog.

Among them are A World Stamp Show Souvenir Portfolio, an electronic edition of the 2015 Postal Guide to U.S. Stamps, and a StampApp, “the only official U.S. stamp collecting app.”

The stamp app will allow users to view all U.S. postage stamps from postmasters’ provisionals of 1845 to the first quarter of fiscal 2016, the Postal Service said.

Individuals may create lists of their own stamp inventories and issues they would like to add, it said.

The electronic guide will also allow for creating lists of various types of U.S. stamps including duck stamps, stamped envelopes and other categories. It will be sold by various e-book retailers.

The Postal Service is also issuing a coffee table book, World Stamp Show Souvenir Portfolio. It will contain information about the U.S. stamps to be issued during the show.

Spaces are provided in the book for the U.S. stamps that will be issued. The stamps must be purchased separately.

These items will also be offered via the USPS online.