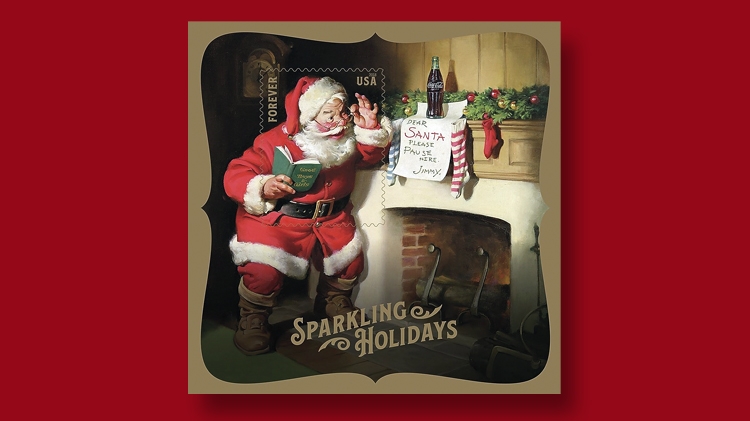 A single-stamp souvenir sheet in the Sparkling Holidays stamp set shows Santa reading a note left for him on Christmas Eve. The note is held in place on the fireplace mantel by a full glass bottle of Coca-Cola. 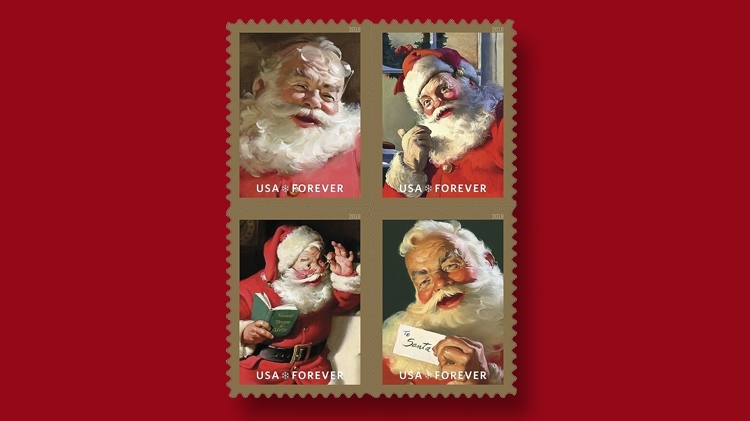 Four portraits of Santa Claus derived from four paintings commissioned by Coca-Cola for its holiday advertising are featured on the new Sparkling Holidays stamps that will be issued Oct. 11 in a double-sided pane of 20.
Previous
Next

The United States contemporary Christmas stamp set for 2018 pays tribute to the image of Santa Claus as refined and promoted since 1931 by the company that produces Coca-Cola beverages.

The nondenominated (50¢) Sparkling Holidays forever stamps will be issued Oct. 11 and offered as a set of four on a double-sided pane of 20 (which the Postal Service identifies as a booklet).

A fifth forever stamp will be featured in a souvenir sheet that includes an extended illustration of Santa admiring a note from a youngster as well as the glass bottle of Coca-Cola left for him on the fireplace mantel.

The die-cut edges of the single stamp in the souvenir sheet crop the scene to show Santa’s face and hands. He is adjusting his eyeglasses with his left hand, while holding an open green book with the title Good Boys & Girls in his right hand.

The designs of the stamps and the souvenir sheet are each derived from archived artwork produced by Haddon Sundblom for the Coca-Cola Co. from the 1940s through the early 1960s.

The souvenir sheet artwork specifically is from 1963.

Other than the Coke bottle shown on the souvenir sheet selvage, there is no direct placement of Coca-Cola product on the stamps themselves.

A first-day ceremony for the Sparkling Holidays stamps will take place at 11:15 a.m. CDT Thursday at the Inn at Christmas Place, 119 Christmas Tree Lane, in Pigeon Forge, Tenn.

Although the double-sided pane will be sold in U.S. post offices, the Postal Service will sell the souvenir sheet only through its mail-order Stamp Fulfillment Services division and online retail site at https://store.usps.com/store.

“Each of the four images portraying a close-up of Santa’s face are details from larger paintings created by Sundblom and originally published in ads for The Coca-Cola Company from the 1940s through the early 1960s. Sundblom is the man credited with refining the modern image of Santa Claus. Art director Greg Breeding designed the stamps.”

According to a brief history of Sundblom’s work published by Coca-Cola, an advertising agency working with the Coca-Cola company in 1931 wanted a Christmas advertising campaign showing a wholesome Santa who was both realistic and symbolic.

With Clement Clark Moore’s 1822 poem A Visit from St. Nicholas as inspiration, Sundblom developed his image of the warm and friendly Santa that has been adopted internationally.

According to the Coca-Cola history: “From 1931 to 1964, Coca-Cola advertising showed Santa delivering toys (and playing with them!), pausing to read a letter and enjoy a Coke, visiting with the children who stayed up to greet him, and raiding the refrigerators at a number of homes.

The original oil paintings Sundblom created were adapted for Coca-Cola advertising in magazines and on store displays, billboards, posters, calendars and plush dolls. Many of those items today are popular collectibles.”

Sundblom’s original oil paintings are described by Coca-Cola as some of the most prized pieces in the art collection in the company archives. They have been exhibited in the Louvre in Paris and in other prominent museums around the world, and some of the paintings are displayed at the World of Coca-Cola, a multimedia attraction and exhibition in Atlanta, Ga.

The design of one of the four stamps in the double-sided pane is from the painting shown cropped on the souvenir sheet. While that stamp vignette, or central design, is similar to the souvenir sheet stamp, the “USA” and “Forever” inscriptions on the two stamps are in different positions.

The souvenir sheet stamp is semijumbo size, so it is slightly larger than the standard definitive size of the stamps on the double-sided pane.

The Postal Service has prepared two first-day cancels, one in black and the other in color, with the words “Sparkling Holidays” featured prominently and surrounded with ornaments or holiday decor.