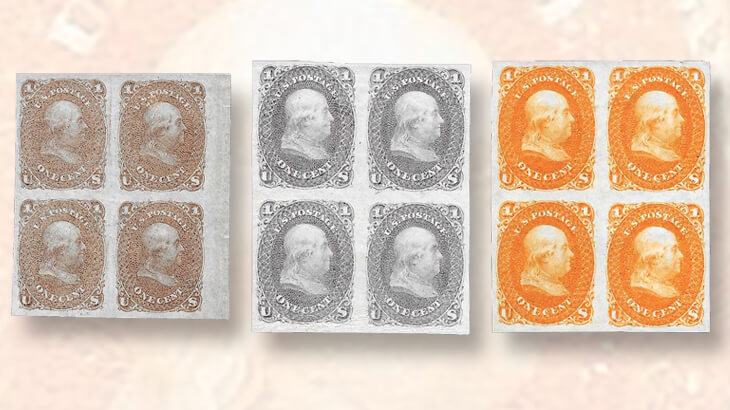 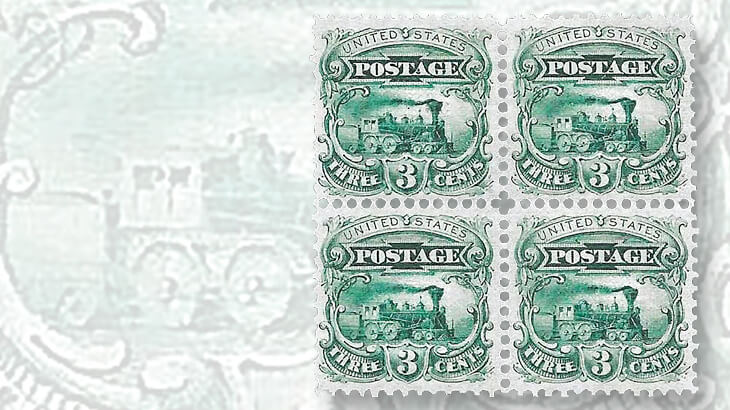 The National Bank Note Company essays for the 1869 Pictorial issue are very similar to the issued stamps except that the numerals are of a smaller size. Shown is a block of four of the green 3¢ 1869 small numeral plate essay. 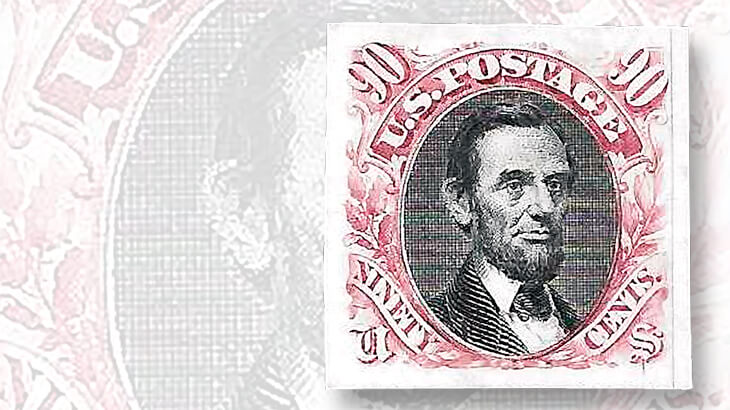 This cardboard plate proof of the 90¢ 1869 Pictorial (Scott 122P4) is much less expensive than the issued stamp.
Previous
Next

We all would like to grace our album pages with stamps that are perfectly centered and have full perforations, superb brilliant color, and pristine never-hinged original gum.

For most of us, however, stamps of this caliber are beyond our reach. As an example, a United States 1869 90¢ Pictorial stamp (Scott 122) that meets the above criteria would run in excess of $25,000 in the marketplace today.

By contrast, a cardboard plate proof of that same stamp (Scott 122P4), perfectly centered and possessing a sharp impression and brilliant color, could be added to your collection for no more than $200.

In fact, you could acquire an entire set of 19th-century cardboard plate proofs — which includes all of the regular issues (from the 1847 issue through the Columbians), special delivery, postage dues, Officials, and newspapers — for less than $10,000.

In the past several years, I have provided sets of cardboard or India paper plate proofs and high value singles to collectors who have wanted to fill those holes in their albums with something other than an affordable damaged set or faulty high value stamp. It is like the difference between night and day.

There are other options as well. Consider taking a specialized approach and focusing on a single issue.

They come as examples of three different patents that were awarded for the prevention and reuse of postage stamps. All three are named for the patentees: James MacDonough, Henry Lowenberg, and William Wyckoff.

The National Bank Note Company ran trial experiments on all three patents. They come in a range of colors and are available as imperforate and perforated singles, blocks of four, top and side imprint blocks, and bottom plate-number blocks of 12.

At $40 per single (damaged examples, which are great for experimentation, are priced considerably less), they are cheap enough that one can experiment with them with a Q-tip and water to test the effectiveness of each patent. You can watch the image dissolve before your very eyes.

There is enough material about these patents, available to collectors, that one could construct an interesting and informative 16-page single-frame exhibit.

For specific information on the three patents, refer to my column in the Nov. 24, 2014, Linn’s titled, “National Bank Note’s proofs testing patents to prevent reuse.”

The Scott Specialized Catalogue of United States Stamps and Covers has an extensive section on essays. As you thumb through the pages, you will encounter many different and unusual essays for U.S. postage stamps.

Some will represent design differences for the issued stamps, and some will have been the bases of experiments in either prevention of reuse or emerging printing techniques at the time they were produced. Many of them sell for less than $100, or even $50 or $25.

As an example, the National Bank Note Company produced for the U.S. Post Office Department a series of new essay designs for the 1869 Pictorial issue. The essays are very similar to the issued stamps except that the numerals are of a smaller size.

Each denomination comes in a wide range of colors and could make an interesting page placed just before the 1869 issue page in the Scott National Album.

Keep in mind that these essays rarely are found well-centered, but you should be able to find colorful examples for less than $75 each.

During the past 25-plus years, I have witnessed a resurgence in the collecting of essays and proofs. The uptick started with the inclusion of both categories in the 1992 edition of the Scott U.S. Specialized catalog.

Prior to that, in-depth information was limited to back issues of the Essay-Proof Journal published by the now defunct Essay and Proof Society, and the 1941 edition of Essays for U.S. Adhesive Postage Stamps by Clarence Brazer.

With the advent of the Internet, collectors have access to repositories of government information with the click of a mouse. The U.S. Philatelic Classics Society’s specialized quarterly journal, The Chronicle of the U.S. Classic Postal Issues, has a regular section on essays and proofs.

If you have the desire to collect something outside the box that does not need to cost you an arm and a leg, consider U.S. essays and proofs. A new world awaits you.

James E. Lee has been a full-time professional philatelist for more than 25 years, specializing in United States essays and proofs, postal history and fancy cancels. He may be reached via email at: jim@jameslee.com or through his website: www.JamesLee.com.

A look back at the W. Curtis Livingston collection: Essays and Proofs