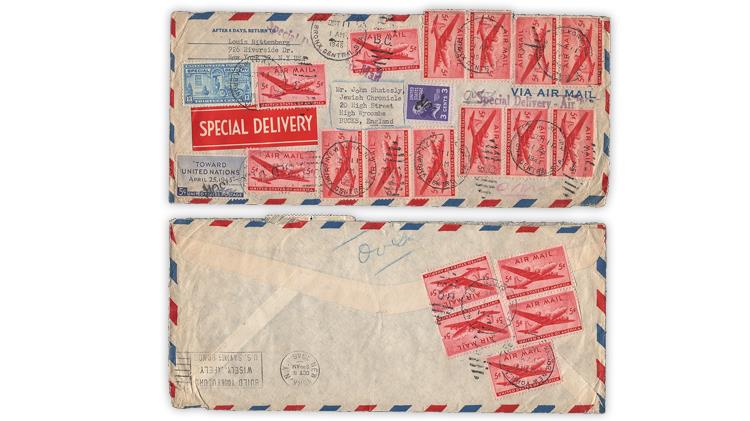 Figure 1. Some might call this cover gaudy, but John Hotchner thinks it is beautiful with 13 examples of the large 5¢ DC-4 Skymaster airmail stamp of 1946 paying three times the airmail rate of 30¢ per ½ ounce to England. 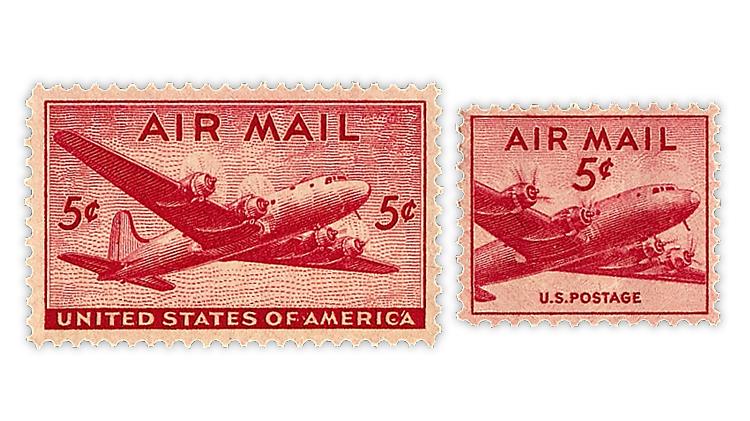 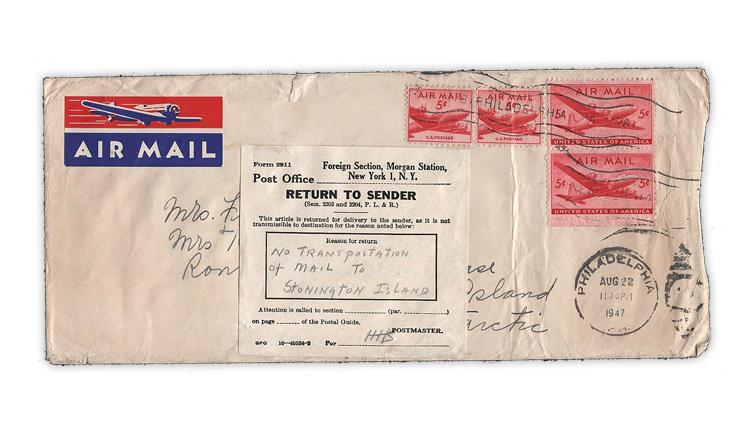 Figure 3. Although it could not get to the addressees because of winter in Antarctica, this 1947 cover franked with two examples each of the large and small 5¢ DC-4 Skymaster stamps has the most unusual address and a massive story behind it.
Previous
Next

Some stamps just jump out at you. Maybe you can explain why. Maybe not. Maybe it was a single philatelic item that you’ve seen that caught your interest.

Certainly as a child of the 1940s, I was struck square in the face by the cover shown in Figure 1. What is not to like about 13 examples of Scott C32, the large 5¢ DC-4 Skymaster airmail, on the front of a special delivery cover from New York to England? As a bonus, there are five more examples of that 5¢ airmail stamp on the back of the cover.

The total postage is $1.11, making this a triple-weight cover (six times the 15¢ airmail rate to England), plus 20¢ for the special delivery charge and an overpayment of 1¢.

Almost a billion of the small version were produced before the end of the 5¢ rate period. By comparison, not quite 865 million of the large DC-4 Skymaster airmail were issued.

The large DC-4 Skymaster stamps continued to be sold until the supply was exhausted, but good usages are not easy to find. Most covers seen at dealer booths are domestic first-flights or other philatelic usages.

While I collect interesting domestic uses of this stamp as well, complex international usages are much more desirable and always attract my attention. I thought I would share a few additional examples.

What could be a more unusual destination than Stonington Island in the Antarctic? It was the base of operations of the Ronne Antarctic Research Expedition of 1947-48. The expedition arrived in March 1947.

A cover sent from Philadelphia in August 1947 with two each of the large and small DC-4 Skymaster stamps is shown in Figure 3. It is addressed to Mrs. Finn Ronne and Mrs. Harry Darlington at Stonington Island.

The principal goal of the expedition was to discover whether Antarctica was a single continent or whether there was an opening between the Weddell Sea and the Ross Sea. During the expedition, Finn Ronne directed the exploration of 250,000 square miles of uncharted land, and the expedition took more than 14,000 aerial photos.

During its 12 months, the expedition mapped the last unknown coastline in the world along the Weddell Sea and discovered, named and claimed for the United States many new geographical features.

In February 1948, as warmer weather returned to Antarctica and the sea ice began to melt, the expedition drew to a close and with the help of a U.S. Navy icebreaker sailed northward for home. It was the last privately financed U.S. Antarctic expedition, though it did benefit from U.S. Navy and U.S. Air Force assistance.

To read the rest of this column about the large 5¢ DC-4 Skymaster airmail stamp, subscribe to Linn’s Stamp News.