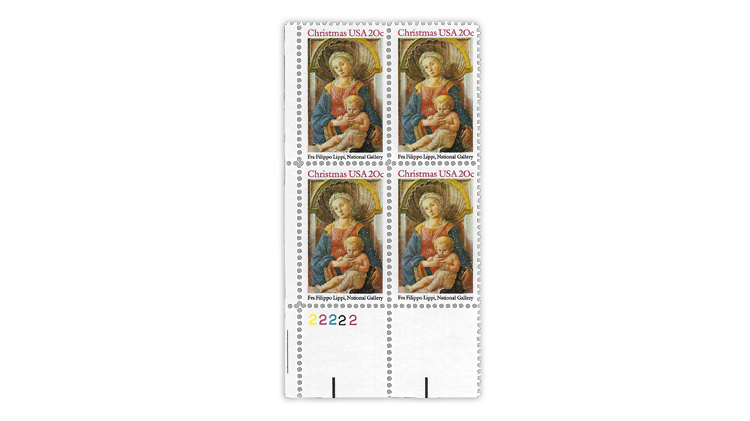 Nearly 35 years after the United States 20¢ Madonna and Child stamp was issued, a Virginia collector discovered a tagging error on this plate block from his collection.

Collectors often page through their albums to examine the stamps they’ve collected, and sometimes they notice something they hadn’t seen before.

That’s what happened to a stamp collector in Virginia who was checking the luminescent tagging on United States stamps in his collection when he spotted something unusual.

“I came across a Scott 2107, the 1984 [Madonna and Child] Christmas block that looked a bit odd,” the collector, who asked to be identified as Robert W., told Linn’s Stamp News recently.

Intrigued by an article he read about tagging varieties “hiding in plain sight,” Robert had purchased an ultraviolet lamp to check the tagging on his stamps.

“I am a plate block collector and became very interested in seeing my stamps from a different perspective,” he said.

When he placed the Christmas plate block under the UV light, he saw only a very slight glow of taggant on the upper edge of the top two stamps in the block, and no glow at all on the bottom two stamps.

The plate number 22222 appears on the margin paper attached to the block.

He checked another Madonna and Child plate block in his collection and found that it had the normal full block tagging on all four stamps.

And that expert opinion will result in a new listing in the Scott Specialized Catalogue of United States Stamps and Covers.

Scott catalog editor Charles Snee confirmed to Linn’s that the tagging-omitted error will be listed in the 2020 edition of the Scott U.S. Specialized catalog when it is published later this year.

Asked what he could recall about where he bought the error block, Robert was quite specific.

“I obtained the bottom plate strip of 20 when I was a U.S. Army major stationed at Fort Gordon in Augusta, Ga.,” he replied.

“I purchased them from the U.S. post office in Martinez, Ga., in November of 1984. Martinez is a suburb of the Greater Augusta area.

“I wish I had purchased the UV light back then,” Robert added. “I pulled the plate block off and set it aside. I have been collecting plate blocks of stamps since 1970.

“The other 16 stamps were used to send Christmas cards to family and friends, so the other eight potential tagging-omitted specimens are who knows where? But after 35 years, I doubt they are still around.”

The tagging compound, which is mostly invisible to the naked eye, is similar to an added color on printed stamps. The chemical taggant is detected by mail-sorting machinery that uses it to properly face the envelope and apply a postmark on the tagged stamp.

The 20¢ Madonna and Child Christmas stamp was printed in sheets of 200 (trimmed to panes of 50) on the Andreotti gravure press at the U.S. Bureau of Engraving and Printing.