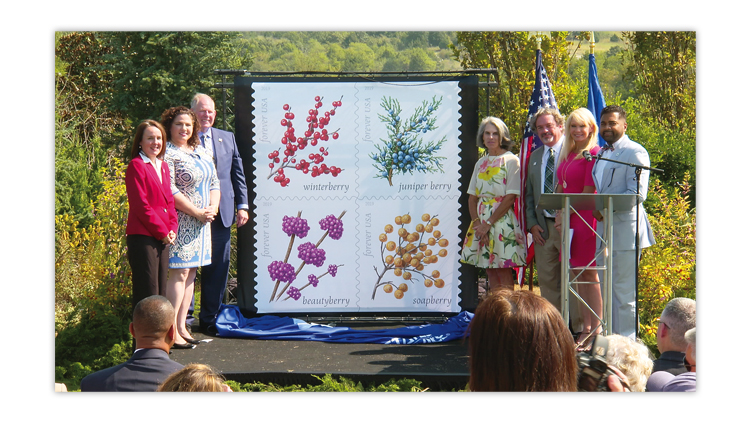 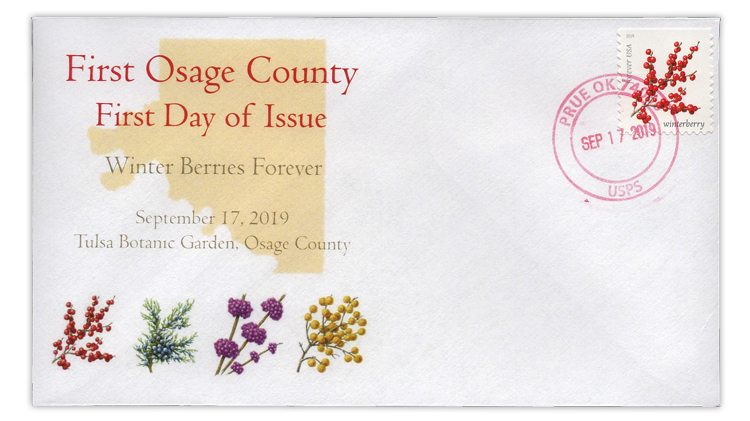 Starting with the servicing of first-day covers for the United States 14¢ American Indian stamp of 1923 (Scott 565) in Muskogee, Okla., the state of Oklahoma has had its fair share of first-day events.

These celebrations tended to be for stamps depicting famous local citizens such as Will Rogers (Scott 975, 1801) or Jim Thorpe (2089, 3183g), or for other topics and historical events related to the Sooner State.

On Sept. 17, the latest Oklahoma first-day ceremony was held at the Tulsa Botanic Garden for the four nondenominated (55¢) Winter Berries forever stamps that were issued in a double-sided pane of 20. The four stamps depict the winterberry, juniper berry, beautyberry and soapberry.

At first the Winter Berries first-day ceremony, scheduled for 11 a.m. on a weekday, caused little interest for this devout Oklahoma postal historian.

I thought it was nice that the U.S. Postal Service honored my state again, but it was not something for me to take time off from work to attend.

My main collecting interest is the postal history of the Osage Indian Reservation in what is now Osage County, Okla.

Looking at a map, I realized the Tulsa Botanic Garden is only located near Tulsa, in a very rural, unincorporated area to the northwest in Osage County. That was a game changer for me.

I went from having little interest to becoming ecstatic. Immediately I began to design a first-day cover cachet, and I requested to take the whole day off from work.

The ceremony was well put together. There was the presentation of the colors, a nice rendition of the national anthem and several speakers. A local television personality served as the master of ceremonies.

The ceremony took place outdoors in the full sun on a 92-degree Oklahoma day. Winter was the last thing on anyone’s mind.

As soon as the ceremony concluded, my wife and I made a beeline to the USPS sales area. There I purchased the first four Winter Berries panes that were sold.

What better way to commemorate the four Winter Berries stamp designs than to have each stamp postmarked at a different Osage County post office?

As the tires of our car spit gravel and dust, we were the first people to tear out of the botanic garden. We were on a mission.

While my wife drove, I franked covers as we made our way to the Osage County post office closest to the event, in the tiny town of Prue.

After Prue we moved on to Hominy. In the county seat of Pawhuska, we stopped for lunch before servicing another round of covers. The last stop was at the Barnsdall post office.

As we headed home with piles of covers in the trunk, spread out so the cancel ink could dry, my wife commented that our grand Osage County adventure was a lot of fun. Yes, it really was.

Maybe I am a first-day cover collector after all.