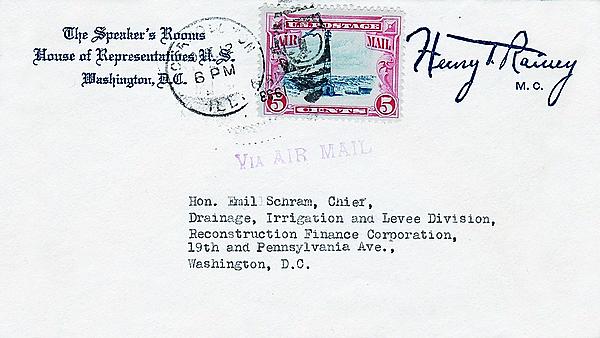 Officially, as of Aug. 29, 1930, airmail letter-rate postage was required on free-franked mail of a House of Representatives member sent via airmail. The 5¢ franking by the airmail stamp on this 1933 letter was incorrect by 3¢, as the airmail 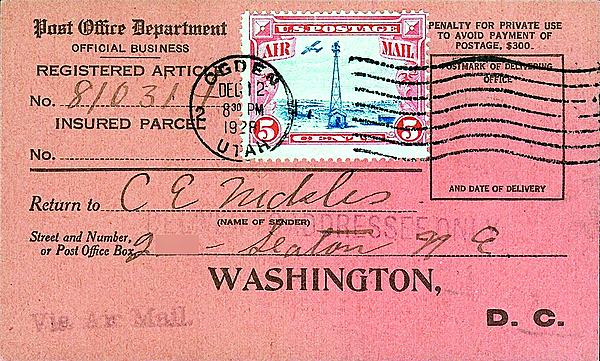 This is a Dec. 12, 1928, return receipt Form 3811 franked with the 5¢ Beacon airmail stamp and handstamped “Via Air Mail.” It represents the airmail return of such a receipt before such returns were officially allowed in 1938.

During that time, he has discovered some atypical usages of this stamp.

One example is the registered return receipt Form 3811 pictured here that is franked with the 5¢ Beacon airmail stamp.

This franking represents the 5¢ letter-rate franking required at the time for airmail service on postcards, until Jan. 1, 1949.

The return receipt for registered mail (on Form 3811) first required payment of a fee (3¢) on April 15, 1925. The first time that the airmail return of such a receipt was mentioned officially was in Postal Bulletin 17482 of July 15, 1938. That announcement stated, in part:

“It has been reported that instances have arisen where senders requested that return receipts for registered mail be transmitted to them by air mail. There is no objection to such a procedure being followed providing the sender pays the 3-cent fee required for the return receipt and 6 cents for the return of the receipt by air mail. In such cases, a 6-cent air mail stamp should be affixed above the name and address of the sender on the Form 3811, which should be indorsed ‘Return by air mail.’”

It’s interesting to note the use of the phrase air mail instead of the modern use of airmail. The latter term was first seen in the 1950s.

This announcement indicated that the airmail letter postage of the time, 6¢ in this case, was due for this service, in addition to the return receipt fee.

How can Kobersteen’s 1928 example be explained in light of the fact that the first official announcement allowing airmail return of the registered return receipt wasn’t published until 1938?

One has to assume that a 1928 postal patron requested such service, and his clerk mistakenly allowed it.

Another interesting use of the 5¢ Beacon stamp is found on free-franked mail sent Oct. 12, 1933, as an airmail letter by a member of the House of Representatives.

Postal Bulletin 15386 (Aug. 29, 1930) announced (really confirmed) that airmail postage was to be placed on Official matter. The only exception to this was important Official matter of the Post Office Department, as announced in the 1932 Postal Laws and Regulations.

This free-franked letter was mailed when the airmail letter rate was 8¢ for up to 1 ounce. This example, therefore, was shortpaid 3¢.

The information needed to evaluate these two interesting covers franked with the 5¢ Beacon airmail stamp was found in the third edition of my book U.S. Domestic Postal Rates, 1872-2011.

Tony Wawrukiewicz and Henry Beecher are the co-authors of two useful books on U.S. domestic and international postage rates since 1872.

The third edition of the domestic book is now available from the American Philatelic Society, while the international book may be ordered from the website www.spiritone.com/~tonywaw.