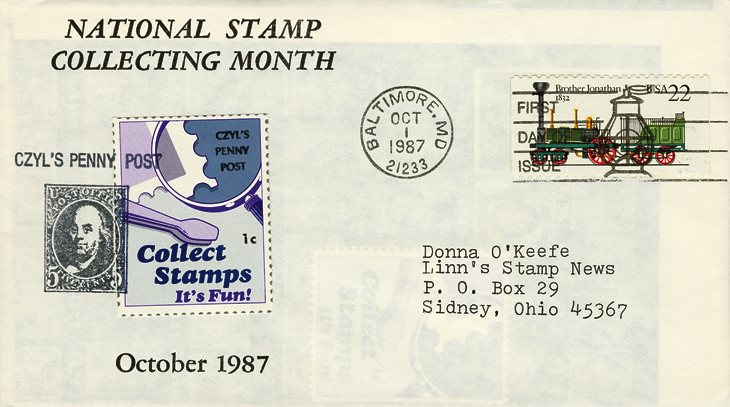 Sending covers to a central location to obtain a first-day cancellation is nothing new. Almost 30 years ago, this FDC went to the First Day Cover Unit of the Philatelic Division for canceling.

Last week, I encouraged readers to use the Disqus tool to comment on stories posted to our website.

In his First-Day Covers column posted Sept. 16, de Vries reported that the United States Postal Service was transitioning to having FDCs sent directly to its Cancellation Services division in Kansas City.

“For years, registered dealer-servicers submitting 50 or more FDCs could send them directly to Cancellation Services, which is part of Stamp Fulfillment Services. Everyone else had to send their covers to the first-day city.

“However, the first-day-city post offices were not supposed to service the FDCs; instead, they were to bundle up the orders and forward them to Cancellation Services for processing.”

De Vries expressed his pleasure with the new policy, stating that SFS Cancellation Services was more experienced with canceling FDCs and used a special fast-drying ink to prevent smears.

BwanaBob disagrees and expressed his displeasure with first-day cancellation policies:

“I haven’t bothered with a First Day Cover in nearly 20 years. The last time was at one of the Mega Events in NYC.

“I didn’t mind standing in line to get my covers serviced in the actual first day city. Though it’s been debated numerous times, I still cannot fathom why anyone would want to own a First Day cover that was not cancelled in the city found on the cancellation; the ‘true’ first day city.

“It is meaningless to me to have a cover cancelled in a service center in another part of the country. Now the USPS could get around this by declaring every stamp’s first day city to be Kansas City. Wouldn’t that be special.”

We can understand both positions. While we as collectors can appreciate a nicely struck first-day cancel, FDCs lose much of their charm when they aren’t canceled in the city where the stamp is issued. Two examples are reported on page 16: the $23.75 Gateway Arch stamp and the $6.65 Liliuokalani Gardens stamp, both of which are being issued Jan. 22 in Kansas City, Mo.

We also appreciate that the Postal Service saves money by designating Washington, D.C., as the first-day location for many of the new stamps issued in recent years, but again, FDC collecting loses some of its appeal. Most collectors find it more desirable to have a first-day city that has a significant tie-in with the stamp subject.

What do you think? If you have an opinion on this topic or others, please weigh in using the Disqus comment section below, or reach out to us on Facebook or Twitter.