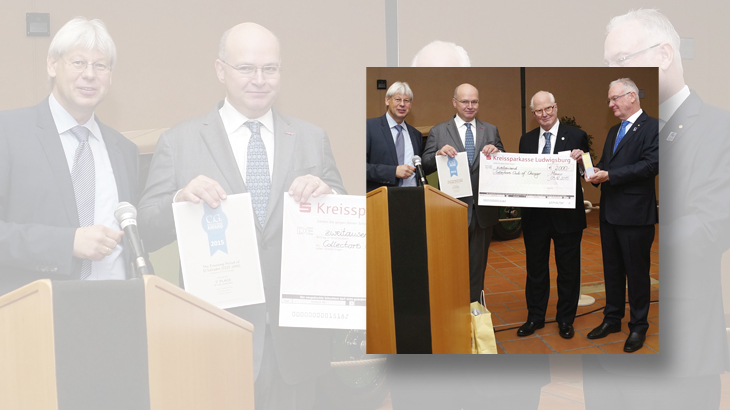 The Collectors Club of Chicago took home the top prize in the 2015 CG award ceremony held Dec. 3 during the Monacophil 2015 stamp show and exhibition in Monte Carlo.

The CG international philatelic promotion award, sponsored by German auctioneer Christoph Gaertner, encourages philatelic studies and the preservation of philatelic knowledge via published articles, according to Gaertner, including printed word and digital media as it relates to the promotion of youth philately.

Each year the award is given to the best submission by a study group, society, club, association or publisher of a philatelic magazine or newsletter.

The prize to the Collectors Club of Chicago was accepted by Leonard Hartmann, a member of the club’s board of directors and the head of its publications committee. The first place prize includes a €2,000 award.

The Collectors Club of Chicago was incorporated in 1928 and has as its primary objective the documentation, preservation, advancement and promotion of philately through education, study research, and services, according to the club website. Membership is by invitation only.

Second place, with a €1,000 award, was awarded to the Bund Deutscher Philatelisten of Germany. Third place (€800 award) was claimed by the American Association of Philatelic Exhibitors.

The special prize for digital contribution was awarded to the American Philatelic Research Library, and the special youth prize went to Germany’s Junge Briefmarkenfreunde Simeon-Hamm.

Gaertner notes that the judging panel’s deliberations are independent, and that the Christoph Gaertner auction firm is not involved in the assessment process.

The CG award was first given in 2013, making this the third annual ceremony.

With this year’s event completed, Gaertner invites applications for the 2016 CG award.