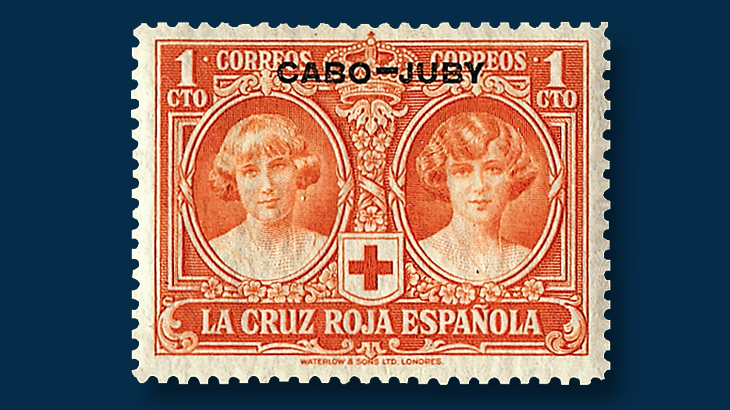 Nineteenth and early 20th century colonial stamps are popular with classic collectors as well as those who collect by empire, region or country. The colorful and often exotic British Empire and French Empire colonial issues spring immediately to mind, but don’t forget about the Spanish colonial issues.

Cape Juby is a sparsely populated strip of territory along the northwest Atlantic coast of Africa, east of the Canary Islands. It formed a sort of no- man’s-land between French Morocco and Spanish Sahara until 1916, when it was occupied by Spain after negotiations with France.

It was administered along with the Spanish Moroccan enclave of Ifni as part of Spanish Sahara, although separate stamps were issued for all three possessions. With a population of less than 10,000, most of whom were illiterate nomads, there probably wasn’t a great demand for postage. The Kingdom of Morocco became independent in 1956. After a brief tussle, Spain ceded Cape Juby to Morocco in 1958.

In 1926, Spain issued an attractive set of Red Cross semipostal stamps depicting members of the royal family (Scott B1-B13). The set was overprinted “Cabo-Juby” (Scott B1-B13) for use in the colony.

You might have to buy the stamps one or two at a time to assemble a set. Interestingly enough the low-denomination 1-centimo and 2c stamps are the priciest in the set.