What collectors can expect at WSS-NY 2016 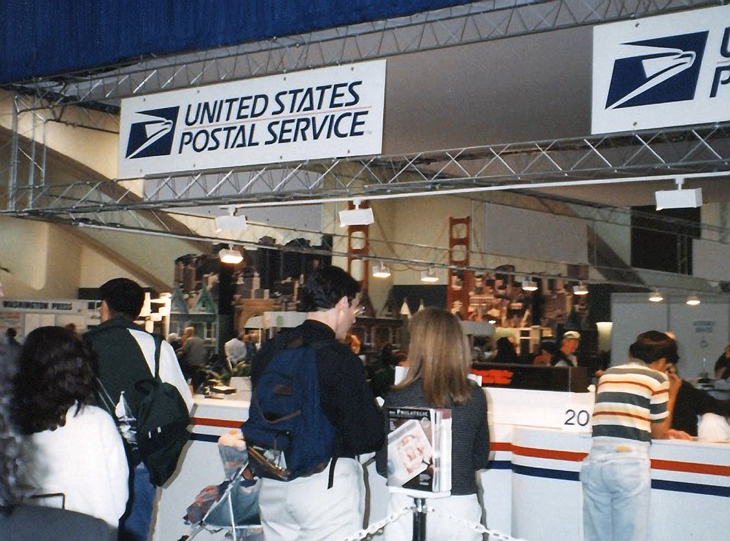 Well-stocked U.S. Postal Service booths are a fixture at U.S. international shows, such as this postal counter at Pacific 97. 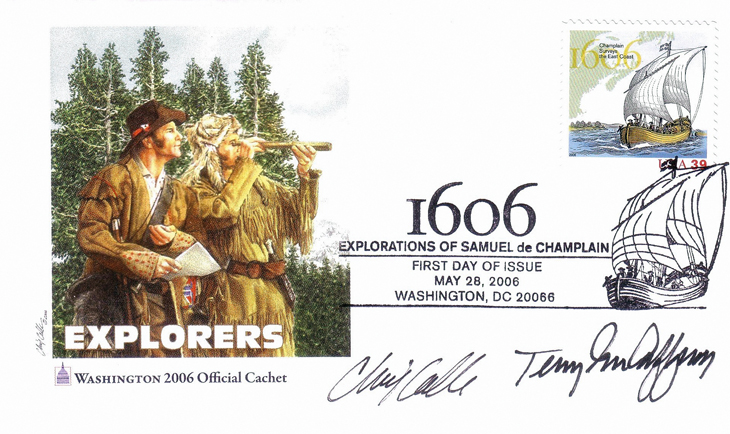 Another of the author’s treasured show souvenirs is this Washington 2006 official cacheted cover franked with the new Samuel de Champlain stamp (joint issue with Canada) and signed by the stamp designers. 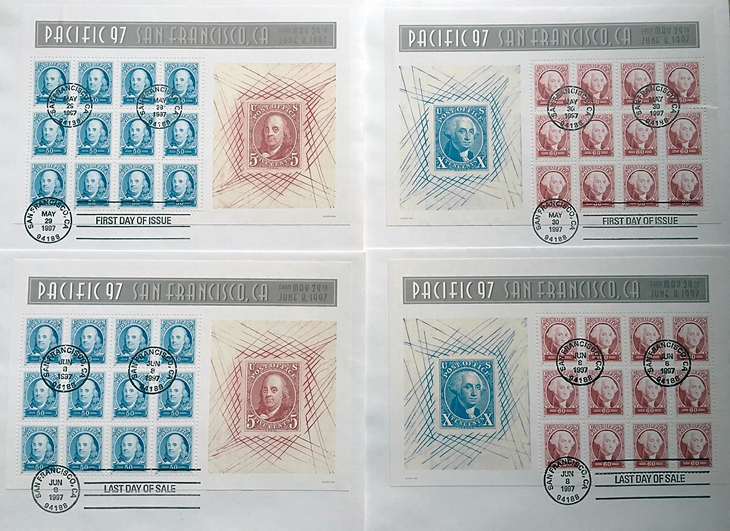 This special souvenir of Pacific 97 has first- and last-day cancels of the U.S. stamps issued in honor of the show. 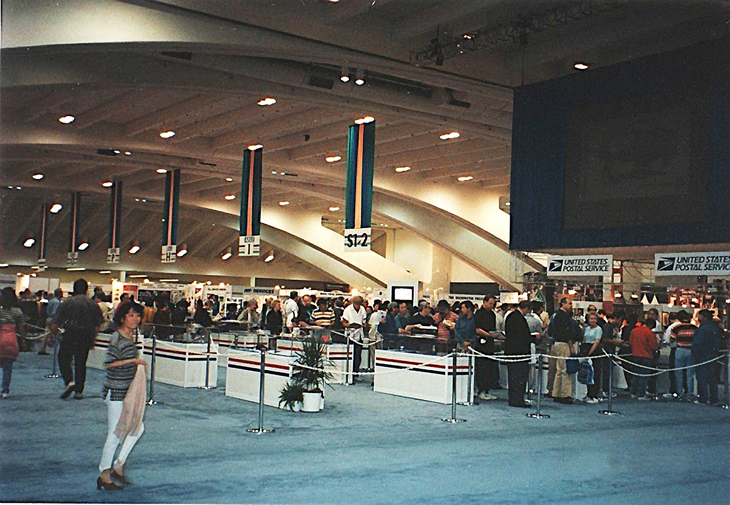 A scene from the Pacific 97 World Philatelic Exhibition in San Francisco shows the lines of customers at the United States Postal Service booth. 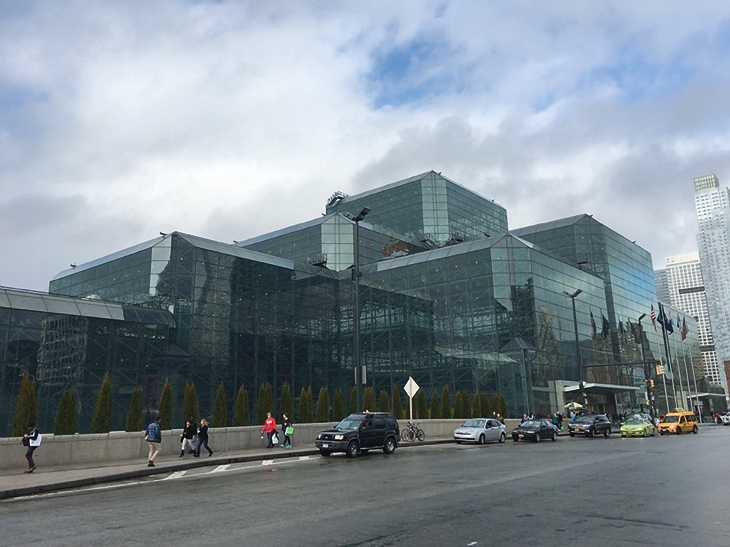 A view of the Jacob K. Javits Convention Center from 11th Avenue, where most show attendees will enter. 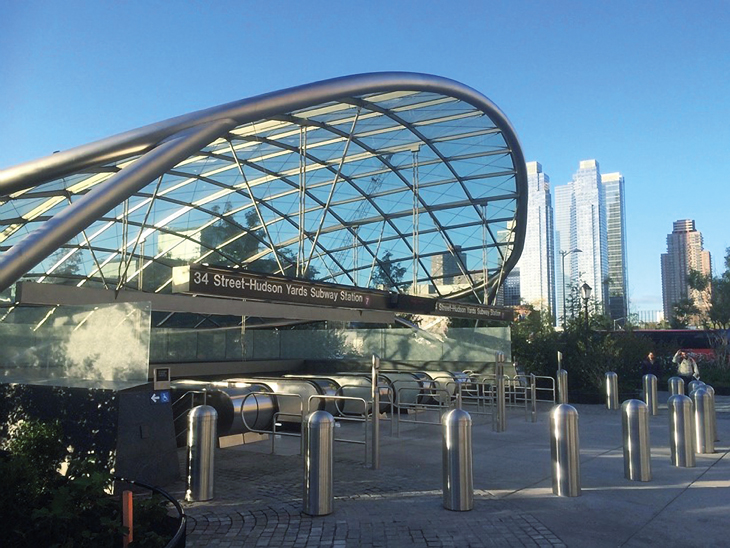 The Javits Center is now more easily accessible by public transportation, thanks to the new Hudson Yards subway station, only a block away at 34th Street. 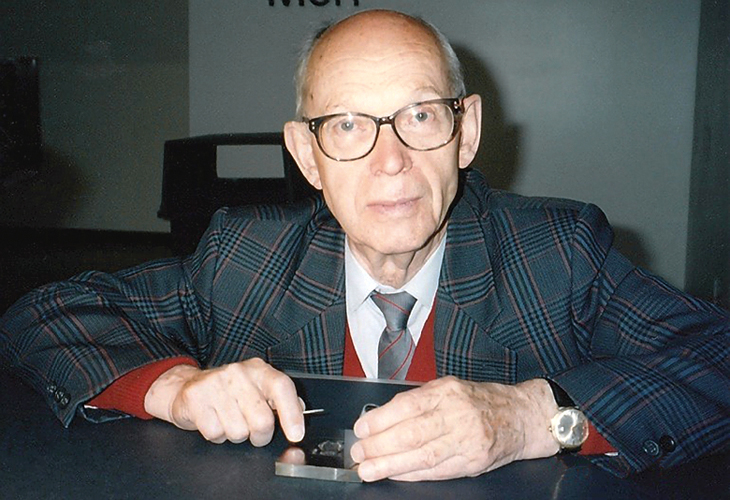 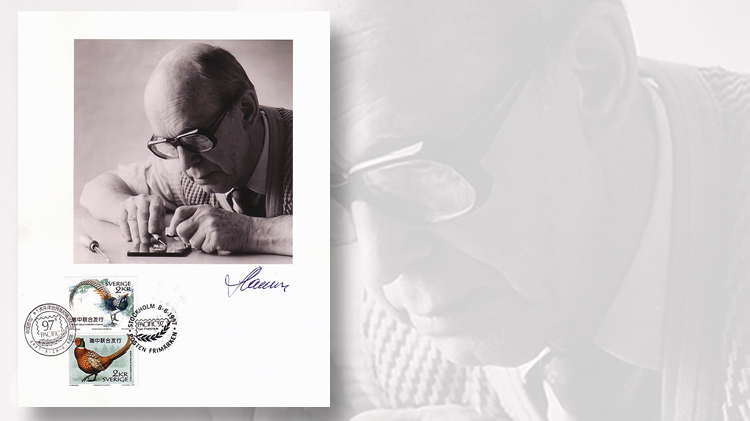 International shows offer chances for unique souvenirs, such as this signed photograph of engraver Czeslaw Slania from Pacific 97, with a postmarked example of one of his stamps.
Previous
Next

In common with many other collectors, I am very excited that this once-in-a-decade United States event is happening this year, but also that it is in my hometown of New York City.

World Stamp Show-NY 2016 will be held at the Jacob K. Javits Convention Center, located on 11th Avenue between 34th and 40th streets, in the Clinton neighborhood near the new Hudson Yards development. The Javits Center covers six city blocks and includes multiple huge exhibition spaces with very tall ceilings supported by space-framing trusses. Each year the facility hosts dozens of widely varied exhibitions and trade shows and other events.

The original building was designed by the world-famous architectural firm Pei Cobb Freed & Partners, and a five-year, $460-million renovation and expansion was recently completed. My personal memories of the Javits Center begin with attending several “Mega-Event” stamp shows sponsored by the American Stamp Dealers Association during the 1990s and early 2000s, before the semi-annual events moved to other venues.

In the past, the Javits Center was not so easy to get to by public transportation. The closest subway stations were Times Square and 34th Street. However, with the new development at Hudson Yards and the recent opening of the Hudson Yards Station for the seven-train extension, the Javits Center is only a block away from a new subway station and now very accessible by both subway and bus.

Some of my most memorable show recollections involve meeting stamp designers at new-issue ceremonies or postal administration booths. At Pacific 97, I was honored to meet the world-renowned stamp engraver Czeslaw Slania, at the Swedish postal service’s booth. The engraver was actually working at the show on the engraving of a Swedish stamp (Scott 2265a, issued Jan. 15, 1998) for the new Museum of Modern Art in Stockholm. With the translation help of one of the Swedish postal representatives, I asked for a photo of me with Slania, and he was happy to comply. I expressed my admiration for his engraving work and said how honored I was to meet him.

To my surprise, the Sweden Post representative gave me a thematic stamp album titled Naturupplevelser (“nature experiences”) as a souvenir gift. It included mint examples of nature and wildlife stamps, three of which had been engraved by Slania. The postal representative then asked if I would like Slania to autograph the stamps for me, and I was thrilled. He turned to the corresponding pages and had the engraver sign next to each of his stamps. (Most of his stamps have “CZ.SLANIA” in the lower-right corner, making identification easy.)

Slania passed away in 2005, and his astounding body of work (more than 1,000 stamps) continues to attract collectors, with specialist clubs and literature, including a catalog. Meeting him was truly an unforgettable experience.

It was very enjoyable to visit the multitude of booths on the show floor representing postal administrations from around the world. Besides being able to buy other nations’ new issues in person, in U.S. dollars, and produce my own special souvenirs, talking to each country’s postal spokespeople was especially rewarding.

I remember speaking to the Hong Kong postal representative at the Pacific 97 show about the phenomenon of philatelists eagerly acquiring stamps of Hong Kong, then still under British rule, just before the “handover to China” on July 1, 1997. Many people were in line to buy stamps depicting Queen Elizabeth II on Hong Kong issues.

Nine years later, when I attended Washington 2006 in the nation’s capital, many of my highly anticipated wishes were fulfilled. Growing older and developing an appreciation for rare stamps, I attended the show with a game plan to seek out and relish the world-class philatelic material on view. I brought six friends with me, most of them living in the D.C. area at the time, and none of them collected stamps. The show was eye-opening for my friends, and they purchased some souvenirs for themselves.

In common with other international shows and with the Big Apple, WSS-NY 2016 will offer something special for everyone, and that includes young and old, beginners and longtime collectors, or even those who have never thought of stamps as sources of enjoyment.

Admittedly, attending a stamp show on this scale may be overwhelming for first-timers (or even for those who have been at other internationals), so allow me to share some tips and suggestions from my own experience. Making a plan for your visit will help you to better enjoy the U.S. philatelic event of the decade:

1. Go on the World Stamp Show-NY 2016 website, which has all the vital data, constantly updated, about the show: hours, lists of events and exhibits, dealers and postal administrations who will be there, and so on. The site even has discounts for booking air travel and hotel reservations; it’s the best and most reliable resource about the show.

2. Admission is free throughout all eight days of the show, so bring your loved ones, family members and friends so they can have fun, or just watch your bags (and your kids) while you run around the show. Many of the recommended activities also are free of charge, or will cost just the price of a stamp (to make a souvenir with a show postmark).

3. Make a point of attending as many first-day stamp ceremonies as you can. The U.S. Postal Service will be issuing two World Stamp Show-2016 forever stamps on the first day of the show, and the United Nations and other postal administrations also will hold first-day ceremonies during the course of the show. These ceremonies offer a unique opportunity to meet stamp designers, obtain autographs and create one-of-a-kind philatelic souvenirs.

4. Mail a postcard or cover at the show to yourself and your friends. Special pictorial show cancels will be available, with mailboxes set up to receive your items. Put your correctly stamped cards or covers in the mailbox for the date whose cancel you want, and they will be canceled and mailed accordingly. An example of the pictorial postmark will be displayed at the mailbox.

5. View the thousands of frames of world-class exhibits in competition for awards at the show, and the display of unparalleled philatelic rarities of the world in the court of honor. If you are considering putting together your collection for an exhibition, or you simply want to see exhibits of the highest level, this will be a great learning experience, and deeply rewarding for your collecting knowledge. Certainly, one of the must-see exhibits is the world’s most famous stamp, the British Guiana 1856 1¢ Magenta, whose auction price of almost $9.5 million set a world record in 2014.

6. Attend seminars, stamp auctions, and stamp-society meetings of your interest. Dozens of collector groups will be attending the show, with information booths and events. All are listed on the WSS-NY website.

7. You will be able to literally shop around the world and easily obtain recent stamp issues from countries represented on the show floor. You can expect to purchase most of the items at face value converted or equivalent to post office prices in U.S. dollars. This is one of my favorite activities when attending international stamp shows.

8. Creating a philatelic passport is another fun activity at international stamp shows. A show passport booklet will be offered by the WSS-NY 2016 show committee and Linn’s Stamp News. Affix mint stamps on the appropriate pages (all the attending postal administrations should be featured) and then acquire a special show postmark at each country’s booth. The official show website lists all the postal agencies scheduled to be present.

9. Endless hours of fun can be had by visiting the hundreds of dealer booths to build your own collections. Consult the WSS-NY 2016 website for the list of participating dealers, and be sure to bring your want list with you to the show.

Above all, make the most of your enjoyment of World Stamp Show-NY 2016. There will not be a similar U.S. event until the international show in Boston in 2026.