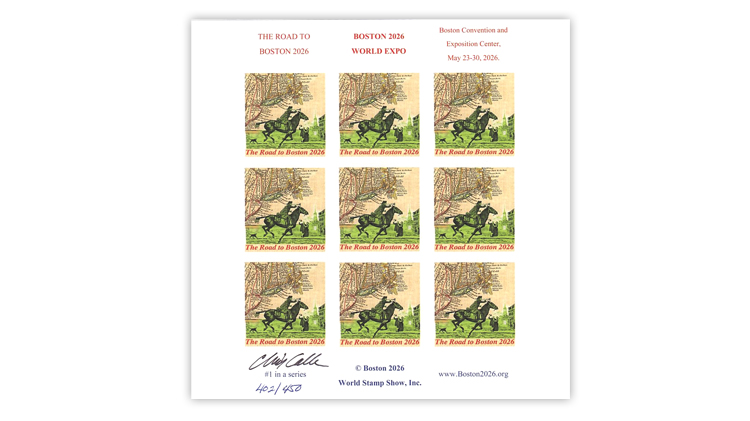 A time-honored tradition for international stamp shows in the United States is the offering of cinderella labels used to promote the show.

Boston 2026 World Expo will take place May 23-30, 2026, at the Boston Convention and Exhibition Center in Boston, Mass. Additional details about the show can be found on its website.

The rouletted Boston 2026 labels feature a design by veteran stamp designer Chris Calle of a Colonial postrider. They were unveiled in August 2021.

Show organizers indicate that four additional label designs are planned, one each year through 2026, and all will be related to the 250th anniversary of the founding of the United States.

In December 2021, the show released a numbered edition of sheets of the labels with 450 of them signed by Calle. Each sheet includes nine labels.

The unsigned sheets are free, but the shipping and handling fee is $5 for addresses in the United States and $10 for international.

The signed sheets are $10 plus shipping and are limited to one per customer.

The unsigned sheets are also being distributed at upcoming stamp shows, including Philatelic Show in Boxborough, Mass. (April 29-May 1), and Capex 22 in Toronto, Ontario, Canada (June 9-12).