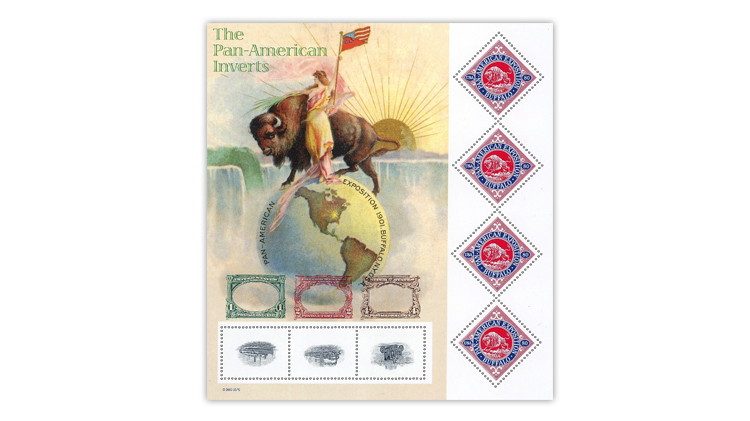 Three distinct errors were created on this single pane of the 2001 Pan-American Exposition Centennial stamps. A shift of the color intaglio printing resulted in three stamps being produced as color-missing errors. The stamp pane was examined by the Americ

A remarkable new United States triple-stamp error has surfaced 18 years after the stamps were issued.

A pane of the seven-stamp 2001 Pan-American Exposition Centennial stamps (Scott 3505) has been authenticated with the intaglio frames of the 1¢, 2¢ and 4¢ stamps printed in the pane selvage above the perforated stamps, instead of enclosing the black vignette within the perforations as they should be.

This is the first reported error on the commemorative issue.

On the normal 2001 pane, those three stamps pay tribute to the three Pan-American invert stamps of 1901 (Scott 294a, 295a and 296a), by reproducing the designs with the centers intentionally inverted.

The original 1¢ and 2¢ inverts were errors printed with the black vignettes upside down (a ship on the 1¢ stamp and a train on the 2¢ stamp). The errors were discovered after the set of six Pan-American stamps went on sale May 1, 1901.

The original 4¢ inverts — with an upside-down electric car — were created by the Bureau of Engraving and Printing for the U.S. Post Office Department in the aftermath of the 1901 error discovery.

The color misregistration on the authenticated pane has created three distinct color-missing errors, leaving the three intentionally inverted black vignettes as the only elements printed on the individual stamps.

The examiner attributed the error to an upward shift of the color intaglio sleeve.

On the right side of the intact pane are four square perforated 80¢ stamps in red and blue that mimic promotional labels issued for the original 1901 exhibition. Those four offset-printed stamps on the error pane are normal, unaffected by the intaglio printing shift.

The issue was printed by Banknote Corporation of America, a contractor for the U.S. Postal Service.

The new error pane was discovered this year by a collector in the Northeast who preferred not to be named for this story.

He bought 10 panes of the stamps when they were issued in 2001, but never spotted the error pane until he went through his accumulation a couple of months ago after deciding to use some of his extras for postage.

After he found the unusual variety, he mailed the stamps to APEX and called the Scott catalog editors to let them know of his discovery.

The finder was pleased to learn his pane is the first of its kind reported on the Pan-American Exposition Centennial issue.

"What’s interesting is that it’s an error of an error," he told Linn’s with a laugh.

With the APEX confirmation, the Scott catalog editors will list the newly discovered errors in the 2020 Scott Specialized Catalogue of United States Stamps and Covers, which is scheduled for publication in October.