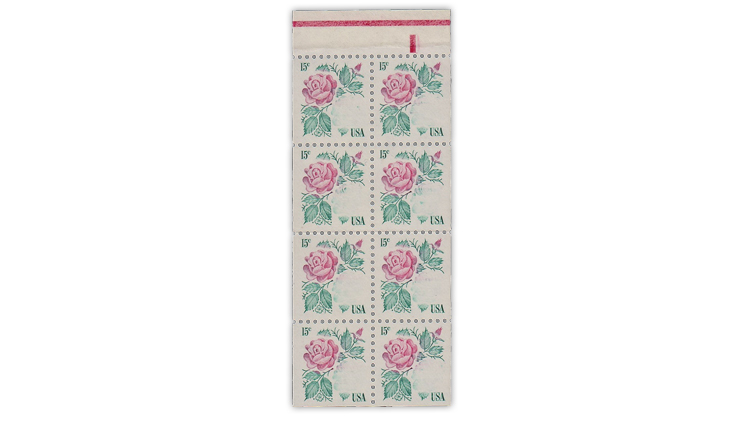 This intact booklet pane of eight United States 1978 15¢ Red Masterpiece and Medallion Roses stamps is completely missing the orange ink used to print the medallion rose at lower right on each stamp. A dealer in New York discovered the new error while sor

A new color-omitted error of the United States 1978 15¢ Red Masterpiece and Medallion Roses booklet stamp (Scott 1737) was recently discovered by a dealer in New York.

The error, as illustrated here, occurs in a complete booklet pane of eight (Scott 1737a) that is completely missing the orange of the medallion rose on all eight stamps. According to Gitner, the orange-omitted Roses error pane was found while examining postage lots.

Also found in the lots was a second Roses booklet pane (not shown) that was missing the orange on the top six stamps in the pane. The bottom two stamps show visible traces of the orange ink.

Gitner told Linn’s that both panes will be available for sale in the near future.

“I haven’t determined a price for each pane,” he said.

Jay Bigalke, editor-in-chief of the Scott catalogs, said that the new color-omitted error will be listed as Scott 1737f, “As ‘1737,’ orange omitted” and Scott 1737g, “As ‘1737a,’ orange omitted.” The former listing applies to a single stamp, the latter to a booklet pane of eight.

Both of these listings will appear for the first time in the 2022 edition of the Scott Specialized Catalogue of United States Stamps and Covers to be published in October.

Imperforate and tagging-omitted errors of Scott 1737 are already listed and valued in the Scott U.S. Specialized catalog.