Color variety of U.S. $1 O’Neill stamp is in demand 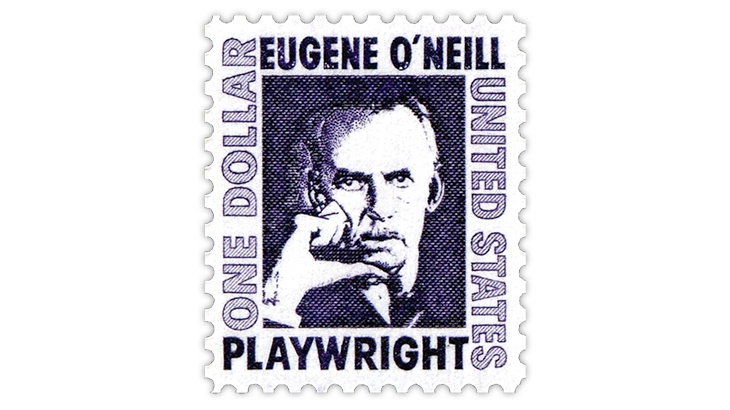 The United States black violet color variety of the $1 Eugene O’Neil stamp (Scott 1294b) is scarce and a good buy at or near Scott Specialized Catalogue of United States Stamps and Covers values in mint never-hinged condition, used condition and as a plat

On Oct. 16, 1967, The United States issued a $1 dull purple Eugene O’Neill stamp (Scott 1294) in the Prominent Americans series. The stamp honors the American playwright (1888-1953), who wrote such acclaimed plays as Anna Christie, The Emperor Jones, The Hairy Ape, Desire Under the Elms, Strange Interlude, The Iceman Cometh and a Long Day’s Journey into Night. He was also Charlie Chaplin’s father-in-law as his daughter Oona was Chaplin’s fourth and last wife.

The Scott Specialized Catalogue of United States Stamps and Covers lists and values a black violet color variety of this $1 stamp (Scott 1294b). The Philatelic Foundation has certified only one full pane of this variety and several plate number blocks, all of which are plate number 32902.

This color variety is surprisingly scarce, and all the catalog’s values except for mint-never hinged are in italics (to identify an item that can be difficult to value accurately).

The color of the variety is very dark, and a lot the examples offered are just not dark enough to be the true color. That is why expertization is necessary.

Used examples need a dated cancel from the early 1970s, which is when the shade was printed, based on the plate number being in use around mid-1971.

Examples properly used in period on cover are especially desirable by exhibitors of the Prominent Americans series.

The color variety is in demand and is a good buy in mint never-hinged condition, used condition and as plate block of four at or near Scott catalog value.