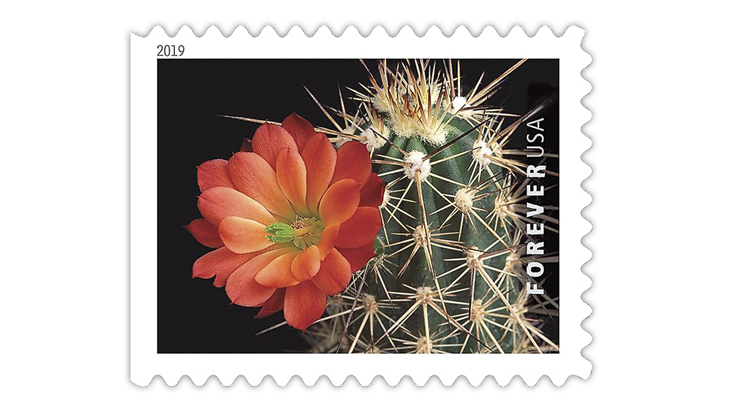 Pictured here is Echinocereus coccineus, one of 10 Cactus Flowers stamps to be issued Feb. 15. The nondenominated (55¢) cactus stamps pay the increased fee for letter-rate postage that went into effect Jan. 27. 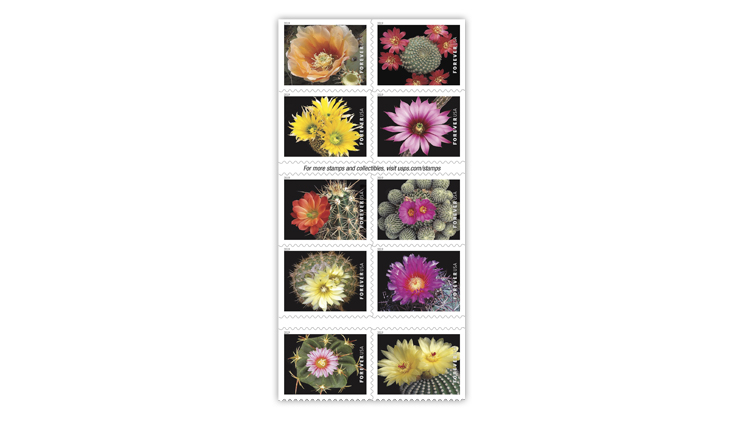 The Feb. 15 first-day ceremony for the Cactus Flowers stamp set of 10 will take place at the APS Ameristamp Expo in Mesa, Ariz. 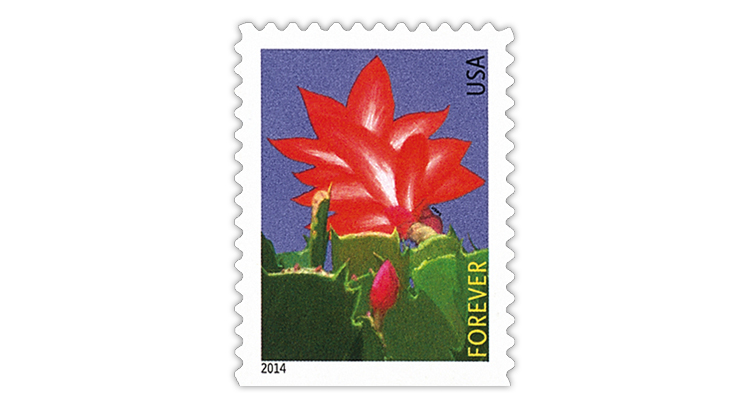 A Flowering Cactus forever stamp was issued Feb. 14, 2014, as part of the Winter Flowers set of four. At the time of issue, the letter rate was 49¢. 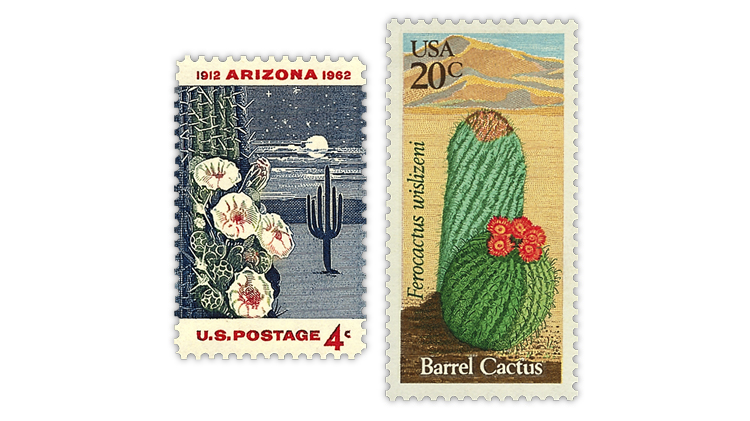 A flowering giant saguaro is featured on the 4¢ Arizona Statehood stamp issued Feb. 14, 1962. Flowering cacti are also among the four desert plants depicted on 20¢ stamps issued in a set on Dec. 11, 1981, including these barrel cacti. 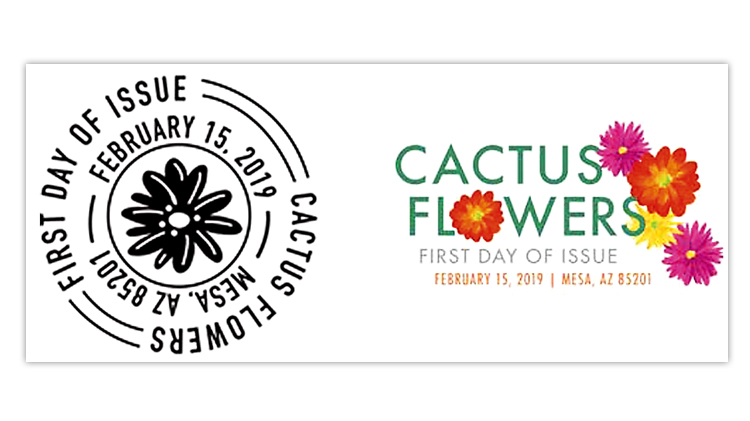 A set of 10 Cactus Flowers forever stamps will be issued on the morning of Feb. 15, with a ceremony at the winter stamp show and exhibition of the American Philatelic Society.

The APS Ameristamp Expo is taking place in Mesa, Ariz., alongside the annual Aripex stamp show sponsored by the Arizona Federation of Stamp Clubs.

The first-day ceremony for the new stamps will take place at 11 a.m. Mountain Standard Time at the show site, the Mesa Convention Center, 263 N. Center St.

The first-day ceremony is free and open to the public. The Postal Service encourages registering in advance online at www.usps.com/cactusflowers.

Admission to Ameristamp Expo, which runs from Feb. 15-17, is also free.

The Postal Service provided identification of the cacti featured on the 10 different stamps using their scientific names.

Cacti also have common names, such as “silver ball cactus” for Parodia scopa. Some of the plants are known by several different names.

“With new DNA studies, botanists sometimes reclassify plants,” the Postal Service said. “As of the printing of these stamps, the scientific names are accurate.”

The photographs on these stamps were all taken by John P. Schaefer, University of Arizona president emeritus. Schaefer and Ansel Adams founded the Center for Creative Photography at the university in 1975.

Several of the cactus photographs shown on the stamps and others can be viewed at www.johnpschaefer.com.

The stamps were designed by USPS art director Ethel Kessler.

Most cacti are succulent plants that store moisture in the fleshy stem of the plant. Instead of leaves, the cactus often displays spines found in different colors, sizes, shapes and textures.

The flower blooms also vary significantly among the many known species of cacti. Colorful and showy, they have been described as “Mother Nature’s fireworks” by National Geographic.

Cactus flowers have been featured on U.S. stamps as recently as 2014, when a flowering Christmas cactus was pictured on a nondenominated (49¢) forever stamp in the Winter Flowers set of four (Scott 4865).

Earlier U.S. stamps showing cacti in bloom include a 4¢ stamp celebrating the 50th anniversary of Arizona statehood in 1962 (Scott 1192), which depicts a giant saguaro cactus, and two stamps in the 20¢ Desert Plants set of four, with the barrel cactus on one (1942) and the beavertail cactus on another (1944).

The Postal Service has revealed designs for two pictorial first-day cancels that will be used to postmark first-day covers for the new stamps.

The black cancel is rounded with a bloom showing 12 petals in the center. The color cancel includes five cactus blooms in three different types.

Because the double-sided pane of 20 is regularly offered at post office counters, the Postal Service has announced a large initial printing of 400 million stamps (20 million panes).