Colorful stamps showcase the culture and history of Polynesian islands 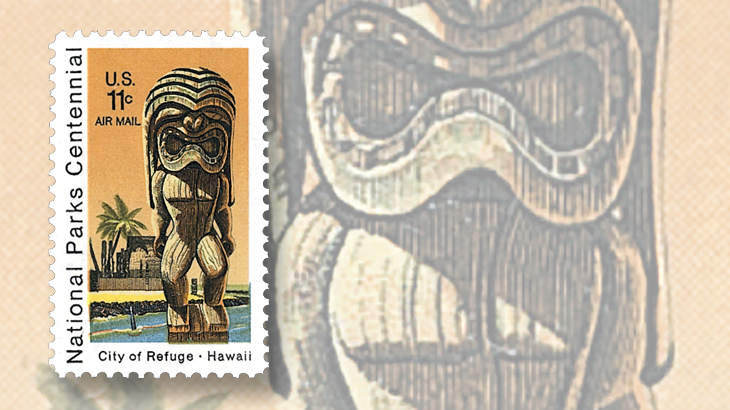 A tiki from the City of Refuge National Historical Park in Hawaii is portrayed on this 1972 United States airmail stamp. 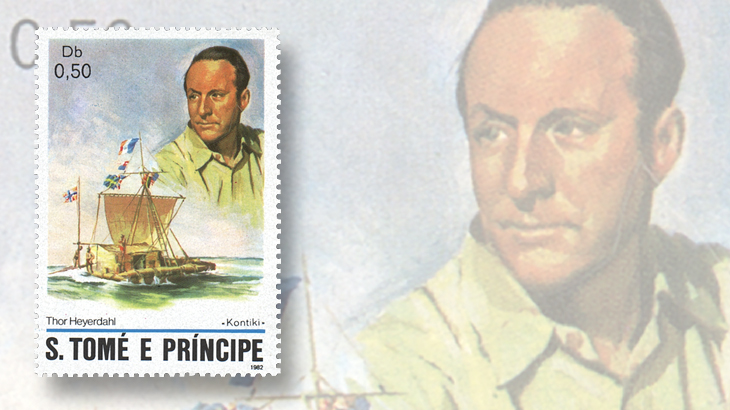 A St. Thomas and Prince Islands stamp honors Thor Heyerdahl, who recreated an ancient type of raft and sailed it from Peru, in an effort to prove that Polynesians originated in South America. 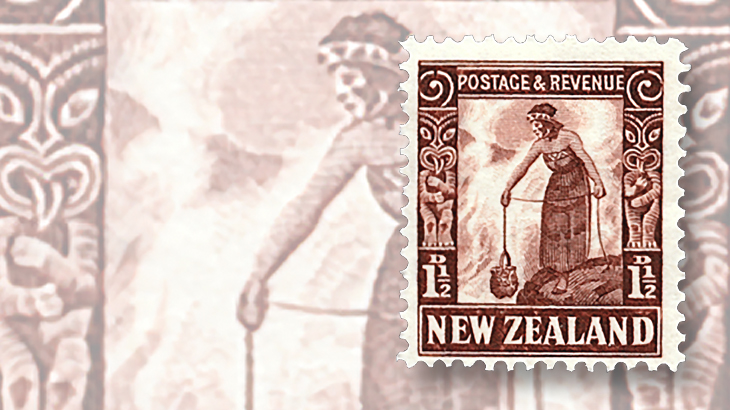 New Zealand first used tiki images on stamps on this issue of 1935, framing a Maori woman cooking in a natural hot spring. 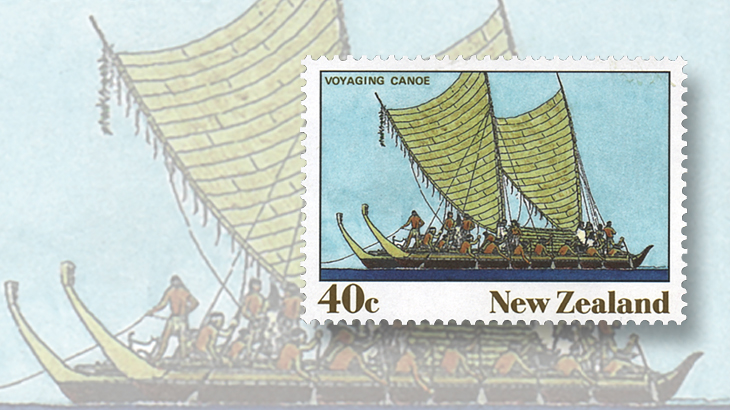 Polynesian voyaging canoes similar to this one could have carried brave emigrants across thousands of miles of ocean. 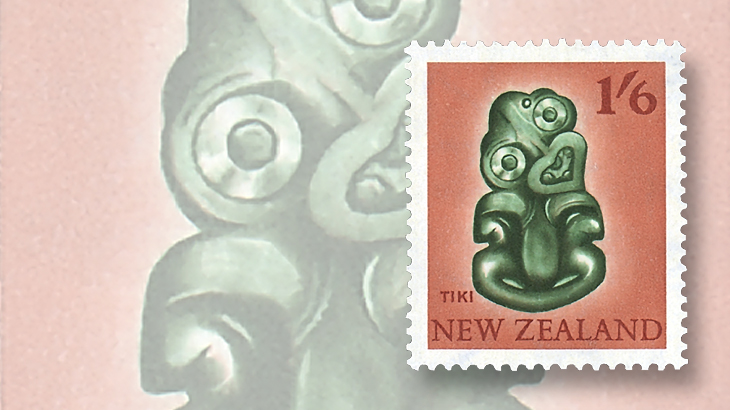 A hei-tiki, which is a single carved tiki worn as a necklace, appears on this 1960 New Zealand issue. 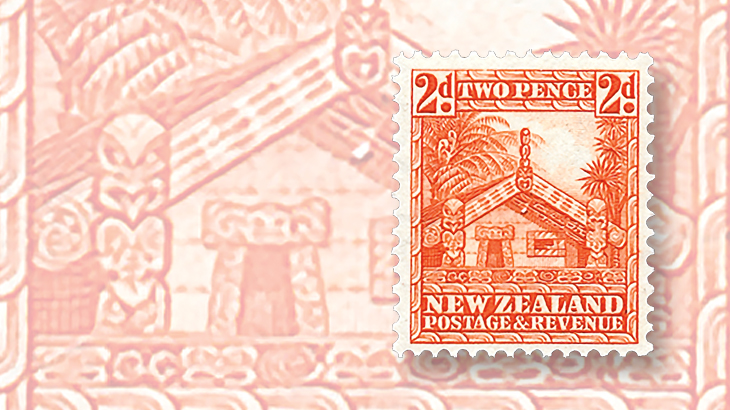 Polynesian culture throughout the Pacific has a rich and fascinating history. Until very recent times, scientists, archaeologists, linguists, oceanographers, anthropologists, and explorers were at odds with one another in the debate over the origin of Polynesians.

To prove his theory, in 1947 Heyerdahl and a crew of five men began a westward drift on a raft made of nine balsa-wood logs, with a small sail. The raft was named Kon-Tiki, which was believed to be the earliest name of the Inca sun god.

The raft sailed 4,300 nautical miles in 101 days, from Peru to the Marquesas Islands, finally smashing on a reef in the Tuamotu Islands in French Polynesia.

Heyerdahl and the Kon-Tiki are shown on a stamp issued by St. Thomas and Prince Islands in 1982 (Scott 671).

Heyerdahl successfully demonstrated that a raft using materials and methods available in ancient Peru could sail as far as French Polynesia, but he failed to produce confirming evidence that Polynesian heritage emanated from South America.

It wasn’t until 2011 that scientists from Leeds University in the United Kingdom, using DNA testing, were able to trace and prove genetic links between Polynesians and inhabitants of parts of Southeast Asia and Melanesia, including ancient links with New Guinea. Voyaging canoes could have carried small groups of emigrants thousands of miles across the Pacific to uninhabited islands.

A voyaging canoe consisted of two hulls carved from logs and then covered by a platform. The platform had a deck, and there were two sails made from woven pandanus or flax.

These amazingly engineered voyaging canoes probably provided the means for Polynesians to populate hundreds of Pacific islands scattered within a huge area known as the Polynesian triangle.

At the northernmost angle is Hawaii; at the southernmost point lies New Zealand; and at the eastern angle is Easter Island, home of the Rapa Nui culture and the giant ancient carved stones known as moai that are pictured on a Chile 6-centavo stamp issued in 1965 (Scott 347).

It has been estimated that Polynesians began settling in Tonga and Samoa about 3,000 years ago. They would have brought food sources with them, including pigs, dogs, chickens, yams and bananas. They also brought their own form of religion and gods.

One of the most identifiable Polynesian images is the tiki, a carved wooden figure that represents the first man. According to legend, the New Zealand Polynesian Maori god Tane, god of birds and forests, was the progenitor of the first man, who was named Tiki.

New Zealand has a long postal history of honoring the country’s Polynesian Maoris. The first identifiable tikis are found on New Zealand stamps issued from 1935 to 1947.

A pair of tikis on a 1½-penny stamp issued in 1935 formed a frame for a Maori woman cooking food by lowering it into a natural hot spring (Scott 187).

The 1936 2d New Zealand stamp (Scott 188) of a whare (Maori council meeting house) has three tikis, one on each side of the building and another at the peak of the roof.

A wonderful armchair tour of Maori buildings and incredible carvings can be seen online in a series of programs at www.maoritelevision.com/tv/shows/whare-maori.

Tikis or hei-tikis are still popular stamp subjects for New Zealand. New Zealand Maoris create the carved ornaments called hei-tiki. These are generally carved using nephrite, most often green nephrite (also called greenstone), but they also can be of other colors.

A stunning souvenir sheet issued in New Zealand in 2009 has six different colored hei-tikis (Scott 2255). These small carved tikis represent fertility and should only be worn by women as a neck ornament. Some say the image is that of a human embryo.

Many, though not all, of the Polynesian islands have issued tiki stamps. French Polynesia released an interesting tiki stamp in 2003 (Scott 858) and then reissued it in 2006 on shiny paper and with deeper colors.

The United States issued an airmail stamp in 1972 featuring a tiki design (k’ki in Hawaiian), to honor the City of Refuge on the island of Hawaii (Scott C84).

The stamp marked the national parks’ centennial. The carved wooden image is of Ku, the god of war and one of the four ancient Hawaiian gods.

Places of refuge were havens in ancient times where people who broke sacred laws — actions punishable by death — could find safety.

The City of Refuge is now called by its Hawaiian name, Pu’uhonua o Honaunau.

The field of knowledge is huge, though still incomplete, about the hundreds of islands within the Polynesian triangle and the amazing people who found their way there 3,000 years ago.

Stamps can add to our own information about Polynesia, in beautiful and highly collectible ways.