Combined demurrage fee and postage due marking on 1943 cover 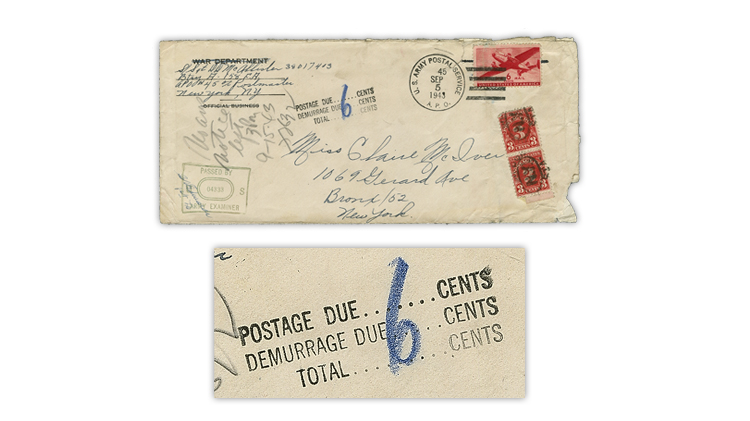 Demurrage markings, such as the one on this 1943 cover, are scarce. This cover is one of three known with the dual postage due and demurrage marking. None of these three covers actually indicate payment of a demurrage fee.

Chances are few collectors today could define “demurrage,” the word included as part of the handstamped postage due marking on the 1943 cover shown nearby. I certainly had to look it up when I acquired the cover.

The book U.S. Domestic Postal Rates, 1872-2011 by Anthony S. Wawrukiewicz and Henry W. Beecher, explains what a demurrage fee is: “Finally, there was always a limited period of time during which the addressee of a domestic C.O.D. [cash or collect on delivery] item had to remove it from the delivery post office … This length of time the post office might hold the C.O.D. item for pickup could be extended for a fee, for part of the period when the C.O.D. service was available (from October 1, 1930, to July 24, 1968). This fee was called demurrage.”

In effect, it is a storage fee.

In the case of this 1943 cover, it is marked 6¢ due. Despite the location of the “6” in the three-line marking, that is not a demurrage charge. We know this because that charge in 1943 was 5¢, and this is not a c.o.d. cover. So, it would appear that the cover required two times 6¢ based on weight. The cover is franked with the 1941 6¢ Twin-motored Transport Plane airmail stamp (Scott C25) and has two 3¢ postage due stamps attached.

Linn’s reader Dave Moore reported a 1966 cover with this same marking, but with no demurrage fee being charged. I also know of one other use of this marking where only postage due was charged.

So, in total, I know of three covers with this marking, but none of them were actually charged a demurrage fee.

In correspondence with Wawrukiewicz, he told me that he has never seen a combined marking like this where demurrage was charged, and that he has seen only one example (using a different marking) where it was.

‘Do I have a great rarity? I hope so.’ The triumph of hope over reality