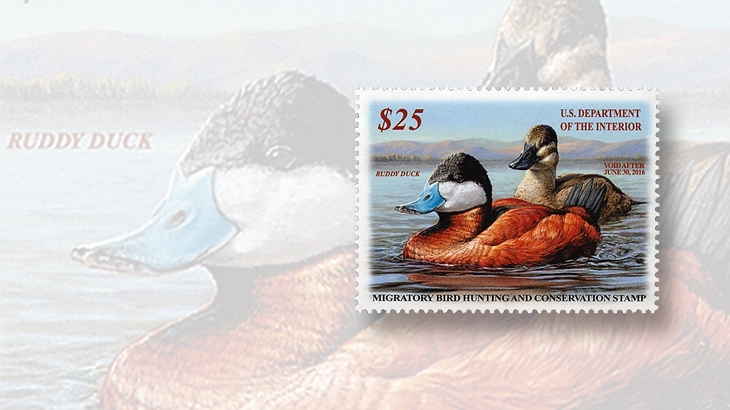 The $25 Ruddy Ducks federal duck stamp issued in 2015. A proposed new regulation for the 2016 federal duck stamp art contest will require the inclusion of "an appropriate non-waterfowl migratory bird species in the artwork design."

The comment period for a proposed rule change affecting the 2016 United States federal duck stamp art contest was extended for one week. Anyone interested in commenting on the proposed changes can do so at the regulations website by March 21 at 11:59 p.m. Eastern Time.

As reported by Linn’s Stamp News in the Feb. 29 issue, a planned change to the rules governing the contest will require that artists “include an appropriate non-waterfowl migratory bird species in the artwork design.”

The U.S. Fish and Wildlife Service provides additional detail on its website, stating:

"It is anticipated that an appropriate, identifiable non-waterfowl, migratory bird species will be a mandatory requirement on all entries beginning in 2016.

"Non-waterfowl migratory bird species is defined as any species on the List of Migratory Birds other than species in the Order Anseriformes.

"Appropriate is defined as any species that would naturally be expected to occur with the depicted eligible waterfowl species in the same season and habitat.

The federal migratory bird hunting and conservation stamps, commonly known as duck stamps, are popular collectibles. They are listed and valued with U.S. revenue stamps in the Scott Specialized Catalogue of United States Stamps and Covers, and in Vol. 1 of the Scott Standard Postage Stamp Catalogue.