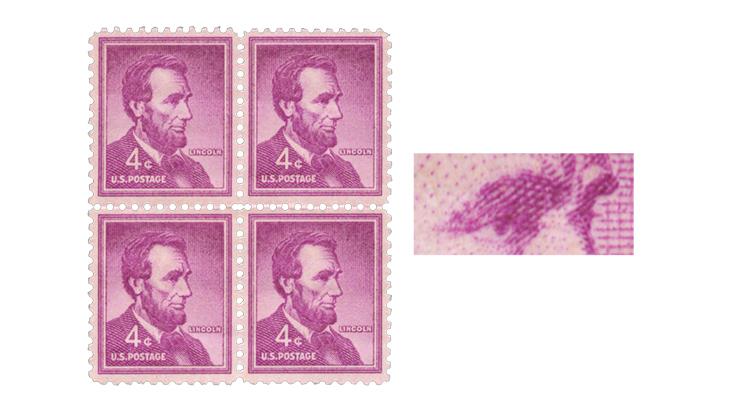 Figure 1. The genuine 1954 4¢ Abraham Lincoln stamp, shown here in a block of four, differs in many ways from the counterfeit shown in a block of four in Figure 2. One noticeable difference is the quality of the printing, which is distinct on the genuine stamp. Compare the close-ups of Lincoln’s eye from the two blocks. 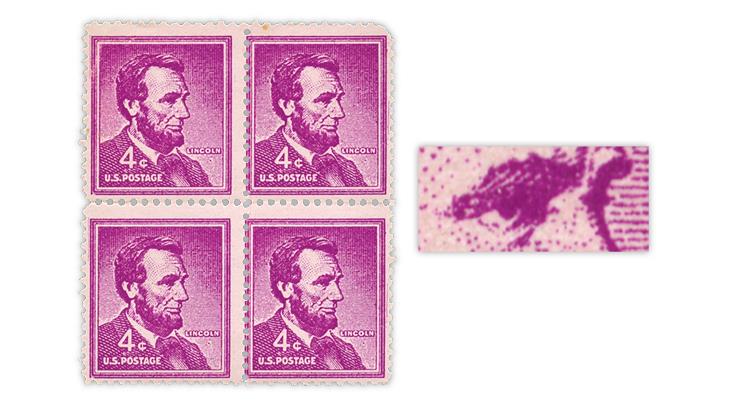 Figure 2. The 1954 4¢ Lincoln counterfeit stamp was produced using a coil stamp (instead of a sheet stamp) as the model, as a result the counterfeit is wider and shorter than the genuine stamp. Other differences are described in the column. 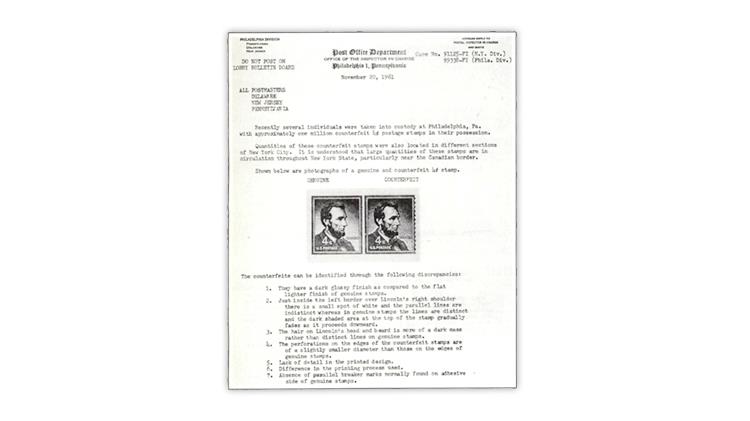 Figure 3. Shown from a 1994 article in the American Philatelist, this notice describing the differences between genuine and counterfeit examples of the 1954 4¢ Abraham Lincoln stamp was sent in November 1961 to all postmasters in Pennsylvania, New Jersey and Delaware.
Previous
Next

United States postal counterfeits — those labels produced with the specific intention of taking revenue from the post office and giving the ill-gotten gains to the producer and his gang — is a difficult and fascinating area of collecting. At least it was until about 20 years ago when photogravure replaced line engraving as the standard printing method for workhorse U.S. definitives.

As Linn’s has documented, these days counterfeiting has become something of a cottage industry. But for most of the 20th century, it was a criminal enterprise that was relatively rare. And it was often kept in check with arrests made and stocks confiscated because credible counterfeits of line-engraved stamps were easy to spot.

According to the book Spurious Stamps: A History of U. S. Postal Counterfeits by retired postal inspector H.K. Petschel (published by the American Philatelic Society in 1997), the 4¢ Lincoln case came to light in September of 1961, when an FBI informant advised that counterfeits were to be offered for sale.

The informant facilitated a buy by government agents. That led to the confiscation of a million counterfeit stamps in Philadelphia, and the arrest of three people who were ultimately convicted of possession and sale of counterfeit stamps.

Information supplied later by another informant revealed that the counterfeits had been produced in the basement of a funeral home in New York City. Distribution had begun in New York and then spread to Baltimore and Philadelphia.

It is not known how many of these counterfeits were sold to retailers, used in vending machines owned by the mafia, or disposed of by guilty parties once the government’s enforcement actions became known on the street. But there were enough counterfeits to warrant a November 1961 notice prepared by the Philadelphia Postal Inspector’s Office to warn all postmasters in Pennsylvania, New Jersey and Delaware to be on the lookout for them.

The notice is shown here in Figure 3 from an article by Ken Lawrence in the September 1994 issue of the American Philatelist (the monthly magazine of the APS). The notice reads, in part: “Quantities of these counterfeit stamps were also located in different sections of New York City. It is understood that large quantities of these stamps are in circulation throughout New York State, particularly near the Canadian border.”

The notice pictures examples of a genuine stamp and a counterfeit, and below the images it provides seven points of comparison that can be used to identify the counterfeits. These points are not written from a collector’s perspective, so allow me to translate.

The gum of the genuine stamp has parallel horizontal gum breakers (ridges). The counterfeit has flat gum.

Unfortunately, the whereabouts of the notice pictured in the American Philatelist article is not known, though given the wide distribution of the notice, others may exist.

Examples of the counterfeit on cover must exist, but I have never seen one. At least one full pane exists in collector hands. It shows plate No. 24601, a plate that was actually used to produce genuine stamps.

Petschel expanded upon the case, especially regarding the prosecution of the three felons arrested in Philadelphia, in his 2014 self-published book More Stamp Counterfeiting: The Perfect Crime.

Linn’s readers who would like a more thorough understanding of U.S. postal counterfeits are referred to Petschel’s books and the Postal Counterfeits section of the Scott Specialized Catalogue of United States Stamps and Covers.