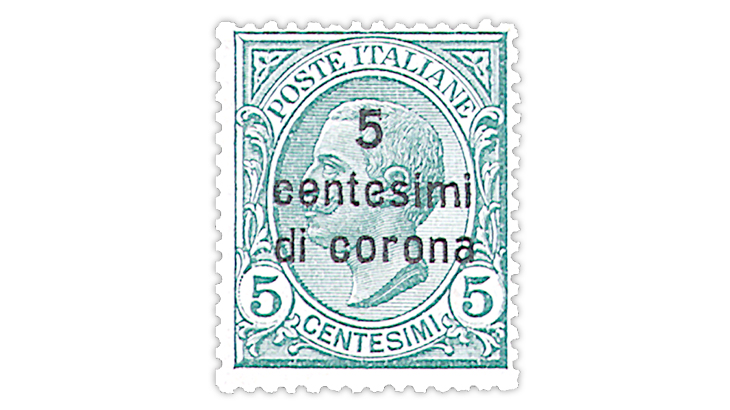 The Scott Classic Specialized Catalogue of Stamps and Covers 1840-1940 catalog value for the whole country of Dalmatia is just $434 for stamps in unused hinged condition. They are a good buy at that price in fine-very fine grade.

A strip of coastline and several large islands on the Balkan peninsula on the eastern shore of the Adriatic Sea, Dalmatia was possessed by the Republic of Venice before becoming a crown land of the Austro-Hungarian Empire.

It was partially controlled by Italy from 1918 to 1922, before passing to Croatia. As such, it was later part of Yugoslavia. Today it remains as one of the four historical regions in independent Croatia.

The stamps listed under Dalmatia in the Scott Classic Specialized Catalogue of Stamps and Covers 1840-1940 are difficult to distinguish from the Italian occupation stamps issued for Austria during World War I. Both were created by overprinting and surcharging Italian stamps in centesimi di corona (as opposed to the Italian currency, centesimi di lira).

The overprints are very similar except for the first Dalmatian stamp (Scott 1) which spells out “una” instead of using a numerical value.

Also, the overprints on the Dalmatian stamps are in a sans serif typeface, while the overprint on the occupation of Austria stamps uses a serif font similar to Times Roman.

The Scott Classic Specialized catalog value for the whole country of Dalmatia is $434 for stamps in unused hinged condition.

The stamps are a good buy at that price in fine-very fine grade with the stamp designs not cut by the perforations. However, they are very hard to find in that grade as most of the issues are badly centered.

The Scott Classic Specialized catalog values for used examples are all in italics as they are rarely bought or sold and all require expertization for genuine cancellations. Commercial covers are very scarce and valuable.