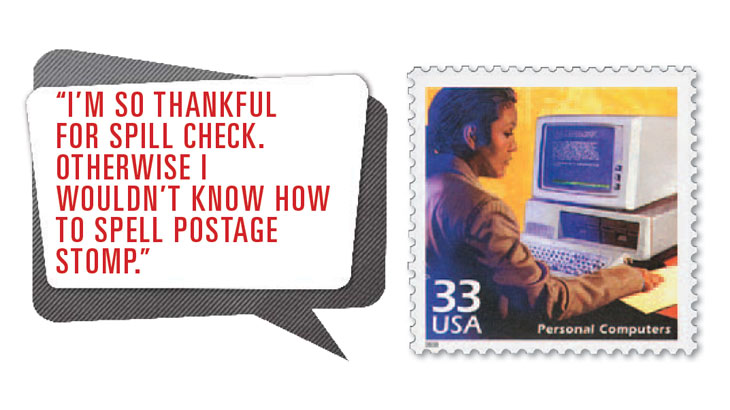 The June cartoon caption contest stamp featured the 33¢ Personal Computers stamp from the Celebrate the Century pane of 15 featuring the 1980s. The winner of the philatelic part of the contest is the Rev. David Mulligan of Marshfield, Vt. The next cartoon

Computers can be a mixed blessing, and several entries from Linn’s readers in the June cartoon caption contest used that as a theme.

The contest featured the 33¢ Personal Computers stamp (Scott 3190n) from the Celebrate the Century pane of 15 featuring the 1980s.

Allen Hoffman of New York City makes a dire prediction in this entry, “This email thing is going to kill stamp collecting!”

There’s no doubt that email has had an impact on stamp usage. For instance, first-class mail has dropped. On the other hand, the personal computer has proven to be a major new resource to enable many stamp collecting activities.

It is too bad that computers can’t be programmed to flash red warning lights when someone tries to use the internet to defraud users.

David D’Hondt of Sun City, Calif., captures this problem with “Wow! A free Zepp plate block if I type in my social security number and password!”

David Schwartz of Commack, N.Y., raises another issue that has been in the news recently with “Why do I feel that someone is watching me?”

Another popular theme was the way in which the expanding uses of computers rapidly outstripped its initial capabilities. Alex Hamling of Seattle, Wash., took this on with “Now fully stocked with 640k of memory. Hmmm …That’s probably more than I’ll ever need.”

The winner for the nonphilatelic part of the contest comes from David Kiehn of Collierville, Tenn., who expresses a bit of frustration about the use of computers for online games with “PONG? What’s a pong?!”

On the philatelic side, the winning entry is from the Rev. David Mulligan of Marshfield, Vt., which shows that the need for proofreading has not gone away.

“Have to wait to log in — Darn party line!” sent by Thomas Riffe of Galloway, Ohio.

“I wish I could just pack this up and take it to a coffee shop,” from Rich Wolf of Westminster, Md.

“Oh, no … Not another blue screen of death!” by Bill Irvin of Louisville, Ky.

“Wow, computers are so small they can fit on a postage stamp!” sent by Mildred and Doug Barylski of Warrenton, Va.

“This computer is making me sick. If I stay on it much longer, I’m sure I’ll catch a virus,” from Steve Kotler of San Francisco, Calif. Thanks and a tip of the hat to all who entered.

The next contest will be announced in the Aug. 5 issue of Linn’s.