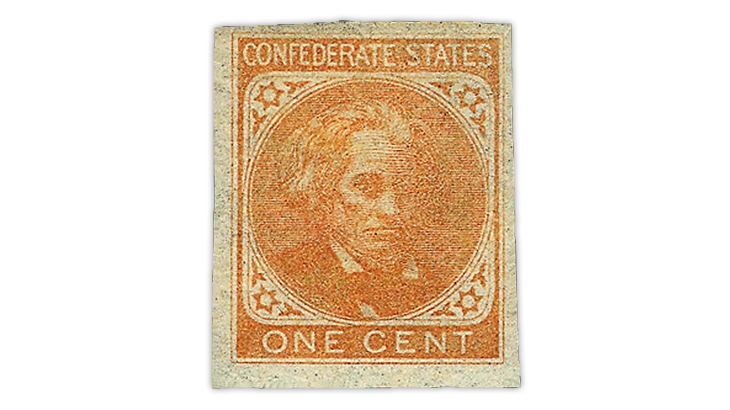 The Confederate States of America 1¢ orange John C. Calhoun imperforate stamp (Scott 14) is a good buy in very fine grade at 80 percent to 90 percent of the 2019 Scott Specialized Catalogue of United States Stamps and Covers value.

Collecting the Confederate States of America is popular with a dedicated group of collectors. Although there are only 14 major number, general issue Confederate stamps listed in the 2019 Scott Specialized Catalogue of United States Stamps and Covers, the addition of minor number varieties, postmasters’ provisionals and postal history gives a wide range of specialization possibilities.

One of the major number stamps listed in the Scott catalog, the 1¢ orange John C. Calhoun imperforate stamp (Scott 14), was never actually put into use.

A towering political figure, Calhoun (1782-1850) held enthusiastic support for slavery and an extreme position on states’ rights, factors that would eventually lead to the Civil War.

The color is often very weak and the design faint on Scott 14, so many collectors prefer the deep orange variety (Scott 14a), which is much more attractive and shows the design details more clearly.