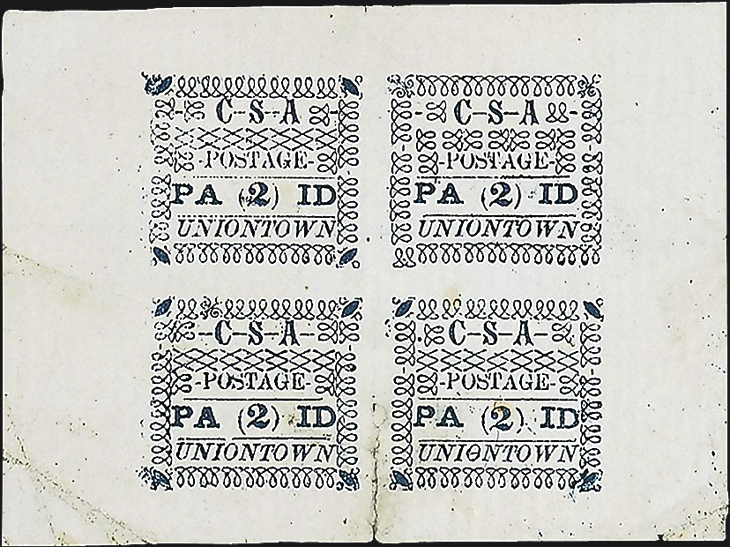 The unique Uniontown, Ala., 2¢ dark blue on white paper postmaster’s provisional stamp in a pane of four. Image courtesy of Robert A. Siegel Auction Galleries.

Not only is this work an important study for collectors of Confederate States of America philately, but it also emphasizes the importance of censuses to stamp collecting.

In the preface to this handbook, Crown states that the idea for the study came while he was working on the provisional section of a much larger work, the Confederate States of America Catalog and Handbook of Stamps and Postal History, published in 2012.

Crown’s objective was to determine the number recorded of the two types of 5¢ provisionals.

He explains in the preface that to determine the number recorded he needed a census, and “to prepare a credible census,” he needed to collect and compare images of all stamps he could find.

Censuses are essential research tools in many areas of the stamp hobby. Historical data about our stamps and covers play a critical role in our hobby, and accurate information is crucial whether you are adding to your collection or selling items from your collection.

Fortunately, collectors and dealers such as Crown take the initiative in creating censuses and share them with fellow collectors.

Extensive information is available on the site for U.S. stamps. Data on worldwide rarities has only recently been added to the census. This effort is being spearheaded by Andrew Titley of Siegel International.

Richard Frajola maintains censuses for covers on his website.

Frajola’s site provides a wide variety of data on more than 20,000 U.S. covers, as well as highly specialized areas of postal history, including Pony Express, California Penny Post and “Via Tehuantepec” covers.

Collectors owe a debt of gratitude to collectors such as Crown, and dealers such as Scott Trepel of Siegel, Titley, Frajola, and others who compile data and willingly share it with others in the hobby, whether it be through online websites, books, or reference works. Through their generosity, this great hobby of ours thrives and becomes more vibrant.