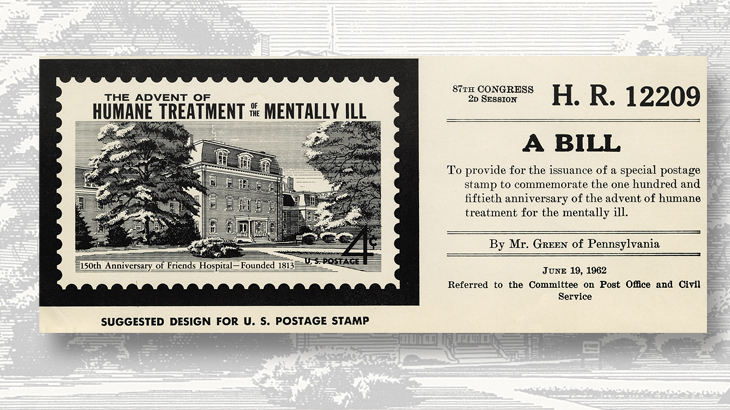 This proposed design for a stamp to mark ”The Advent of Humane Treatment of the Mentally Ill” was part of a 1962 bill introduced by Rep. William J. Green Jr. of Pennsylvania. Such a stamp was never issued.

A mental Illness stamp proposal in 1962 failed to pass muster.

Linn’s reader Tom DeBoever recently wrote to tell me about a discovery he made while closing out the files of the Wayne County Stamp Society in Detroit, Mich.

What he found was a letter dated Oct. 21, 1962, from the secretary of the Wayne County Stamp Society supporting the issuance of a commemorative stamp to honor “the Advent of Humane Treatment for the Mentally Ill.”

The stamp would have marked the 150th anniversary in 1963 of the founding of the Friends Hospital in Philadelphia, Pa., the nation’s oldest private psychiatric hospital.

The stamp had been proposed in a bill introduced in Congress by Rep. William J. Green Jr. of Pennsylvania. A proposed design was included.

As routine, the bill was referred to the Committee on Post Office and Civil Service. The fate of the bill is unknown to me, but passage would not have guaranteed a stamp.

The Citizens’ Stamp Advisory Committee was established in 1957 to recommend stamp subjects to the postmaster general. The committee would have had to include this subject in the program proposed for 1963. Given that such a stamp was not issued, we can infer that it was not included.

Would it have been worthy? The appeal in Green’s introductory speech to the House makes a good case: “We could do well to recognize the benevolence and foresight of medical pioneering by the Quakers of 1813, and the significant contributions of those who followed the dedicated cause of alleviating the problems of mental illness.”

Carl P. Rueth editorialized on the subject in the June 11, 1962, issue of Linn’s, “I would say the subject is of equal, or more importance, than such minority inspired vote-getters as the Homestead Act, the Workmen’s Compensation Act, Apprenticeship Act, and the like kind of boondoggling labels.”

The quote was included in an August 1962 letter from G. Belson Watts, the business manager of the hospital. The letter is addressed “Dear Philatelist.”

Mental illness remains a subject not explicitly addressed on U.S. stamps, although a proposal for a mental health semipostal stamp was made in 2015.

The proposal, H.R. 3640, was introduced in September by representatives Carlos Curbelo (R-Fla.) and Grace Napolitano (D-Calif.)

“Proceeds from the sale of this stamp must be transferred to the National Institute of Mental Health to help fund mental illness research and suicide prevention programs.

“The stamp must be available to the public for at least six years.”

The bill remains in committee.