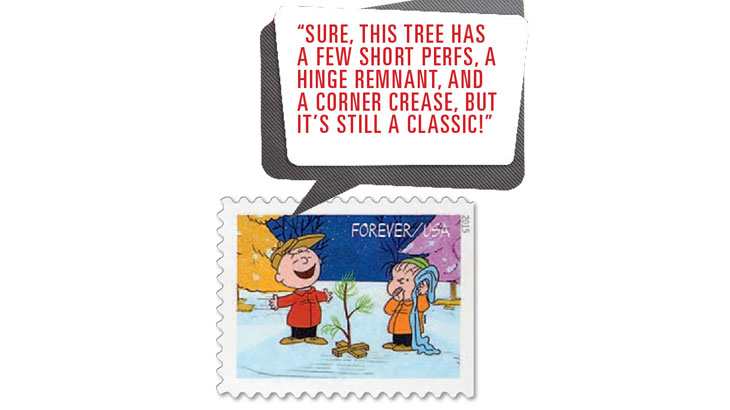 The December cartoon caption contest featured the forever stamp showing Charlie Brown’s Christmas tree from the 2015 booklet of 10 marking the 50th anniversary of the 1965 TV special A Charlie Brown Christmas. The winner of the philatelic part of the cont 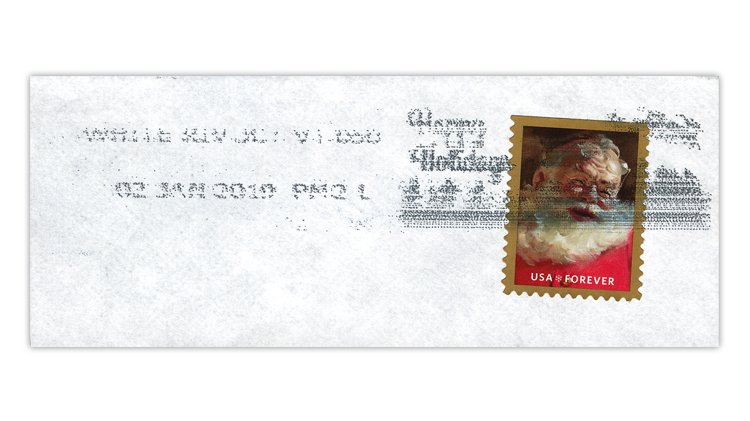 Despite complaints about similar destructive cancels from prior years, this example of this holiday cancel is dense enough to make the stamp uncollectible.
Previous
Next

If, like many stamp collectors, you are upset with the messy, obtrusive cancellations that the United States Postal Service has been using for years at Christmastime, you will appreciate the direct way in which Charles Wales of Ashburn, Va., responded to the December cartoon caption contest featuring the forever stamp picturing Linus, Charlie Brown and his rather threadbare Christmas tree (Scott 5028) from the 2015 Christmas booklet of 20 (10 designs).

Wales has Charlie Brown saying, “I hope we can decorate the tree with Christmas stamps we get in the mail — if we can find enough where the holiday cancel doesn’t obliterate the nice designs.”

The example of the 2018 cancellation shown above is not even the heaviest version that has been the norm. Of the Christmas cards I received in 2018, more than two-thirds of them have stamps that are uncollectible.

While it is true the Postal Service must assure that cancellations invalidate stamps for further use, it has again this year turned virtue into vice with an unnecessarily heavy and dense cancellation that obliterates the stamp design. This is despite a plethora of complaints received for doing the same thing in prior years.

What these heavy cancellations say is that the Postal Service doesn’t care about collectors of used stamps, something it has already demonstrated with unwashable self-adhesives. This is short sighted.

Casual collectors — the type the USPS wants to sell mint stamps to — often start by collecting used stamps. And even longtime collectors like used stamps because they show that they served the purpose for which they were issued.

Please forgive the rant. Back to the cartoon contest results.

The Christmas tree depicted on the contest stamp is what might be called a “remainder.” Timothy Comas of Westminster, Md., converts this to a stamp theme with his entry that won the philatelic part of the contest.

On the nonphilatelic side, the winner is from Larry Elseman of Ankeny, Iowa: “I bought this for peanuts!”

“It’s all I can afford, what with the increase in postage rates,” by Mildred Barylski of Warren-ton, Va.

“With this great Christmas tree, I’m sure I’ll get a card from that pretty girl with the red hair,” from W. Bruce Pruitt of Roseville, Calif.

“Merry Christmas to all the ‘Trees on Stamps’ collectors!” from Jack Leonard of Hatboro, Pa.

“Linus, we need a Christmas Miracle-Gro!” by Dolores Chiaramonte of Valley Stream, N.Y.

“We waited forever, but we finally got a set of stamps to die-cut for!” from Steve Kotler of San Francisco, Calif.

The next contest will be announced in the Feb. 11 issue of Linn’s.