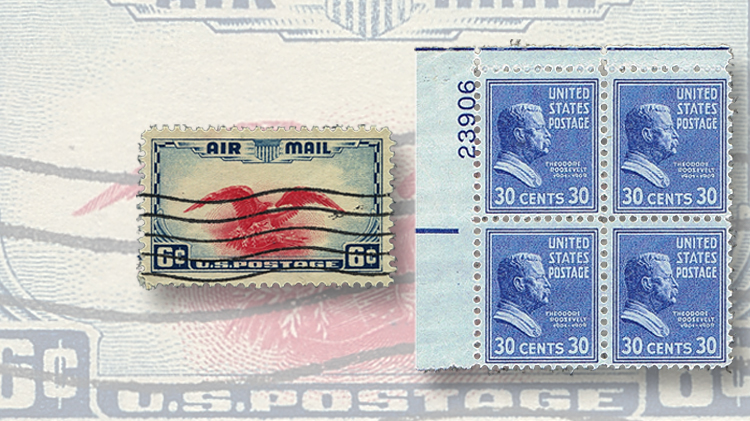 A color misregistration of Scott C23, long a part of the author’s own collection, also seems to be the “ultramarine” shade. Compare this color to that of the 30¢ Presidential next to it, which the Scott catalog describes as “deep ultramarine.” Is it possi 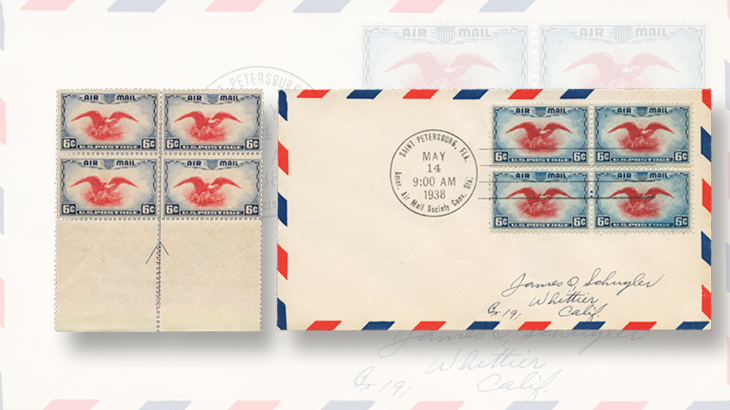 The author of this column recently acquired a bottom margin block of four of Scott C23c, the 1938 6¢ airmail stamp that the Scott U.S. Specialized catalog describes as “ultramarine and carmine.” Compare the block to the normal blue color on a first-day co
Previous
Next

I might have been too hasty in suggesting in my expertizing column published Feb. 2 on Linns.com that Scott C23c, the 1938 6¢ Eagle airmail with an ultramarine frame, be deleted from the Scott catalog. And maybe not.

The normal version of C23 is listed in Scott as having a frame that is “dark blue.” There has been controversy about the “ultramarine” frame version since it was discovered. The controversy centers on whether the variety is a differentiable color resulting from a different ink, or merely a shade.

In the earlier column, I noted that it was hard to pontificate on the subject because I didn’t own and hadn’t examined any examples of Scott C23c.

However, I now own an expertized block. You can compare the blue of this block to the blue of the block on the first-day cover, both of which are illustrated here.

Thanks to Linn’s reader Robert Rufe, I also have a number of clippings from 1945, when the discovery of this variety was made.

The most interesting is an Aug. 18, 1945, ad from Stamps magazine. It reads, in part: “Ten sheets of this stamp in ULTRAMARINE and carmine were discovered in Texas. The character and color of these stamps is such that they should have been removed by the Bureau [of Engraving and Printing] during examination and not permitted to get into circulation.

“This is not a mere shade difference but is a true error of color. … [W]e are informed that these new stamps will be listed in the 1946 catalogue.”

The ad was placed by dealer Emil Bruechig of New York City, and in it he notes that each stamp he sells will have his guarantee mark on the back. My block is signed in that fashion, and also has the signature of I. Heiman in the bottom margin on the reverse.

Bruechig’s ad prices a mint single at $100, and prices each position block also. In the case of my bottom-margin arrow block, his asking price for the entire bottom two rows (10 stamps) was $1,200. The 2017 Scott Specialized Catalogue of United States Stamps and Covers lists a mint single at $160, but does not list the bottom block. It does list a mint center-line block at $1,200, and a plate block at $1,500.  The latter two values are listed in italics.

What is stunning is the values that Scott assigns to a used example: $1,500 for a used single (with an identifiable contemporary cancel), and $1,750 on cover with a contemporaneous cancel (again both values are in italics). This is because the great majority of the stamps were sold as mint collectibles, and very few were used for postage.

That these stamps are different from the normal blue colors associated with the issue, there can be no doubt. But I would offer two observations. First, the purported error is not very different from the used color misregistration shown, which has been in my collection for decades.

Second, the color of the error is decidedly not ultramarine.

For ultramarine, think of the later printings of the 30¢ Theodore Roosevelt  Presidential stamp (Scott 830), which Scott lists as “deep ultramarine.”

For the expertizer, this presents something of a nightmare. It is not unusual to find used and even mint examples of Scott C23 that match up favorably with the signed block shown here, but they are not signed.

That does not mean they are not real, because at least one other major discovery was made. Furthermore, it is likely others were simply purchased and used with no thought given to the color anomaly.

Another thought to add to this mix: I can’t dismiss the possibility there is some way to chemically darken the normal color of that airmail stamp.

In a May 16, 1992, article in the late, lamented Stamp Collector newspaper, the venerable Herman “Pat” Herst delivered his opinion on the subject. His bottom line is summarized in this excerpt: “It is in the catalog today as a listed variety, priced at $150. This is a big price for what in my unaltered opinion is an unimportant shade variety.”

Herst based his opinion on a letter from George R.M. Ewing, a collector whom he characterized as one of the foremost collectors of 20th century United States stamps.

Here is the relevant passage of the Ewing letter: “Some stamps get listed in the catalog in mysterious ways. When Emil Bruechig first submitted his ‘ultramarine shade’ [now listed as Scott C23c], Hugh Clark sent the submitted stamps up to me at my summer home in New York State.

“I was then serving on the Catalog Listing Committee of the [Bureau Issues Association]. Emil wanted them listed as an ‘error’, but I strongly fought that term and said it was just a ‘shade’. Alvin Hall, then director of the Bureau of Engraving and Printing backed me up.

“I dropped my fight and wrote to Alvin and he wrote back that he never knowingly signed such a letter. He said that he was often presented with a batch of letters to be signed and the letter to Emil must have been included in such a batch.

“The big question is ‘How did such a letter get laid on Al’s desk for his signature?’ Anyone knows that ink left in a press over a weekend can vary in shade when the press starts up on the following Monday.”

Herst suggested, but did not state, that Breuchig may have been tempted to arrange for the letter to be produced in a way that would benefit him financially, and that being the case, it should not be credited.

Herst also noted another holding of these sheets besides the examples found by Bruechig. He wrote, “I know that [O.K.] Rumble [from Texas] had an entire pad of 100 sheets of the stamps, some 2,500 stamps.”

So, my bottom line is this: I acknowledge that Scott No. C23c is a differentiable color, but believe that “ultramarine” is the wrong description. Further, I am unconvinced that it is any sort of rarity deserving of the values Scott quotes — though the only way to authenticate purported examples is from the signature marks on the backs of the Bruechig find.

And, finally, I believe that the Bureau letter signed by Alvin Hall is at best suspect in its conclusions, and that the variety is not an error caused by use of the wrong ink.

It is unlikely that Scott will change the listing at this late date. But there are two ways to influence that outcome.

First, if any Linn’s reader has a copy of the Bureau letter signed by Hall, I am interested in reading the exact wording used. I can be contacted via email, or by mail at Box 1125, Falls Church, VA 22041-0125.

Second, a group of these stamps needs to be analyzed against the normal blue version of Scott C23 using the National Postal Museum’s equipment. Once I have been able to arrange for that, I will report further.